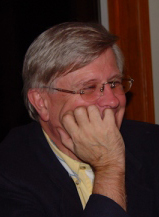 Will we risk killing the hand that feeds us — the oceans and the order of nature — for the sake of national security?

I’m not a groupie and I’m not a shouter.  I delete most of what’s in my inbox. I’m tired of all the emails telling me that the sky will fall if I don’t do this or that … give $5 by midnight tonight or sign the petition. If I don’t act now, Darth Vader will win. Delete, Delete. Trash.

But the email I just received got my attention. It alerted me to a July 10 deadline to comment on the Navy’s sonar testing program, according to whose own research will deafen 1,600 whales and dolphins and kill 1,800 more between 2014 and 2019.

ABC News reported the story on May 11:

The Navy estimates its use of explosives and sonar may unintentionally cause more than 1,600 instances of hearing loss or other injury to marine mammals each year, according to a draft environmental impact statement that covers training and testing planned from 2014 to 2019. The Navy calculates the explosives could potentially kill more than 200 marine mammals a year.

The old Navy analysis — covering 2009-2013 — estimated the service might unintentionally cause injury or death to about 100 marine mammals in Hawaii and California, although no deaths have been reported.

The larger numbers are partially the result of the Navy’s use of new research on marine mammal behavior and updated computer models that predict how sonar affects animals.

The Navy also expanded the scope of its study to include things like in-port sonar testing — something sailors have long done but wasn’t analyzed in the Navy’s last environmental impact statement. The analysis covers training and testing in waters between Hawaii and California for the first time as well.

The request to comment in my inbox took me back to the summer of 2010 when the house we rented for a week on the coast of Sequim, Was., on a beautiful salt water lagoon turned out to be next door to a highly classified Department of Energy marine research center. Ours was the last house on Washington Harbor Road, which dead-ended 200 yards away at the place whose business  was a mystery to everyone in town. 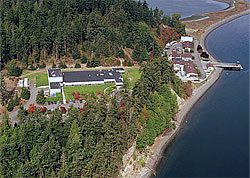 “No Trespassing,” said the sign on the fence. “Marine Sciences Laboratory, the Pacific National Laboratory of the U.S. Department of Energy, managed by Battelle. NO TRESPASSING.  Under 24-hour camera surveillance. Trespassers will be prosecuted to the maximum extent of federal  law.”

No one knew what it did. No one I asked seemed to care. In Our rental property was just around the corner on the other side of the peninsula in this photograph of the lab.

I wondered then why a marine environmental research laboratory was under the Department of Energy rather than the Department of the Interior. I assumed it must have to do with the development of oceanic energy and sustainability, but wondered why such a facility would be under wraps as top secret. I also wondered about the manager of the operation, Battelle. Clearly Battelle was one of vast network of private corporations under federal government contract, but what qualified it to manage this research center?

The email about the whales and dolphins piqued my interest again. The website for the Pacific Northwest National Laboratory says the following about our Sequim next door. The bolded print is mine.

The Marine Sciences Laboratory (MSL), headquartered at the Pacific Northwest National Laboratory’s Sequim Marine Research Operations on Washington State’s Olympic Peninsula, is the Department of Energy’s only marine research laboratory. This unique facility and the capabilities of its researchers deliver science and technology that is critical to the nation’s energy, environmental and security future.

Building upon a history of research related to marine and coastal resources, environmental chemistry, water resources modeling, ecotoxicology and biotechnology—and more recently, national and homeland security—the MSL is emerging as a leader in these three areas:

There is no way to know whether MLS was part of the Navy study. It’s under the Department of Energy. But the third area of its research operations — “protecting coastal environments from security threats” — make it a natural fit for such research or, at very least, for comment on the environmental impact of the Navy program. That the national and homeland security have been “more recently” added to MLS’ mission increases the likelihood of its being a player in this debate.

Its emerging leadership in the three areas of expertise lead me to imagine how vigorous the debate would be among the staff behind the fence next door at the end of Washington Harbor Road. Presumably those who work at a marine sciences lab are oceanographers who stake their lives on protecting Earth’s greatest treasure.  Introduce national and homeland security — i.e., national defense operations — and one can imagine how hot the debate would be among the scientists who weigh the need to protect the American coast from malicious submarine activity by means of the sonar program, on the one hand, and the job of “mitigating long-term impacts of human activities, including climate change, on marine resources,” e.g. sonar signals and explosions that render whales and dolphins deaf, disoriented, dead.

The National Resources Defense Council (NRDC), a leader in the battle to regulate sonar use and protect marine life from,  reminds us that whales and other marine mammals rely on their hearing to find food, find a mate, and navigate their ocean habitat.

If you’ve ever seen a submarine movie, you probably came away with a basic understanding of how sonar works. Active sonar systems produce intense sound waves that sweep the ocean like a floodlight, revealing objects in their path.

Some systems operate at more than 235 decibels, producing sound waves that can travel across tens or even hundreds of miles of ocean. During testing off the California coast, noise from the Navy’s main low-frequency sonar system was detected across the breadth of the northern Pacific Ocean. …

Stranded whales are only the most visible symptom of a problem affecting much larger numbers of marine life. Naval sonar has been shown to disrupt feeding and other vital behavior and to cause a wide range of species to panic and flee. Scientists are concerned about the cumulative effect of all of these impacts on marine animals.

Even the Navy estimates that increased sonar training will significantly harm marine mammals more than 10 million times during the next five years off the U.S. coast alone.

The Navy program raises the question of how we define  national security. A nation that seeks to secure itself by treating the oceans as callously as we have treated landmasses as garbage dumps and landfills is biting the hand that feeds it.

Gordon C. Stewart is pastor of Shepherd of the Hill Presbyterian Church in Chaska, and host of First Tuesday Dialogues: examining critical public issues locally and globally. He writes “Views from the Edge: Social Commentary with Gordon C. Stewart.”