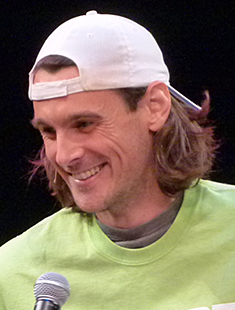 “Why do you speak out in support of the gay community?”

I’ve been asked this question multiple times, at multiple events, and every time I give the same answer: “Because it’s the right thing to do. Treat others the way you’d like to be treated.”

A simple lesson, one we all learn in kindergarten, yet one that so many people seem to forget as they go through life; as they become more preoccupied with greed, narcissism, hate, and selfishness.

Such an easy equation, and yet so difficult for those lacking empathy to solve, unable to put themselves in another person’s shoes, failing to comprehend the complete dickishness of their actions (actions they would not want perpetrated upon themselves), convinced of their own smug superiority as they try to control someone else´s life.

Because the words, “We should round them all up and send them to an island to die,” are absolutely abhorrent to any rational-minded person and should never be uttered by one member of the human race about another.

Because the actions of bullying, intolerance, and bigotry, actions that have driven (and will continue to drive) young children and adults to suicide, are actions any creature with an ounce of empathy within their soul ought condemn as the twisted depravity they truly are.

Because I wish to live in freedom, and every time I contemplate that freedom, I am reminded of a poem by Martin Niemoller:

First they came for the communists,

and I didn’t speak out because I wasn’t a communist.

Then they came for the socialists,

and I didn’t speak out because I wasn’t a socialist.

Then they came for the trade unionists,

and I didn’t speak out because I wasn’t a trade unionist.

Then they came for the Jews,

and I didn’t speak out because I wasn’t a Jew.

Then they came for me,

and there was no one left to speak for me.

TREAT OTHERS THE WAY YOU WANT TO BE TREATED. If we do not make this the cornerstone of our society, if we do not understand that infringing on the freedom of consenting adults to live their lives (in whatever fashion that happens to be) is infringing on the freedom of us all, then we will eventually join other society, culture, and civilization that has ever existed, on the trash heap of history marked “Failure” — brought there by conflicts those civilizations bred into being, conflicts between those lacking empathy and those desirous of freedom.

Why do I speak out in support of gay rights, of all rights to equality?

Because if I don’t, then who will be left to speak for me?

Chris Kluwe is the punter for the Minnesota Vikings. This piece first appeared in The Huffington Post. Reprinted with Chris Kluwe’s permission.

Why speak out for gay rights? It’s the right thing to do