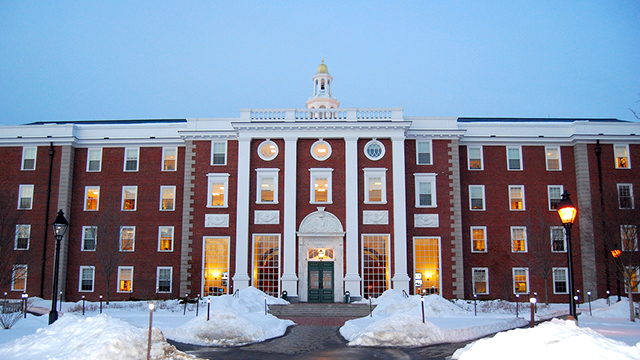 Creative Commons/Patricia DruryHarvard Prof. Harry Lewis: “One of the reasons that moral courage is lacking in the [United States] is that it is lacking in universities.”

The fall semester is an exciting time to be a college professor. The spring semester has its charms with the promise of summer and the thrill of graduation, but for me, the start of the school year is what keeps me coming back for more. My scholarly work over the summer months pays off immediately in the changes that appear on my syllabi. My batteries are recharged by a blessed absence from office politics and paperwork. And the best part is I get to encounter a new class of college students. This year many of these newcomers will be from the high-school class of 2013.

The class of 2013 is an important group of young people. Many of them would have started their academic journey in the last year of Bill Clinton’s presidency and entered first grade under No Child Left Behind. They also began the first grade around the time of the Sept. 11th attacks. For this class of young people, their academic minds have been shaped by a steady diet of high-stakes standardized tests, and their civic consciousness has been molded by a nation continuously at war.

What kind of colleges and universities will these students enter? While reading the current issue of Harper’s Magazine I discovered Harry Lewis, a distinguished professor of computer science at Harvard and the former dean of Harvard College. To give you a sense of Lewis’ thinking on the current state of higher education, I share this with you:

“One of the reasons that moral courage is lacking in the [United States] is that it is lacking in universities. As institutions, they now operate much more like ordinary corporations, fearful of bad publicity, eager to stay on good terms with the government, and focused on their bottom lines, than as boiling cauldrons of unconventional ideas sorted out through a process of disputation, debate, and occasional dramatic gestures.”

I teach at Southwest Minnesota State University, not at Harvard. And at SMSU, disputation and debate are common, though the dramatic gesture has retreated largely to the theater building! But Lewis was thinking institutionally and not about individual classes or particular events on campus. And I think he is right. I have been around colleges and universities since 1977, and in that time the institutions have become cautious. What has changed, I think, is that the austerity agenda has starved them of money. As the conservative hostility to all things “public” (including idea of a public good) has settled in as the new normal, universities have entered into a life-and-death competition for students (customers?) that has caused them to wither from the top.

Education is now seen as a personal investment, not a public good. Scarce dollars cause colleges to chase money from billionaire philanthropists who push free-market solutions to every conceivable problem. University leaders feel the need to appeal to increasingly conservative state legislators who despise government.

University governing boards, chancellors, presidents, provosts, deans and chairs (and, sadly, even most faculty) are afraid to challenge the conservative orthodoxy because they desperately want to save what is left of higher education. Colleges and universities, as institutions, used to challenge authority with facts and reason. This is less common today and stems, I believe, from the austerity agenda of the super rich.

Mentor ‘shocked one into thinking’

Eleanor Roosevelt once said of her mentor and favorite teacher, Mademoiselle Marie Souvestre, that she “shocked one into thinking, and that on the whole was very beneficial.” It is this chance to shock students into thinking, into realizing the power of their own minds and ideas, that causes me to return each fall semester.

If ever there was a class of students that needed to be shocked into thinking, it is the class of 2013. After 12 years of No Child Left Behind, too many of them have been numbed into believing that filling in bubbles can measure intelligence. Never having known a conscious moment of peace, some of them might think that war is normal.

What they need from a college is a boiling cauldron of unconventional ideas that are tested through rigorous debate and civil discourse. I fear that they will find instead institutions that prepare them only for work and not to think or, when necessary, to challenge stale orthodoxy.

Jeff Kolnick is a professor of history at Southwest Minnesota State University.