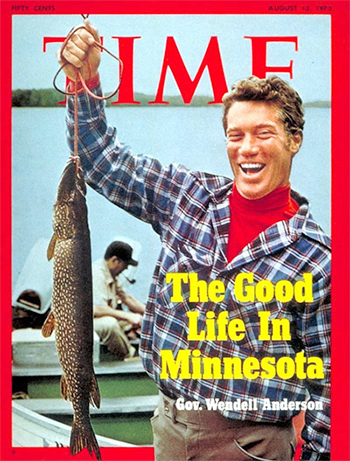 Forty years ago today, Time magazine gave Minnesota what may rank as the most welcome shot of free publicity this or any other state has ever received.

The cover of the magazine’s Aug. 13, 1973, edition featured a photograph of a beaming Gov. Wendell Anderson holding up a not particularly impressive northern pike. The accompanying headline, “The Good Life in Minnesota,” summed up the tone of the story inside.

Its central theme: At a time when inflation, Watergate and the long slog in Vietnam were draining America’s already shallow reservoir of optimism, Minnesota stood out as a “state that works,” a state worth emulating. The article struck a chord. Time’s Minnesota issue sold better than all but three of its cover stories that year.

Many Minnesotans took Time‘s affirmation as proof that their state was in fact a special place. The image of Anderson and his fish assumed iconic status.

Most Minnesotans under the age of 30 probably have trouble comprehending just how dominant Time magazine used to be. Time was arguably the most popular and influential news weekly of the 20th century. During the 1970s, its subscriber list topped 4 million and its weekly newsstand sales regularly exceeded 100,000. (Its circulation numbers have since slipped to about 3.2 million subscribers and 60,000 newsstand sales each week — not bad, but certainly not awe-inspiring in a mass-media environment dominated by the Internet.) If Time chose to put you on its cover, you knew you sat on a lofty perch of cultural significance. 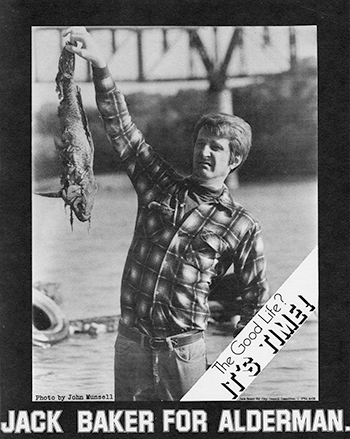 Time’s decision to feature Wendell Anderson as the personification of Minnesota’s “good life” was no accident. Minnesota voters had elevated Anderson — a modestly effective state senator — to the governorship in 1970. During his first two-and-a-half years in office, he had overseen a progressive resurgence in the state.

In 1971, he worked with the Republican-controlled Legislature to enact a series of laws known collectively as the “Minnesota Miracle.” The legislative package significantly increased state taxes and funneled most of the resulting revenue to local governments and school districts so they could, in theory, reduce property taxes. It also established the Fiscal Disparities Act, which allowed communities in the Twin Cities metropolitan area to share their commercial and industrial tax base.

The following year, with newly elected DFL majorities in the House and Senate, Anderson pushed through an ambitious legislative agenda that included increased spending for education and services for Minnesotans with disabilities, protections for organized labor, and open-meeting requirements for state and local governments. 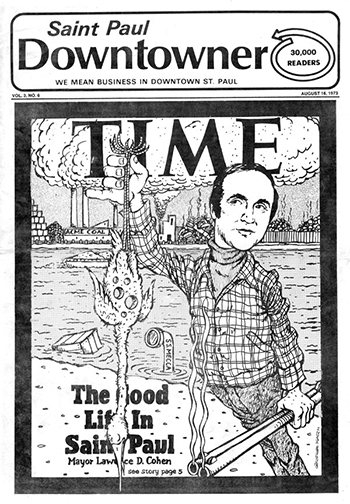 Greg Wierzynski, the Time correspondent who reported and wrote the magazine’s Minnesota essay, says Anderson’s considerable accomplishments — not to mention his good looks and blue-collar, St. Paul East Side background — made him a logical choice for the Time cover. “Time, by tradition, covers events through people,” he says. “So from the very outset we decided to put him on the cover.”

Wierzynski had come up with the idea for a Minnesota cover story after reporting on the 1972 DFL precinct caucuses. The “civility” demonstrated by the state’s caucus-goers impressed him. “It just struck me that this state was very worth a story,” he says. “This was a place that was working.”

His bosses back in New York didn’t need much convincing that the story was worth pursuing. It didn’t hurt that Time’s editor-in-chief, Hedley Donovan, was a Minnesota native.

The iconic cover shot, with the flannel-clad governor and his 18-inch northern (the identity of the angler who actually reeled in the fish remains a matter of dispute) accompanied a 12-page spread featuring plenty of pretty pictures. Wierzynski started his story with descriptions of bucolic scenes:“Barefoot children play one old cat and race their wagons down gently sloping sidewalks.” 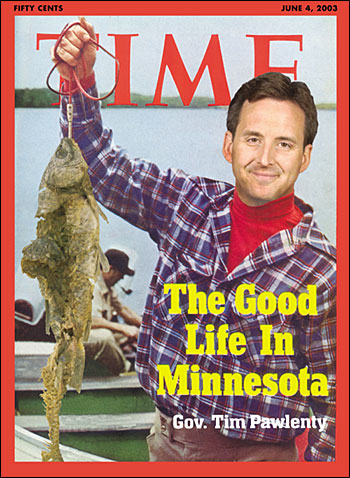 He then moved on to what he considered the state’s defining characteristics: its well-balanced economy, its well-mannered populace, its engaged corporate community, its thriving arts scene, its wealth of natural resources — and mosquitoes “half the size of dive bombers.” But the bulk of his story focused on politics, public policy and Anderson’s role in forging what Wierzynski described as a new progressive consensus. As he saw it, Minnesotans under Wendell Anderson had proved to be unusually civic-minded citizens who supported shared sacrifice “in return for good services and social benefits.”

The progressive consensus that Wierzynski and Time magazine discerned back in 1973 has retreated in the years since then. Even in this current liberal moment of 2013, our DFL governor and DFL-controlled Legislature seem unwilling to consider the kind of broad based, share-the-sacrifice tax increases that helped pay for new public initiatives during the early 1970s. (These days both our political parties seem to believe that when it comes to raising taxes, middle-class Minnesotans — or at least those who don’t smoke — should be immune.)

Still, it’s comforting to recall that there was a time, not so long ago, when the most influential news magazine in the country thought our state could serve as an example for the rest of the nation.

Time’s Minnesota cover story was a nice pat on the back at the time it came out. Its theme, “A State That Works,” might not fit Minnesota as comfortably as it once did, but it’s still a title worth aspiring to.

Dave Kenney is co-author, along with Thomas Saylor, of the history book “Minnesota in the ’70s,” which will be published by Minnesota Historical Society Press in October. He also blogs at mn70s.tumblr.com.