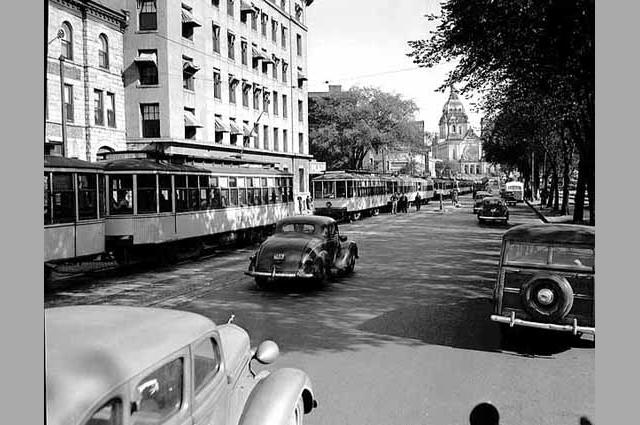 As a kid growing up in the late 1940s, I watched streetcars roar by my grandparents’ house on West Minnehaha in St. Paul. At 5, I wanted to be a streetcar motorman and begged my grandparents to take me streetcar riding. Over many Saturdays we covered every line in the system from Hopkins to Mahtomedi, and even managed to persuade a company official to give us a tour of the Snelling shops.

I have wonderful memories of that era, and if there were a time machine I’d dial up 1948 and go back for one more ride. Today, there are proposals in both Minneapolis and St. Paul to build that time machine and return streetcars to our streets. I wish I could dream that dream, but memories are where the streetcars belong.

In 1920, 238 million people rode streetcars. Twenty years later, just 104 million came aboard, and, with the exception of a brief recovery during the gas rationing days of World War II, riders never came back. The Twin City Rapid Transit Company tried to woo them with 141 new streetcars after World War II, but a suburban building boom was getting underway, and ridership kept right on tumbling. The company lost almost $1 million in 1949 and was headed for bankruptcy. Banks were unwilling to loan money. There were no public subsidies, and there was no interest in forming a public transit commission. Worse, the Minnesota Railroad and Warehouse Commission resisted the company’s requests for fare increases to cover increased operating expense.

It cost 20 cents per mile in 1947-48 to operate buses, 28 cents per mile for streetcars. The cost difference can be attributed to the hundreds of additional employees in the shops, track and power departments and a huge capital investment in a physical plant that was slowly wearing out. Most streetcars were 50 years old and, although exceptionally well maintained, were coming due for replacement. Complicating matters, the company was running out of cash just to keep the system going, much less extend its tracks to new markets in the suburbs.

The alternative was to convert to buses and on June 19, 1954, the last streetcar pulled into East Side Station ending decades of streetcar service in the Twin Cities. The conversion was tainted by skullduggery on the part of company officials, who stole more than $1 million in a series of kickback schemes involving scrap metal and real estate sales. The culprits went to prison and the system struggled on until the Metropolitan Transit Commission took over transit operations in September 1970.

There’s a popular urban myth that General Motors was responsible for all this and conspired with oil and tire companies to do away with streetcars.  If it did, then blame anyone who bought a Chevrolet between 1920 and 1950. They’re all unindicted co-conspirators. Call it creative destruction, or progress; the fact is that the automobile was simply a more convenient way to move around the Twin Cities. That hasn’t changed and won’t change in the foreseeable future.

The numbers tell it all. In 1920 there were almost 70,000 licensed automobiles in Minneapolis and St. Paul By 1940 there were 250,000. Today there are almost 6 million in the entire state and despite an increase in the local population from a half million in 1903 to almost 3 million, today, Metro Transit is carrying only as many passengers as Twin City Rapid Transit did in 1903. And, barring a catastrophic increase in energy costs, or a profound change in lifestyles, or public policy, there is very little chance that these numbers, or the economic behavior they represent, will change, drastically, anytime soon.

That doesn’t mean we shouldn’t invest in transit improvements and provide alternatives to the automobile. However, we have to make smart choices. One was the Hiawatha Line. It opened in 2004 and broke all ridership projections. This June the Central Corridor line will begin service between Minneapolis and St. Paul

As for streetcars, the sad fact is that nothing has changed since 1954. They cost more to operate. Their infrastructure is expensive to build and maintain, and they come with serious operational issues. You can’t detour streetcars around an accident or a street blockade. A mechanical breakdown can tie up an entire line.

I recall one such incident I witnessed in downtown St. Paul. A streetcar managed to derail going through a switch at Fifth and Wabasha. By the time the mishap was cleared some 40 streetcars were queued up all the way to the State Capitol. My grandparents and I were two hours late getting home. The story was front-page news. In March of 1952 we were caught in a snowstorm in downtown Minneapolis with similar results.

I’m reminded that Portland is often cited as a streetcar success story, but Portland doesn’t have to contend with snowstorms and subzero temperatures.

It’s claimed that streetcars will attract more riders, but there is no evidence they do. Arguably, there is permanence to a streetcar line and that may be a factor in new development, but the question becomes, are we trying to encourage and indirectly subsidize developers or deal with transportation issues?

Minneapolis proposes to spend $200 million on a streetcar line on Nicollet Avenue. I loved the streetcars and regret that I’m being critical of them now, but with transportation dollars scarce, they’re a dubious use of resources, especially when that $200 million is a downpayment on years of increased operating expense and questionable reliability. Better to put the money to work improving bus service, or building a light rail line along the Midtown Greenway corridor.

John Diers is the author of “Twin Cities by Trolley: The Streetcar Era in Minneapolis and St. Paul” and “St. Paul Union Depot,” both published by the University of Minnesota Press.

Streetcars belong safely tucked into our most cherished memories