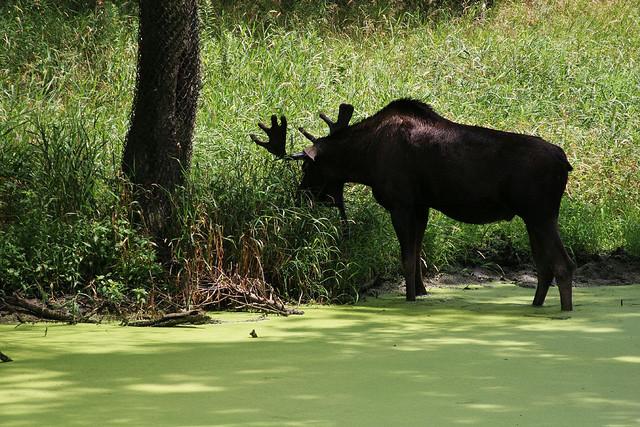 CC/Flickr/Rachel Knickmeyer
The iconic moose hovers in the shadows while the sulfide mining debate has focused on the narrow, predictable and false argument of jobs versus the environment.

Water shimmies down the antlers and fur of the world’s largest member of the deer family — the moose. Steeped in water up to its chest, the image speaks to the wonders of our northern boreal forest and captures the picture every tourist wants to see. Yet, the iconic moose hovers in the shadows while the sulfide mining debate has focused on the narrow, predictable and false argument of jobs versus the environment. 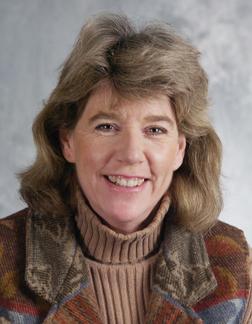 No mention of the moose can be found in the 2,000 pages of the new Supplemental Draft Environmental Impact Statement (SDEIS) regarding PolyMet’s initial copper mine in northeastern Minnesota. How can this animal be neglected? The moose has attracted millions of research dollars, hundreds of media reports and a recent downgrade designation as a Species of Special Concern. The moose population count released Feb. 14 by the Department of Natural Resources confirms a steady but still mysterious decline, especially in calves.

The first PolyMet sulfide mine project proposes to drain 93 wetlands in approximately 6,500 acres of Superior National Forest. This is part of moose country. Wetland destruction is supposed to be mitigated with either a trade or a replacement. Neither option is ideal. Minnesota is host to several types of wetlands usually delineated by depth, vegetation, location etc. The key factor is that each wetland is unique to that watershed. When sulfide-mining discussions arise, the value of wetlands is structured around costs and ratios, not the wildlife factor or its impact. Aiken County, far from prime moose habitat, is the destination of many wetland trades.

One thing is clear. Moose are dependent on clean water for survival. Some key results of moose studies from northern Minnesota and Isle Royale, Michigan illustrate that relationship. Healthy moose are designed to exist through winter, even the old-fashioned one we are facing in 2014, but that survival relies heavily on high-quality forage in the summer. In 2004, Keren Tischler’s studies showed intake from aquatic plants range from 14 percent to 37 percent of their diet.

Clean aquatic habitats readily attract moose because the vegetation has 20 percent higher crude protein and 1.5 times more nitrogen per carbon atom in comparison to terrestrial plants. Tischler’s 2011 follow-up study found that moose slightly prefer submergent vegetation such as the yellow pond lily, but they did not discriminate amongst rhizomes, stems and flowers from the 88 species of aquatic vegetation. This summer diet and intake of nutrients is important for replenishing fat storage and cow pregnancy rates the subsequent year.

Fewer water resources will affect the cow/calf ratio and survival rates. Famed wolf and moose researcher Rolf Peterson concluded in 1983 that moose calves are born near water. It is an established anti-predator behavior used to avoid and escape from wolves and bears. In addition, Timothy Ackerman determined in 1987 that moose suffer from heat-related stress and the wetlands and other waterways cool their bodies. Will fewer heat sink water resources add to the numerous other ailments causing the decline of Minnesota moose? A current Minnesota study with radio-collared moose will map locations that will result in an applicable estimate of wetland use in this region. Shouldn’t we wait for that conclusion?

A final study by Clifford and Witmer in 2004 cites moose facial anatomy that ends in a long, somewhat bulbous, overhanging nose as specifically adapted to aquatic feeding — sometimes 16 feet below the surface. Underwater video has captured moose swimming effortlessly while skimming the bottom water table choosing from a menu of tasty tidbits.

How will sulfides from copper mining affect this critical aquatic vegetation? Will the sulfides sink to the lower water levels distressing key nutritional values?

These studies illustrate the strong inner relationship between clean water and the moose population. No decisive conclusions are forthcoming to determine the plummeting moose population dynamics. The focus has been on climate change, winter tick infestation, liver flukes, wolf predation, parasites and deadly brain worm hosted by white-tailed deer. There are a host of problems, yet there is clear evidence that clean aquatic habitat can be an asset for moose and a tool for its long-term sustainability in Minnesota.

How can the moose be omitted from these critical environmental impact studies? How can our natural-resource experts deny the needs of this declining 1,200-1,500 pound animal? If an animal that stands 7 feet at its shoulder is ignored, it doesn’t bode well for the wood frog, four-toed salamander, wood turtle, fish and the many other species that lack the attention of the press and research dollars.

There is one month left to comment on the SDEIS. Visit the home page of www.dnr.state.mn.us and call your local legislator. Sulfide copper mining will leave a large footprint on our northern forests and water resources. For the many Minnesotans who willingly voted to raise their own taxes for clean water in 2008, we need to add our comments — for our children, grandchildren and for that picturesque moose wading through the marshes.

Nancy Gibson, of St. Louis Park, is the co-chair of the Legislative Citizen Commission on Natural Resources and co-founder of the International Wolf Center.

Where are concerns for Minnesota’s moose in the copper-sulfide mining debate?