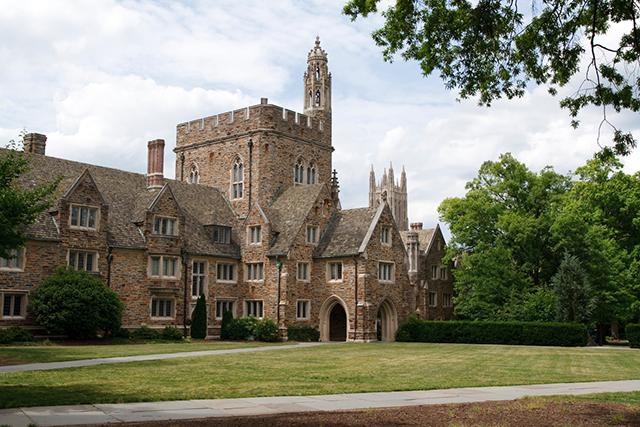 CC/Flickr/Nan-Cheng Tsai
For a family living on the 2011 median U.S. salary of $50,054, a private university education is either truly unattainable or is something that will be financed by a combination of some grants, probably a lot of loans, and a lot of work of some sort done by the student.

What I thought I’d hear more of, save for a March 13 Washington Post column, is how the high cost of higher education really may be why Weeks spends her school breaks as a Rough Sex Specialist.

Within the last year or so, we’ve heard a lot about how a college education has become nearly unattainable for many in the working and middle classes. What we’ve not heard enough about is what some current and would-be college students might feel they must do to pay for a quality education, aside from taking out loans in amounts that might buy decent homes in many areas.

Information on Duke’s website shows that the average one-year cost for a Duke undergraduate is $61,404, including $45,620 in tuition. It has been said that Weeks’ mother recently lost her job and that her father is an Army physician. We don’t know the actual Weeks family financial circumstances, though it was reported in the March 10 Daily Mail (U.K.) that her father earns more than $200,000 per year and that her parents own a $477,730 Spokane, Wash. home, carrying a $460,607 mortgage.

We do know that for a family living on the 2011 median U.S. salary of $50,054, a private university education is either truly unattainable or is something that will be financed by a combination of some grants, probably a lot of loans, and a lot of work of some sort done by the student.

Duke’s website also contains guidelines as to how education might be financed for a student coming from a family with a $55,000 annual income. Duke, like many private as well as public schools, says the majority of its financial aid is based on need rather than on merit. As such, Duke says that with a $55,000-per-year family income a student could expect to have his or her family contribute $2,200. Another $2,200 would come from a work-study job, there would be $3,000 in loans, and grants would cover $54,104.

As I said, we don’t know the exact circumstances of the Weeks family finances but my guess is that Weeks likely would not qualify for that much grant support. She may qualify for those loans that could buy a house in cities like Dallas or Bangor, Me. So, instead of owing a house for her elite university education, Weeks decided, while working the waitress job she had in high school, that she was “being degraded ” and turned to porn. It has been reported that Weeks earns between $1,500 and $2,000 per film shoot. Let’s face it, few waiters, even the most experienced ones working in the poshest places, regularly take home $2,000 a day ferrying lobster and champagne to the swells. If they ferry drugs or flammable secrets, that might be another story.

How about public schools?

Some have said Weeks could have been like many of her peers and chosen a less expensive school — maybe even a public university. Basic tuition for 13 or more semester credits for an in-state student at the University of Minnesota currently costs $6,030. Add the expenses Duke estimates for room ($6,354), board ($5,580) and books/personal expenses ($3,580) and you’re still talking $21,544 per year. That’s not a sum that would be easy for that $50,054 median-income American family to fork over annually, but any loans that might be needed probably would not buy any sort of house.

Still, the $29,400 the average student owed in loans in 2012 is not easily paid off if the student is among the young people who have been greatly affected by the Great Lingering Recession, living with parents and earning (if they’re lucky) about $1,000 per month as minimum-wage baristas or clerks.

And if you want to talk about shame and degradation, that last outcome is one that is particularly worthy of such feelings.

College costs: ‘Belle Knox’ aside, the real shame is that many can’t see higher ed in their future