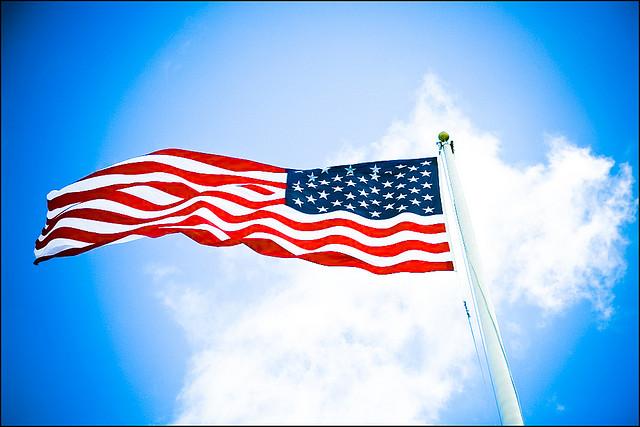 CC/Flickr/bennnjaamin
“Hail, thou flag of our fathers, flag of the free!”

If it were up to a student in Sebeka, Minn., the practice of patriotism would be back in style.

“In order to be patriotic, one must be proud of the good things one’s country has done for the world,” wrote eighth-grader Ashley Etter in a winning 2013-2014 Patriot’s Pen essay contest sponsored by the VFW of America. Integrity, conviction to meaningful values and carefully looking out for one’s neighbor are also essential components of patriotism, says Etter.

The trouble is, according to Etter, patriotism “seems to be a rather old-fashioned thing in today’s society.”

“In a nation that has always been largely composed of immigrants, public schools have often taken on the role of promoting national cohesion by fostering attachment to the nation among diverse populations of students,” reads a line of the report. Such “felt attachment” — or patriotism — it continues, is avoided in U.S. schools for a number of reasons:

From these numerous bases for objection, it appears patriotic “perfection” has become the enemy of the “good,” resulting in patriotism’s being completely left out of school curricula. Simply promoting awareness of national identity by celebrating holidays, singing the national anthem at sporting contests and presenting a narrative of historical events in required coursework does not equate to patriotism, the Stanford University and University of Washington at Seattle-sponsored-report says.

In a state always willing to “march to its own drummer,” what standards do Minnesota public schools have in place regarding patriotism?

The good news is Minnesota K-12 Academic Standards place citizenship at the heart center of the social studies model for the academic disciplines of history, economics, geography, and citizenship & government.

Unfortunately for land-of-liberty lovers, however, the standards’ objective flavorlessness for the flag reflects the lack of a “felt attachment” the national civics experts have identified. How else can one explain a description so long on logos and short on pathos to dryly include in its values substrand: “The civic identity of the United States is shaped by historical figures, places and events, and by key foundational documents and other symbolically important artifacts.”

The ‘ultimate form of patriotism’

Orville Lindquist, a 14-year state program executive for Minnesota’s YMCA Youth-in- Government, also sees the need for more patriotic heart and soul in education. Even YIG, he allows, has no official position on patriotism for the thousands of Minnesota’s eighth- to 12th-graders who take part in it:

“(We) tend to believe that “living” the process tends to promote respect for the process … and that participation is the ultimate form of patriotism,” said Lindquist, who reported that Youth-in-Government’s 26-year-old Model United Nations program participation doubled from 200 to 400 students in the two years after 9/11.

(Note: YIG’s Youth Model Assembly is the standard program the majority of students participate in.)

Given his druthers, Lindquist would enjoy seeing an observant-but-constructively-critical form of patriotism in education — somewhere between outright rejection and total devotion — but believes achieving even this will be difficult.

Challenging as it may be, putting the “red, white and blue” back into our state’s civics education could be a healthy thing for schools to do.

An example of a “felt attachment,” excerpted from “Apostrophe to the Flag,” written by Maria Sanford, professor emeritus of the University of Minnesota (1880-1909), whose likeness is one of two representing Minnesota in the U.S. Capitol’s Statuary Hall:

Hail, thou flag of our fathers, flag of the free!

… Glorious and beautiful flag of our fathers, the Star-Spangled Banner, beautiful in thine own waving folds, glorious in the memory of the brave deeds of those who chose thee for their standard!  More beautiful, more glorious is the great nation which has inherited their land and their flag if we, who claim, who boast our lineage from these heroes gone, if we inherit not alone their name, their blood, their banner but inherit their nobler part, the spirit that actuated them, their love of liberty, their devotion to justice, their inflexible pursuance of righteousness and truth.

… Press on, press on, glorious banner, bearing this message to all the peoples:

‘Our hearts, our hopes, are all with thee;

Our hearts, our hopes, our prayers, our tears;

Our faith triumphant o’er our fears

John Hakes is a community advocate and writer who resides in Shoreview.