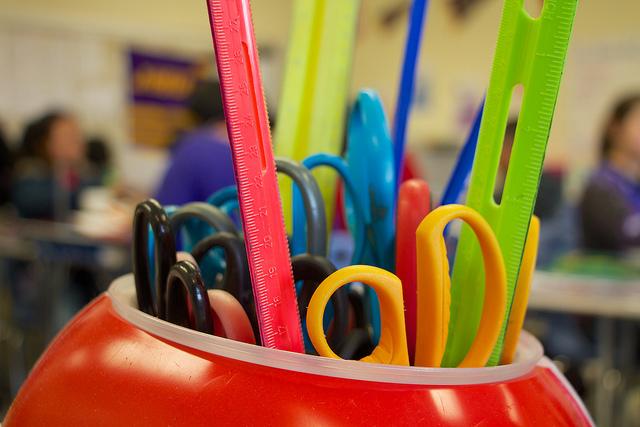 CC/Flickr/Tim
Too often, rather than celebrating children and their gifts and talents, their aggregate data is used to shame them and their families and to reinforce false notions of inferiority.

It is no secret that many parents, educators, advocates and policymakers are concerned about the current state of public education. Indeed, we have a right to be concerned. Education, after all, is one of the most important gateways to upward mobility and opportunity in our society.

For a child born into poverty, having access to a high-quality education may be the difference between being locked out of mainstream society and gaining the opportunity to become a contributing member. A high-school diploma may also be the difference between a child being on a pathway to prison or a pathway to college, as studies show that a black man without a high-school diploma is six times more likely to end up in prison. Young people who graduate from high school, at a minimum, have a decent chance of finding entry-level employment, going to college and identifying a career path.

Although graduating from high school should be the bare minimum expectation for those attending our public schools, for far too many of our youths it is a goal that appears out of reach. From my vantage point as a parent, educator and civil-rights attorney, this is unacceptable.

The current climate in public education makes it easy to ignore the systemic and structural issues that play a role in determining whether a child will graduate not only with a basic diploma, but more importantly the knowledge, competencies and skills to compete for the jobs of today and the future.

Additionally, my own experience in navigating the public school system and encountering prejudicial attitudes and preconceptions based on race has given me insights into the barriers and hostility that parents of color generally face when advocating for their children. I have also seen how structural racism can be reinforced through policy decisions, and yet remains invisible to the naked eye. Some examples include an inequitable allocation of resources, such as schools in more affluent communities receiving a disproportionate share of monies and institutional support, policy decisions that exclude children (particularly children with special needs) from classrooms, limited access to gifted and talented programs and advanced placement options in under-resourced schools, and too many children crammed into classrooms.

Structural racism also manifests in harsh, punitive approaches to minor disciplinary infractions, leading to excess suspensions, arrests and administrative transfers of children of color, and particularly African-American boys. Additionally, structural racism manifests through a lack of cultural competency (too few teachers of color and teachers’ inability to engage students of color), limited access to college and career counseling, and a disturbing disconnect between parents, community, educators and administrators. I would posit that within the public school system structural racism is hidden, and it wears a mask – which some label as the achievement gap.
Solvable problems, if there is political will

The gaps are symptoms

The achievement-gap terminology, although a misnomer, is used so often by those discussing the challenges within public education that it has become a term of art or catch-all phrase to explain away the disparities. Yet, the racial gaps in reading, math proficiency and graduation rates are not the actual source of the problems; they are merely symptoms of systemic problems that reinforce inequality. Surprisingly, these problems are actually solvable. But is there political will to do so?

Instead of working collectively to eliminate the barriers and to strengthen the quality of the educational experience for all children, and especially the most vulnerable, what we find too often is a skirting around of the real issues and bickering by adults who ought to know better. At the end of the day, either we care about the well-being of children or we don’t. I hate to say it, but it feels as though concerns about vulnerable children are secondary within public-education debates. Our perspectives would drastically shift if we were to view children as clients that we must serve instead of pawns that we can use. Taking this approach would put the best interests of children at the forefront, as opposed to on the periphery of the issues.

Too often, rather than celebrating children and their gifts and talents, their aggregate data is used to shame them and their families and to reinforce false notions of inferiority. And if children live in poverty, our prognosis is one of doom and gloom and we act as though there is no hope, which defies logic and negates the purpose of education. Certain parents are blamed for nearly every challenge their children encounter and are often made to feel that defects in character, judgment or morality are responsible for the poor outcomes their children face.

Beyond that, the current paradigm in public education discourages critical reflection and intellectual curiosity about whether white children are actually being as well-educated as they could be or whether we are satisfied as long as their test scores remain above a certain level. The prevalence of expensive tutoring centers in many suburbs prompts the question of whether many white parents are forced to obtain supplemental support to enhance the educational outcomes of their children.

I do not have all the answers, but these questions must be raised to push us from complacency toward a new asset-based paradigm that reframes the discussion and operates through an equity lens that reshapes the system to accommodate the needs of all children and validates their worth and full potential.