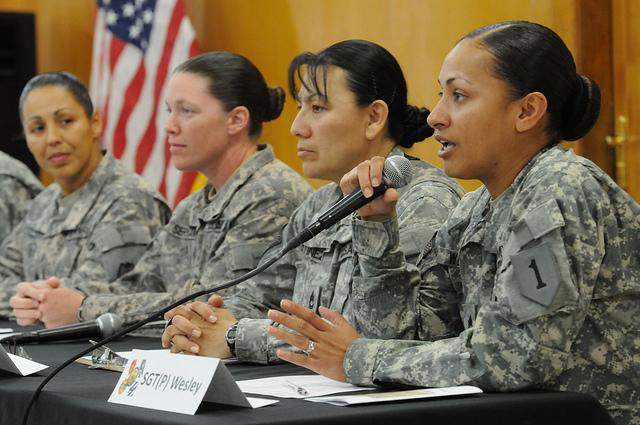 More than 200,000 women are currently in active duty in the U.S. military, one out of every seven people in today’s military. More than 280,000 women have served in Iraq and Afghanistan since 2001. These women, like all military personnel, have been involved in a range of capacities, from desk jobs to active engagement in firefights. Women made up 67 of the nearly 3,500 Americans lost in hostile fire in Iraq and 33 of the 1,700-plus killed in combat in Afghanistan; more than 600 other women in Iraq and 300 in Afghanistan were wounded.

A recent study found that more than half of the women serving in the U.S. Army in those locations experienced combat-related trauma. Like their male counterparts, women veterans returned to their lives at home scarred from their experiences in war: exposure to enemy artillery and rockets and seeing others wounded and killed.

But women in the U.S. military are experiencing another form of war-related trauma: that of being victimized sexually in what is labeled Military Sexual Trauma, MST.

MST is defined by the Department of Veterans Affairs as “experiences of sexual assault or repeated, threatening sexual harassment that a veteran experienced during his or her military service.”  A report in the New York Times in March, 2007, which surveyed women soldiers’ experience in Iraq, showed that they had significant incidences of post-traumatic stress disorder from the combination of combat stress and sexual assault.

Although both men and women are subjected to MST, the Veteran’s Health Administration found that 1 in 5 female veterans experienced MST as compared to 1 in 100 male veterans.

According to a 2011 Newsweek report, women are more likely to be assaulted by a fellow soldier than killed in combat. The Department of Defense estimates there are about 19,000 sexual assaults in the military per year, but according to the latest Pentagon statistics (2013), only 1,108 troops filed for an investigation during the most recent yearly reporting period and during that period, only 575 cases were processed. No outside audit has been conducted of the military’s numbers. Of the cases processed, only 96 went to court-martial. That means that less than .005 percent of the assaults resulted in court-martial. This is shocking and illustrates at least three grave problems.

First, women are subjected to sexual predation in the military as in other settings. However, sexual assault in combat settings such as in Iraq and Afghanistan seriously jeopardizes women’s safety and exacerbates already-grave physical and psychological stress. Second, the rate of investigation and prosecution is very low. The fact is that many perpetrators of assaults are typically of higher rank and can easily coerce and intimidate their victims into silence. Third, most veteran services have historically been designed and delivered for men because the proportion of women in the military has been much lower. This suggests that programs to address the unique needs of women are much less widely available than similar services for men.

These issues are explored in a deeply-moving play at the History Theatre, 30 East Tenth Street, St. Paul, titled “Lonely Soldiers:  Women at War in Iraq.” The play runs from March 16 to April 6, with a special workshop by World Without Genocide on Saturday, March 22, titled “Women in War:  Exploring Issues of Sexual Harassment, Violence, and Trauma.”  Speakers will address laws of war and laws to prosecute military perpetrators; types of services available to women with MST; and the recent UN resolution 1325 to involve women in post-conflict settings.

(Registration is required by March 20. The workshop is open to the public; fees are $40 public, $25 students, $80 for those seeking 2.5 Standard CLE credits. Fees include the workshop, lunch, and a matinee performance of the play.)