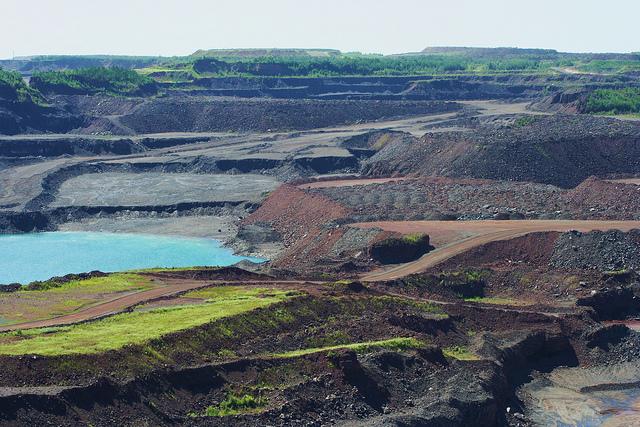 CC/Flickr/Lars Hammar
Most of the Skurla report’s projected job gains are in the iron mining industry, a long-established and far less controversial form of mining.

The following column was originally published in the Timberjay newspapers of Ely, Tower-Soudan and Cook-Orr.

For more than three years, advocates for copper-nickel mining have pointed to the study produced by Jim Skurla, of the Labovitz School of Business at the University of Minnesota-Duluth, as a key justification for moving forward with this new type of mining.

The study, first released in 2009 and updated in 2012, touted huge impacts from planned new mining projects, in terms of jobs and new tax revenue to the state and local areas.

We’ve all heard the numbers from Skurla’s report cited by mining proponents — as many as 5,000 new jobs in what they term the “strategic mining sector” if all the proposed projects move forward as planned. To supporters, such numbers portend an economic renaissance for our region.

While the media bears much of the blame for failing to delve into the details of Skurla’s analysis, the study itself is somewhat confusing because it masks the relatively limited economic impacts of planned nonferrous mining projects identified by Skurla by combining them with the much more significant proposed developments within the iron mining industry.

It’s the kind of inappropriate lumping of data that is unhelpful by nature. For example, if you combine my annual income and Warren Buffett’s annual income, we’re talking about billions of dollars a year. But that doesn’t tell you very much about my annual income, does it?

It’s the same thing with Skurla’s report and nonferrous mining.

Remember those 5,000 new mining jobs by 2016 touted in his report? They’re in there. His report projects 5,029 new jobs to be exact. But those are in the iron mining industry, a long-established and far less controversial form of mining.

So how many permanent new mining jobs does Skurla project in the copper-nickel sector, by 2016? A total of 427. It’s true that Skurla’s report also projects about 1,000 temporary construction jobs, but most of those jobs last less than two years.

Skurla’s report also projects indirect and “induced” jobs as a result of mining expansions. In the iron-mining sector, his report predicts about 9,000 additional jobs connected in some way to the new projects being planned.

While we all like to think of “mining” jobs as high-paying, most of the indirect and induced employment involve the same kind of service-oriented jobs that employ most of our residents right now. According to Skurla’s analysis, the single biggest indirect and induced employment sector as a result of mining expansion is food service. That’s right — cooks, waiters, and waitresses in bars and restaurants. In other words, in many cases, we’re talking about the same kind of jobs typically associated with the often-maligned tourism sector.

A relative drop in the bucket

Skurla predicts that nonferrous mining will produce another 808 of these indirect or induced jobs by 2016. Compared to the 9,000 new jobs projected as a result of iron mining expansions, it’s a relative drop in the bucket. Indeed, in every case, more than 90 percent of the new jobs and economic output that Skurla projects in his study comes from projects in iron mining. In other words, whether copper-nickel mining occurs at all will have little impact on Skurla’s predicted mining boom.

And it will also have even less impact on the generation of new tax revenues. While the tax contributions of the taconite industry have failed to keep pace with inflation in recent years, as we recently reported, they still dwarf whatever likely tax contributions the region will see from copper-nickel mining. Even local legislators have acknowledged to me that the tax benefits of copper-nickel are likely to be quite small. Indeed, right now the production tax, at $2.56 per ton, is the single biggest tax generator in the mining industry, and it only applies to iron ore. Besides, as Sen. Tom Bakk recently noted, the copper-nickel industry measures its production in pounds, not tons. No one seems to want to talk about what a new nonferrous mining tax regime might look like. Without a new approach, the tax generation from the exploitation of the Duluth complex will be insignificant compared to the taconite industry.

Unfortunately, the distinctions in Skurla’s report between the benefits of ferrous and nonferrous mining were somewhat lost in the inevitable oversimplification that takes place whenever controversial subjects are discussed by the public. And some nonferrous advocates have taken advantage of the confusion, not only to exaggerate the likely economic benefits of this potential new industry, but to target critics as opponents of mining in general, rather than as opponents of copper-nickel mining specifically.

Allete Chairman and CEO, and PolyMet board member, Alan Hodnik, who spoke last Friday at the Laurentian Chamber of Commerce annual meeting, told an audience of over 200 local business leaders that the Iron Range’s “way of life” is under attack by critics who oppose the PolyMet project. It was the kind of hyperbole we’ve heard too many times before by copper-nickel mining boosters, and it was indicative of the political decision they have made to push their more controversial proposals by linking them to much more broadly supported expansions in the iron mining industry.

To me, it suggests an underlying insecurity on the part of copper-nickel supporters— namely a fear that left to stand on their own, the public will decide that the relatively limited economic benefits (at least as portrayed in Skurla’s report) are outweighed by the potentially significant environmental costs.

To be fair, it’s not clear that Skurla’s report encompasses all the potential new jobs resulting from nonferrous mining. He doesn’t specify which planned or proposed nonferrous projects he included in his analysis. We only know that it’s more than just PolyMet.

Of course, at this point, it’s all pretty speculative anyway. While many of the proposed expansions in the iron mining industry are already under way, I’d be surprised if we see any nonferrous mining by 2016, as Skurla’s analysis assumes. Anything beyond PolyMet is unlikely anytime before 2020. And a lot of things can happen between here and there.