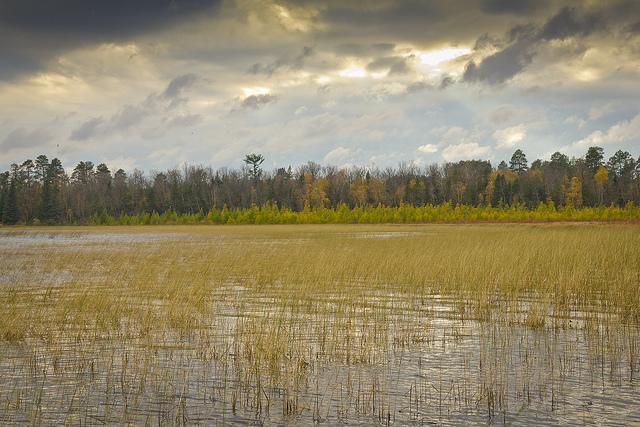 CC/Flickr/Brett Whaley
This is Minnesota’s watershed moment, literally and figuratively.

The Minnesota Pollution Control Agency (MPCA) announcement came just two weeks before public comments were due for PolyMet’s Supplemental Draft Environmental Impact Statement. PolyMet’s proposed NorthMet Mine is the first in a long line of sulfide mining projects aimed at turning Minnesota’s Superior National Forest, the lake country of the Arrowhead, into a sulfide-mining district — a district that would impact both the Lake Superior and Rainy River watersheds, arguably in perpetuity.

The announcement? The MPCA had decided overnight not to release its recommendation to maintain or to change the 10mg/L sulfate standard for wild rice waters. Results from the MPCA wild rice study, released earlier, looked promising that the sulfate standard would be upheld. The timing of the agency’s postponement was too coincidental, too sudden, and it just plain reeked. Now we know the stench was real. Investigative digging by the Star Tribune’s Josephine Marcotty uncovered its source: “Iron Range rebellion halted wild rice initiative.”

In 2010, when the MPCA finally decided to start enforcing the sulfate standard, the howls of protest from Iron Range legislators, sulfide mining lobbyists, and the Minnesota Chamber of Commerce could be heard echoing throughout the state Capitol. The Chamber of Commerce sued and lost. Unfortunately Gov. Mark Dayton and the Legislature initiated an unnecessary $1.5 million (taxpayer funded) wild-rice study; and now when the study did indeed indicate the current sulfate standard is reasonable and defensible, Dayton and MPCA Commissioner John Stine are again running for cover. Whatever happened to backing up your scientists instead of caving to political and corporate interests?

Whatever happened to putting the health of the public front and center? The people of northeastern Minnesota have been corporate victims for far too long. And saying so is not denigrating the Iron Range heritage, much as certain Range politicians ratchet up inflammatory rhetoric.

What’s preventing a hard look at the industry?

It is long past time to take a hard look at the mining industry in Minnesota, an industry that still does not meet state water- and/or air-quality standards at any of its currently operating taconite mines. Why not?

Take your pick: lack of enforcement by agency heads; political blackmail by entrenched Iron Range legislators under the guise of jobs; familiar threats by mining corporations to close their doors and leave; or the machinations by the Chamber of Commerce, paying for its own crazed wild-rice report stating that sulfate standards are unnecessary or could be set at 1600 mg/L., with PolyMet Mining, US Steel Corp., Xcel Energy, and the Koch Brothers (Koch Companies Public Sector, LLC.) represented on its board of directors.

Minnesotans continue to be told we should welcome foreign mining corporations with reprehensible records who will magically be able to do a perfect job with sulfide mining, an even more toxic mining process for our waters than taconite. We are told to believe that the decisionmakers at state agencies will suddenly start demanding adherence, insist on writing and enforcing strong water quality standards, never bowing to political pressure. We might as well believe in Santa Claus and the Tooth Fairy.

Again, as in 2007, no one involved in responding to the wild-rice study is thinking foremost about the health of the people, in this case especially the health of our children.

Whoa, someone will say. This is about wild rice, not about people.

Really? Those same sulfates that ultimately lead to damage of wild rice also ultimately lead to damage of our children through conversion of inorganic mercury to methyl mercury. [“Methyl mercury is particularly damaging to developing embryos, which are five to ten times more sensitive than adults.” (USGS)] In 2011, the MDH released its study, “Mercury in Newborns in the Lake Superior Basin.” In Minnesota, 10 percent of tested newborns were above “safe” levels for methyl mercury.

It is not just the fish we eat that we need to be concerned about either. Studies in California have shown that wild-rice plants apparently have the capability to uptake methyl mercury to the seeds. Yet the Minnesota Chamber of Commerce was adamant that methyl mercury could not be discussed during the wild-rice/sulfate standard study.

To past and present Chamber of Commerce executives, attorneys, and board members; corporate lobbyists; power and mining industry executives; Iron Range legislators; Minnesota governors; Minnesota Department of Natural Resources commissioners, Land and Minerals Division directors; MDH commissioners; and the MPCA commissioners and directors who initiated the use of variances and consent decrees, who just a year ago abruptly walked away from a million dollar four-year project (TMDL) designed to identify sources of mercury pollution in the St. Louis River: Ask yourselves how many people have died or been physically or neurologically damaged by your actions or inactions.

How many have died from mesothelioma or from other mining-related health issues, deaths that may have been prevented? How many lives have been shortened? How many children have been brain damaged? It is time we talk about accountability and responsibility.

How many children have been neurologically damaged by toxic levels of manganese from the LTV/PolyMet site; or damaged by nickel (Dunka Mine), a carcinogen and a mutagen? What about autism; now linked to mercury, manganese, and nickel in air pollution? (2013 Harvard University Study). How many newborns have lost IQ points proportional to the amount of mercury above “safe” levels in their blood? How does this affect their success in school? When these children reach adulthood how many jobs are denied them as a result? What is the cost for the loss of possibilities in a life?

What is the cost of a life?

Will we speak? Or will we be silent? Silence is complicity.

Minnesota and mining: Our children, our waters and wild rice are political pawns