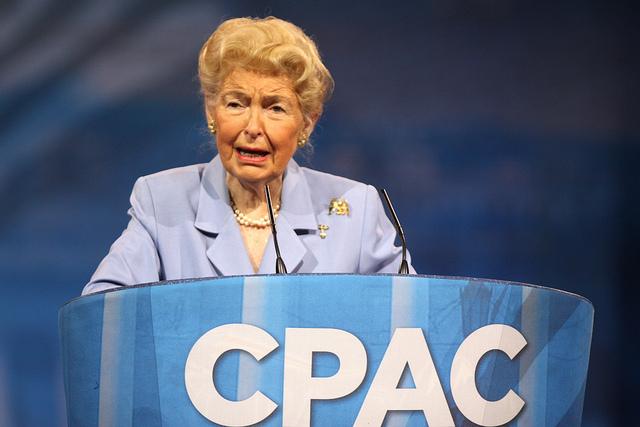 In the late 1970s, when I was still a girl watching Mary Tyler Moore forge an unmarried career in Minneapolis television, Phyllis Schlafly was fighting to ensure the Equal Rights Amendment (ERA) never became a part of the U.S. constitution. “Thanks” in large part to her efforts, the amendment died in 1982, having gained ratification in 35 of the 38 states necessary for constitutional inclusion.

More than 30 years later, the nearly 90-year-old Schlafly is still wielding fighting words in her battle against things she deems liberal and destructive to America.

Her latest target is equal pay for women. I guess it’s not enough for her that the Republicans in the U.S. Senate blocked the Paycheck Fairness Act. Schlafly, who used to thank her husband for allowing her to vacate her wifely duties so she could travel the country denouncing the ERA and telling her followers to wear the right lipstick and earrings so they wouldn’t look like feminists or the political activists they actually were, now says women who earn as much as men won’t get husbands. In an opinion for the Christian Post, she wrote that “suppose the pay gap between men and women were magically eliminated. If that happened, simple arithmetic suggests that half of women would be unable to find what they regard as a suitable mate.”

I don’t know if Schlafly gets out much these days (and since she is a widow, she doesn’t need permission anymore), but I’m guessing she’s not made much contact with the women who have managed to punch through discriminatory blocks so that they might do dirty, dangerous, outside work where many of them still don’t make as much as their male colleagues. And I didn’t know all of the men making so much more money were doing dirty, dangerous, outside work. Did you? I wonder if the 95.4 percent of the Fortune 500 and 1000 CEOs who are men, men who earned a median total compensation of $9.7 million in 2012, thought it was more important to have a clean, air-conditioned office rather than venture into dirty, dangerous, outside work?

The thing is, in 2011 (according to the Face the Facts project of the George Washington University), 28 percent of wives in two-earner U.S. households made more than their husbands. That figure increased 65 percent between 1987 and 2011. Have any of you heard of mass divorce filings by the husbands of such women, based solely on the fact that their wives make more money? No, you have not.

What people like Schlafly don’t want to realize is that there are a great many reasons why some women don’t marry. I’ll say that instead of “find husbands,” because, to be honest, if getting married is an overwhelming priority for a woman, she will, believe me, “find” some sort of husband. Sites like Match.com don’t exist just to provide opportunities for sexual escapades. Now, whether the husband such a woman marries is a decent guy who may or may not make more than she does is another matter rather overlooked by Schlafly and her acolytes.

The reasons are legion

As a never-married straight woman, I can tell you about at least a few of the reasons many women never marry. Some are as you’ve seen in movies, that we’ve never found the right guy. Some of that is because we were looking in the wrong places. Or we wanted Captain Perfection (but not necessarily Captain Makes-More-Money-Than-I-Do; certainly not in these days of the Lingering Great Recession) and we didn’t realize until later that he doesn’t exist. Some of us were focused on careers, careers our mothers didn’t dare dream of, careers that sometimes paid us more than our male colleagues but sometimes did not.

I don’t know if Schlafly would want to know that one (quite successful) man I’ve known for a while told me if my book ever becomes a big success, maybe is made into a movie, and I make lots more than he does, he would be thrilled to let me support him while he goes fishing and smokes cigarillos. He also said he would be happy (enough) to vacuum and cook, because I told him that for as charming as he is, fishing and cigarillos alone won’t cut it.

Ladies, whether you are single or married, it’s OK to make more than the men you are married to and/or like. Some of them might even thank you for your earnings ability.

And if they vacuum and like watching Mary Tyler Moore reruns, so much the better.

From nixing ERA to opposing equal pay, Phyllis Schlafly’s still at it