My beloved mother, the late state Sen. Nancy Brataas, IR-Rochester, died last week at age 86. She was a woman for whom the most meaningful unit of existence was, perhaps, the campaign. Living a life of campaigns, both political and personal, Mom was the first woman in Minnesota to seek the office of senator of her own accord — as opposed to filling the seat of a deceased husband — and to win, serving from 1975 to 1992.

Her campaign-centric worldview was forged over decades of hard-fought and hard-won sparrings. Yes, there was always blood on the floor, but at least there was enough to go around; no one went hungry. That seemed to me, as a young child living in a politically evolving household, the most curious part: that the most stalwart combatants stuck together, whatever the outcome. The goriest battles engendered the deepest, strongest friendships.

My mom died peacefully in wonderful, embracing hospice care, after 15 years of humoring chronic lung disease. She was grateful for every minute of what she regarded as a windfall of fluttering, fresh days. In a jolly medical check up April 7, she laughed and impishly implored her Mayo Clinic physician: “Why haven’t I died yet?” Then she asked to view her lung X-rays taken over the years. She watched in wonder, as if they were family vacations of her lungs’ carefree, bright childhood days — except they grew smaller, not bigger. At times like this, I wondered if death would work for Mom. Was it possible that she might actually kill death? Death didn’t seem up to her — not enough imagination.

Tools and a truck

Death did finally make it, but only after she was hugely energized for one day by the prospect of remodeling her hospice room, noting archly in a fit of hyper-lucidity: “I feel like I’m in a Motel 6.” In truth, the room had a perfectly lovely, Scandinavian-spare, clean and bright aesthetic. But Mom is a quatorze person — as in Louis XIV.

I was trying to find a way to gently explain that this was a transitional space, a conduit from the decorated Hither to the Neutral Yon, but she advanced the plot on me. She asked me to call a friend who had a truck and directed us to drive to her apartment, dismantle her personal hospital bed, haul it to hospice, and reassemble it in her room. We were to accessorize it, too, by bringing back the headboard, the bedclothes, the electrical squid of controlling cables, boxes, dials and cords. Oh, and the artwork on the wall — get it.

In the family dialect of my childhood, this type of request was known as “A Classic Mom.” This is how I introduced it when I called Dennis, who has been Mom’s friend-with-tools-and-a-truck for 45 years. Dennis was expecting the call to announce her death. Instead, he heard me say:

“We have A Classic Mom to do.”

“We are going to go to her apartment and bring her hospital bed to the hospice, after we disassemble it. Then we will reassemble it in her room.”

“I should tell you that I would prefer a starter model — non-electric, for one thing — to debut my bed-assembly skills. Something like an Ikea snap-together job that you put together with an Allen wrench while walking the dog. Vastly prefer it.”

“OK. Talk to you tomorrow.”

Dennis and I expected to end the day by vivifying the room with a resplendent blaze of Louis and building a better bed. Perhaps that was all Mom needed in death, as in life: to know that we were willing. We would work with her. Her vision would and could come to be.

No pain, no gain

She never recovered the energy needed to pursue the makeover. Instead, she rested the following day, April 16, whispering her last word as a question: “Unconventional?”

Yes, I assured her — and thanked her over and over. You were unconventional, and blessedly so, Mom. It prepared me for a life of exhilarating possibility. I wouldn’t wish it any other way. Nothing is too difficult, all things are possible, wonder abounds. Whatever ridiculous thing has just been proposed — with a spritzing of imagination, soupçon of resourcefulness, a few friends with tools, trucks, talents and good hearts — will work. We’ll get it done right and well, on time. That’s my mother. My mother’s unconventionality is the reason I still so much value the advice given me years ago in graduate school by my sage advisor: “Say yes to everything as long as it doesn’t hurt you or other people.” That attitude opens a lot of options. 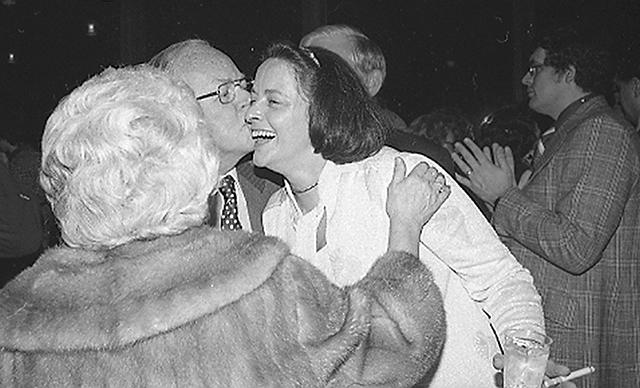 Courtesy of the Rochester Post-Bulletin
Brataas is congratulated after her 1975 election to the state Senate.

Many of those who knew Mom felt — and appreciated — her unconventionality.

They understood her sense that life requires strenuous engagement with the world — be it with friend, foe, idea, problem, colleague, deadline, institution, pantyhose or U.S. Post Office trying to close before mailing something way past deadline.

As a child, this was presented to me as axiomatic. It led me at times to understand my mother as a form of exercise. If I didn’t break a sweat in my exertions with my mother, I wasn’t trying. No pain no gain. Her tenacity always called for another round of discussion, another piece of data to consider. Strenuous engagement was the default mode of interaction; it is the price of an original mind. Expect resistance to the thing never before thought or proposed; practice push back. Gracefully — or not. Deep, authentic, engagement is the thing.

“Your mother was an amazing woman and a true friend: Difficult, brilliant, talented, organized. So detailed! I’ll miss her dearly.”

I laugh at this frequent comment, knowing I am among true kindreds when they recall my mother as both difficult and dear in the same breath — and still they mourn the loss of the whole fractious package. It’s the word order that contains the wisdom of a lifetime. It acknowledges that difficulty is indeed a part of the process of achievement and finding one’s purpose. In this age of facile affirmations, awash in thumbs-up over-connected friending and fanning, we lose sight of the gifts of grit — particularly in women and girls. Mom was a big believer in therapeutic grit: that which prompts growth, deepens and infuses life with meaning. So yes, difficult fits. Dear, too.

Seek opportunity. My mother’s career in politics started with the smallest opportunity when she was a young housewife with two toddlers. It was a casual request to help register voters, something that could be done an hour or two at a time. She said yes — and continued to say yes and show up. When opportunity knocked, Mom high-fived it back.

Rise to occasions. From her unsuccessful bid for lieutenant governor to contemplating a bid for U.S. Congress, to attending her grandson’s 4th birthday party just shortly after her lung cancer surgery, Mom not only gamely showed up and rose to every occasion, she committed 100 percent to a project. In the case of the birthday party, despite the suffocating July heat that makes breathing difficult under normal circumstances — she went on a birthday party field trip to Como Park, picked her horse, threw a leg over and rode the carousel.

Live imaginatively, believe ferociously. Beyond politics, Mom was known for her love of gardens — and her unconventional practices there, too. Often she obtained riotous and thriving results of things that weren’t supposed to grow where she put them. She especially loved our misplaced bog dweller, the tamarack tree, in our back woods. Mom could mobilize. Like the thousands of people she engaged in campaigns, the tamarack came to believe in Mom. It persisted because she believed it could, soil pH be damned.

Educate yourself first, then others. Mom was intensely and studiously interested in nearly every subject. She relaxed by listening to professional recordings by university professors, or watching didactically inclined movies and channels. Though art and history were staple subjects, in her later years she developed an intense interest in technology. She lamented that she did not have more time to master the iPad, her iPhone or be more adept on her computers — yes, plural.

Teach youth. Mom believed we all have in our souls the teaching impulse — “unrequited teach,” I’ve heard it called. It’s not a formal call to be a licensed career teacher or professor, of course. It’s a call to present important information in a careful, purposeful and structured way; to practice it so that it transforms into knowledge, insight and a powerful understanding — because understanding gives people choices in the world. Her grandchildren remember her earliest teaching efforts as her offering “Grandma Grammar Awards.” She encouraged them to attain verbal mastery of say, the subjunctive case, with incentives of award points redeemed for Lego sets.

Her last teaching adventure with her family was The Family History Project. It was an immersion into digitizing 60 bankers’ boxes of files and images, as well as recording and videotaping with her grandsons many of the stories these files hold. This ongoing project can be seen, in part, at her web site. A digital book for iPad is still in production.

Mentor. Mom truly did believe in the Gospel of Help. She believed she was here to help — and so are you, and that we all can.

Appreciate. One of my mother’s most frequent requests of me in her later years was to help her send thank-you notes, by hand or email, because she believed in the power of appreciation. It was one of her most conspicuous, and longest-running campaigns: to make appreciation the way of the world — appreciating everything: beauty, curiosity, civic life and responsibility, winning, losing, trying. What may be her last thank-you note was hand-written on a notepad on her dining room table, thanking a friend for introducing her to a “new friend.” The note says: “I’m so excited to learn more about my new friend Siri and this amazing technology. I think she’ll be a wonderful friend for me because typing is so hard. Thank you, Siri!”

Unconventional? Absolutely, and blessed be.