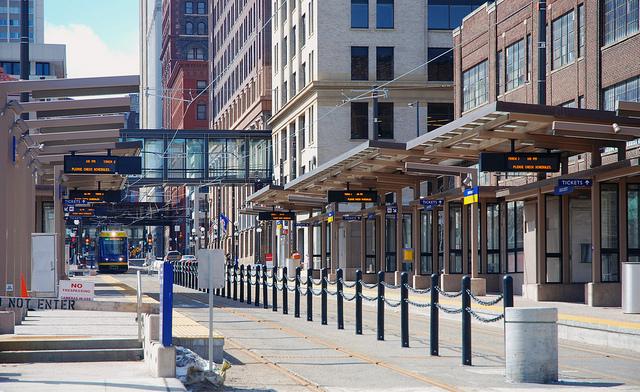 Courtesy of Metro Transit
Equity-focused transit would work within the city to improve connections between urban communities, then move outward to connect with suburban areas.

The Southwest Light Rail Transit project is frequently touted as one that will make significant improvements to racial and economic equity. I would argue that it does nothing of the sort.

If the SWLRT were actually an equitable transit project, what would it look like?

It would begin with the consideration of urban density and congestion, addressing existing transportation needs by creating alignments where ridership would be strongest. It would also create equity-oriented revitalization and development opportunities in economically challenged communities, front and center.

Rather than planning from the suburbs into the city — as in the case of SWLRT, in search of the quickest path in and out — equity-focused transit would work within the city to improve connections between urban communities, then move outward to connect with suburban areas.

This strategy would capitalize on the robust businesses already existing in the city for better access by transit for city residents. As the population growth now is shifting into the city, this becomes more urgent. Buses, bikes, walking and trains would all be integrated elements of this system. As transit links improved between urban communities, transit out to the suburbs, where residents already have access to high-quality commuter buses, would be further developed between suburbs and into the city. Reverse commuting would, again, focus on need — to address mismatches between communities. But emphasis would remain on developing local urban economic strengths.

Planning from the perspective of greatest need, from the beginning, would ensure the greatest needs and greatest opportunities for ridership would be served!

This approach to transit would meet two objectives of the Brookings Institution’s Mind the Gap study. The study identified patterns contributing to economic and racial disparities of location — that is, critical disparities between the core cities of Minneapolis/St. Paul and the suburbs and exurbs. These patterns, the study suggested, limit the region’s future business competitiveness.

One pattern noted in the study was the economic disparity between more affluent suburban and depressed urban communities. Another was the growth of exurban communities. Equity-based transit would address both these concerns.

First, equity-based transit would reduce the isolation of economically disadvantaged communities within the city by improving transit links between neighborhoods, making them more competitive for economic and job development. Second, equity-based transit reduces the expansion of development in exurban areas that place an undue cost burden on the region for additional infrastructure used to connect suburban and growing exurban communities.

Equity-based transit is not an afterthought to justify exurban transit projects. Those transit projects continue the expansion and separation of the suburbs and exurbs from the city and are planned for suburban economic development, not urban development. Equity does not come by building any train; it comes with intentional, thoughtful planning that considers reducing disparities front and center.

Racial and economic equity had little to do with the selection of the Southwest Light Rail alignment. Persistent disparities and real urban-transportation needs should have been at the center of the SWLRT conversation early in the development phase, but they were not. Van White station, touted as serving low-income households, is surrounded by the neighborhoods of Bryn Mawr, Kenwood, Lowry Hill, Harrison and Heritage Park. The closest residents to the station are from Lowry Hill, an affluent neighborhood, not Harrison, where the household income hovers around the poverty line.

The ridership for Van White, according to the Metropolitan Council, will be fewer than 400 single trips by 2030, fewer than 200 round trips 10 years after the line opens!  Combined ridership from Van White and Royalston, the other station sold to us as serving equity, will total fewer riders than just one of the many suburban stations. The Met Council describes the Royalston station as serving residential communities “located away from the station.” The development hoped for Van White has been classified as tier 3, least important for grants, because it isn’t shovel-ready. Ryan construction is busy with their other project by the Vikings’ stadium, so the highly problematic Bassett Creek River Valley must wait. From the beginning, the project’s equitability, economic, social and environmental impacts were truly given only minimal consideration under federal criteria.

The Southwest Light Rail alignment, in fact, was developed under the “Cost Effectiveness Rating” criteria set forth by the George W. Bush administration. Foremost in those criteria was to provide time-saving one-seat rides to people living in suburbs and exurbs. Urban communities and environmental impacts were given equal weight in routing only after President Barack Obama took office and the alignment had already been selected.

As a result, SWLRT is suburban-centric as described above, avoids urban density and economically stressed communities. It will do what it was designed to do: promote suburban development and enter and exit the city quickly. It is not an equity train.

But shouldn’t we just cut our losses and be happy for any train? After all, it skirts a northside community, the feds will pay for half of it, and it will link to other lines. It’s the system, it is said, that really matters. But what system are SWLRT proponents really referring to? The transit system isn’t just trains, it consists of buses and trails within the city as well. How does the SWLRT alignment impact those systems? And, once completed, will it add a proportional benefit to its cost for both privileged suburban communities and persistently underserved urban communities? The answer is “No.”

It’s “No” because, like the Southwest Light Rail alignment, persistent disparities are not considered at the center of the current transit system as a whole. For example, Nicollet Avenue currently has only one bus serving that busy area and lacks connections east and west until a rider reaches Lake Street. Adding a very expensive fixed train line that maintains a pattern of exclusion and does not address pressing urban transportation needs does not benefit our region in changing this growing disparity. In the Brookings study, Mind the Gap, the patterns contributing to economic disparity of location will be entrenched by the SWLRT alignment, not alleviated. Development patterns that locate jobs and facilitate living out of the city will be benefited — contributing to, not reducing, economic opportunity gaps between suburban and urban communities. Ridership numbers also show relatively few urban residents will actually be connected to job opportunities.

Much more could be done with a smarter, equity-based use of 1.5 billion transit dollars. Also, as this train requires over $20 of million in operating costs, city bus services might be reduced as a cost savings — as occurred in Portland. Why pay for a bus in Bryn Mawr to downtown when there is a train six blocks away and down a flight of stairs?

Southwest Light Rail will not be a “game changer” for historically underserved communities; it will be a “game win” for the same team that always wins.

Julie Sabo is a member of LRT Done Right, a grassroots community group advocating for thoughtful transit solutions to address local and regional transportation needs.  She is also a former senator in the Minnesota Legislature, where she served on the Transportation Committee.

Southwest Light Rail: It is not an equity train