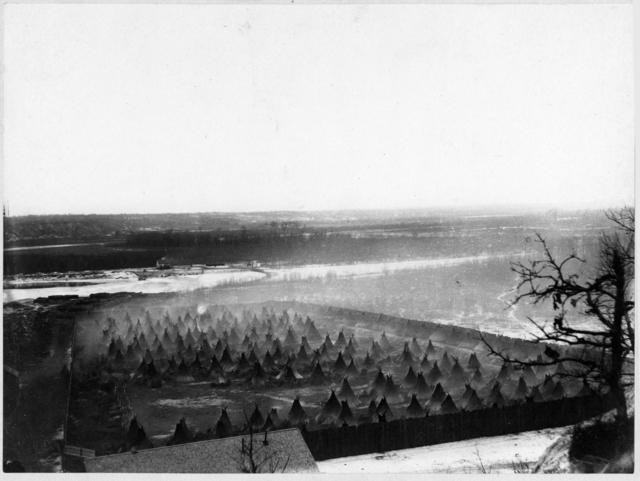 Courtesy of the Minnesota Historical Society
There were internment camps at Fort Snelling that had devastating impacts on Dakota people both mentally and physically.

On April 27, the Minneapolis City Council approved a resolution to rename Columbus Day as Indigenous People’s Day. While this is a step toward correcting the collective memory of the past, more steps are needed to reconcile Minnesotans with indigenous peoples.

As three University of Minnesota honors students, we were taking a class on atrocities and attempts at reconciliation. Our final project was to research a process of reconciliation within the Twin Cities. We all knew the cursory details of U.S. interactions with indigenous peoples, such as the first Thanksgiving and the Trail of Tears, but very few specifies about interactions with Minnesota’s indigenous people.

Growing up in Minnesota, we studied Minnesota history and visited Fort Snelling. However, until we were in college, we did not learn about atrocities committed, specific events, and the current complex relationships between the state and indigenous peoples. This is problematic: For many Minnesotans, all the knowledge they will have of the events of the Dakota War will stop in middle school.

The research we did over the semester was a real eye-opener. We spoke with members of the Dakota community and the Minnesota Historical Society. Though not everyone had the same views, one thing was clear: More people need to know about the crimes against humanity that were committed in Minnesota. Members of the Dakota community should lead this educational process, but it should have the broad and unwavering support of the majority community.

Symbolic events, such as creating Indigenous People’s Day, are not sufficient by themselves but should be accompanied by educational initiatives. The white perspective has dominated the narrative of past events, including white settlers’ victimization and proclaiming of righteousness. But little attention is given to the Native American perspective that includes the victimization of the Dakota. Many atrocities were committed against the Dakota peoples — all to the advantage of white settlers in Minnesota. These are facts that are unfortunately forgotten by a majority of Minnesotans.

There were internment camps at Fort Snelling, for example, that had devastating impacts on Dakota people both mentally and physically. There is little reference to these facts at Fort Snelling itself, which continues to be a place of settler righteousness and American imperialism. This has to change.

In Mankato, the largest mass execution in American history took place when 38 Dakota people were hung under false pretenses. This fact gets little recognition in schools or by the state of Minnesota. We learned that as white Minnesotans, we are directly benefiting from the atrocities and land theft from the Dakota community. All white Minnesotans are benefiting by these crimes against humanity. It is necessary that we recognize these atrocities so that we may make up for them through a process of reconciliation.

In the past, the Minnesota Historical Society (MHS) promoted the white settlers’ perspective while whitewashing the brutal history of the atrocities committed. But in recent years MHS has been doing a better job of incorporating Dakota perspective in textbooks and exhibits. This is a good start, but more needs to be done. New textbooks with a Dakota perspective are needed, and more exhibits and monuments are needed, especially at Fort Snelling. Some changes are underway: Tribes have been working to publish more Dakota stories from the war as well as to create signage and memorials across Minnesota.

Our project has been an enlightening experience for us. Now that we know the brutal history of Minnesotans, we appreciate and respect indigenous history and peoples more. It is hard to say if reconciliation is possible between the groups, but all white Minnesotans should be obligated to learn the history better. This will have the result not only of combating the notion of settler righteousness but also of promoting solidarity between the communities and creating a dialogue of reconciliation.

We are optimistic that Indigenous People’s Day and greater education of the U.S.-indigenous relationship will result in more activity between tribes and non-native peoples.

Luke Wolf, Zeb Dawson and Nicola Brambilla are undergraduate honors students at the University of Minnesota — Brambilla and Dawson in political science, and Wolf in history.

Indigenous People’s Day: One small step on the path toward reconciliation