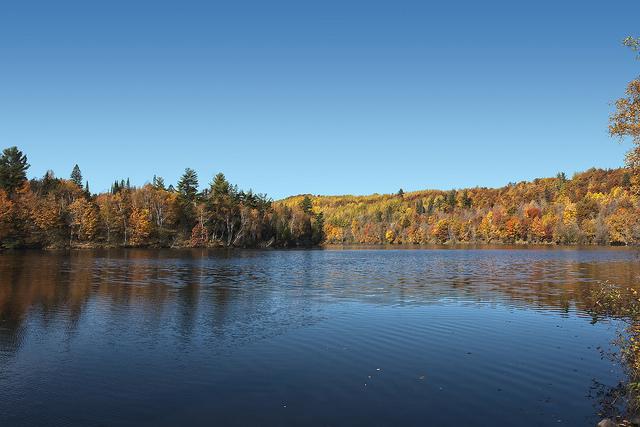 CC/Flickr/Randen Pederson
Minnesota needs to do a Mercury TMDL of the St. Louis River Watershed that includes not only accurate mass loadings of mercury from present-day and legacy sources of mercury, but also loadings of reactants controlling toxic methyl mercury production and bioaccumulation in fish, including sulfate and iron.

In spite of claims to the contrary, PolyMet’s proposed NorthMet project would add more mercury to the environment, increasing contamination of high-value Minnesota aquatic resources.

A year ago the Minnesota Pollution Control Agency (PCA) pulled out of a million-dollar study, a Mercury Total Maximum Daily Load (TMDL) of the St. Louis River — a study that would have identified and set limits on the sources of mercury released to its waters.

The reason given for the pullout: “Officials from the Minnesota Pollution Control Agency (PCA) said they are committed to reducing mercury pollution in the river and in the 10 percent of the state’s waters that have unusually high levels. But, they said, the agency’s lead scientists believe the state first needs more research on how mercury behaves in nature and why mercury levels in fish from the St. Louis River are significantly higher than in those elsewhere.”

And that certainly ought to make agency scientists hesitant to throw more bacterial-stimulating sulfates into waters whose sediments have high iron content, the site-specific argument being used to rationalize changing Minnesota’s current sulfate standard, set to protect wild rice.

Minnesota has a critical problem with damage to wild rice, despite the limited effect that iron has on toxic hydrogen sulfide (iron precipitates out as iron sulfide). What about the critical damage to our children from the neurotoxin methyl mercury? What about the 10 percent of newborns tested in the Lake Superior Basin of Minnesota found to have “unsafe” levels of mercury in their blood, likely because their mothers ate mercury-laden fish from area waters? Where is the standard to protect our children?

Scientists at the University of California, Davis, discovered that iron-reducing bacteria likely play a significant role in methylation of mercury, comparable to that played by sulfate-reducing bacteria.

The abstract of the 2006 UC Davis study, “Mercury Methylation from Unexpected Sources: Molybdate-Inhibited Freshwater Sediments and an Iron-Reducing Bacterium,” states: “Methylmercury has been thought to be produced predominantly by sulfate-reducing bacteria in anoxic sediments. Here we show that in circumneutral pH sediments (Clear Lake, CA) application of a specific inhibitor of sulfate-reducing bacteria at appropriate concentrations typically inhibited less than one-half of all anaerobic methylation of added divalent mercury. This suggests that one or more additional groups of microbes are active methylators in these sediments impacted by a nearby abandoned mercury mine. From Clear Lake sediments, we isolated the iron-reducing bacterium Geobacter sp. strain CLFeRB, which can methylate mercury at a rate comparable to Desulfobulbus propionicus strain 1pr3, a sulfate-reducing bacterium known to be an active methylator. This is the first time that an iron-reducing bacterium has been shown to methylate mercury at environmentally significant rates. We suggest that mercury methylation by iron-reducing bacteria represents a previously unidentified and potentially significant source of this environmental toxin in iron-rich freshwater sediments.” (Italics added)

Given the politics polluting the science in Minnesota, new research is vital before any standards are changed or new mining permits issued. Minnesota needs to do a Mercury TMDL of the St. Louis River Watershed that includes not only accurate mass loadings of mercury from present-day and legacy sources of mercury, but also loadings of reactants controlling toxic methyl mercury production and bioaccumulation in fish, including sulfate and iron.

The “Wild Rice Sulfate Standard Study” began its research projects in 2012. Even as the Minnesota Department of Natural Resources, Land and Minerals Division, research report file, “Sulfur and carbon controls on methyl mercury in St. Louis River Estuary sediment,” 2012, referenced not only the UC Davis study, but also, “Mercury Methylation by Dissimilatory Iron-Reducing Bacteria,” and, “Methylmercury production in a Chesapeake Bay Salt Marsh;” all three studies highlighted mercury methylation by iron-reducing bacteria. The Minnesota Chamber of Commerce insisted methylmercury could never be discussed during the Wild Rice Study. The PCA suddenly, without warning, pulled out of the St. Louis River Mercury TMDL in 2013. In 2014, Minnesotans have yet to hear any discussion about iron-reducing bacteria methylating mercury in our waters. Why not?

Set the politics aside and do the science. Protect Minnesota’s children from toxic mercury poisoning.