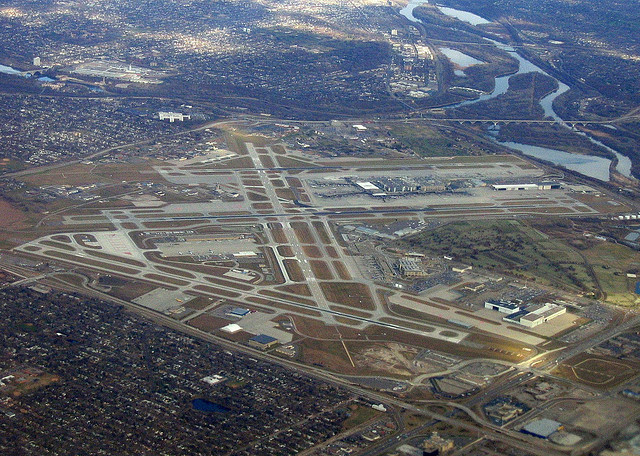 CC/Flickr/Ron Reiring
MSP consistently ranked in the past at or near the bottom of its 10 largest airports in quality of service to the disabled.

Minneapolis-St. Paul International Airport prides itself on its multibillion-dollar contributions to Minnesota’s economy, its self-sustaining revenues, its numerous awards for safety, management and customer service as well as its commitment to giving travelers “the best airport experience in North America.” But about 100 people who mounted a protest Monday at the airport, including 13 arrested for blocking an access road, say it falls far short of that goal when it comes to providing legally required services for the disabled. Even Delta Air Lines, which accounts for three of every four flights there, found in internal audits that MSP consistently ranked in the past at or near the bottom of its 10 largest airports in quality of service to the disabled.

Lately, said Patrick Hogan, spokesman for the Metropolitan Airports Commission, the government agency that runs MSP, it has improved to second or third in the audits. “But we’re as concerned as anybody about this,” he said. “Our board continues to struggle with the issue.”

Delta was forced to perform the audits under federal consent decrees it signed following allegations of repeated mistreatment of disabled passengers. The decrees, signed in 2003 and 2011, cost the airline $3.35 million in fines and remedial spending. Instead of improvement, however, Delta’s treatment for the disabled got worse, according to a new report from the Service Employees International Union Local 26.

The U.S. Department of Transportation “found a substantial number of ‘egregious violations’ … by Delta, such as leaving passengers unattended in a wheelchair for more than 30 minutes,” the report says. Federal authorities also “noted that the number of disability-related complaints filed against Delta had actually increased after the 2003 consent order,” from fewer than 3,000 in 2004 against Delta and Northwest Airlines combined to about 4,400 in 2012 against the merged carrier — despite a 7 percent decrease in total passenger levels.

Among Delta’s violations was causing passengers to miss flights due to failure to provide requested wheelchair services, leaving an 81-year-old man to sleep overnight in an airport after his flight was canceled and the nearly unbelievable case of a passenger forced to crawl across tarmac, up and down an airplane’s stairs and to and from his seat. Before he filed suit, Delta offered him a $100 voucher for his trouble.

Until 1986, none of this was illegal. That year, however, President Ronald Reagan, usually a vocal critic of government regulations, signed the Air Carrier Access Act to address the “unique difficulties faced by handicapped air travelers” and grant them wide protections from discrimination by the airlines.

“Yet, almost 40 years later, many of the problems still exist that the ACAA was intended to address,” according to the SEIU report.

The problems apparently span the industry, with at least 11 airlines besides Delta fined for ACAA violations in recent years, the Star Tribune has reported. But Delta’s $2 million penalty in 2011 was the largest ever assessed at that point. None of the worst examples of passenger maltreatment occurred at MSP, so it’s unclear why it was such a sore spot in the audits.

One explanation offered in the SEIU report is the federal minimum wage of $7.25 an hour paid to MSP wheelchair attendants and electric cart drivers by Air Serv, the company Delta contracts with for the service. Full-time work at that rate grosses barely $15,000, “well below the federal poverty line,” the report notes. Other airports are governed by higher state wage floors than Minnesota’s current sub-federal $6.15 an hour.

In addition, MSP’s disability service workers receive no paid vacations or sick leave. The low pay forces more than a third of those surveyed by the union to hold down a second job, leaving them stressed, tired and inclined to report for work even when sick. That “poses serious health risks” to disabled passengers who are elderly or have weakened immune systems, the report says. Such conditions also lead to high turnover and difficulty complying with federal rules requiring training of disability service workers.

The evidence points to at best half-hearted efforts by Delta to treat disabled passengers with the dignity the law requires. MSP janitors working for Air Serv’s parent company, American Building Maintenance, are paid nearly double the minimum wage, $14.27 an hour, plus vacation, holidays and sick days. And SEIU archly points out that Delta CEO Richard Anderson’s $14 million salary in 2013 calculates out to $2,232 an hour — even if he worked 16 hours a day every day of the year.

“We want to make sure people are well compensated for the work they do at the airport,” he said. But the airlines’ disabled service staff is strictly in the private sector and “it’s a competitive business,” he added. “I’m sure cost is one of the things they look at.”

Beginnings of a solution?

Minnesota’s impending increase in the state minimum wage to $8 an hour on August 1 may provide the beginnings of a solution. A year later it will rise to $9 and a year after that to $9.50. Those are not princely rates, but Hogan said the MAC cannot mandate higher pay at all the airport’s private businesses, including many small concessionaires.

Local 26 hopes to include Air Serv employees in its mission to organize many of America’s lowest paid workers. Meanwhile, it recommends that the MAC collaborate with the airlines, their subcontractors and local disability advocates to improve disability awareness training of employees, a step recently taken by San Francisco International Airport. The union also urges the MAC to enact living-wage-and-benefits policies for all airport workers. Delta, the union says, should do more to ensure adequate staffing of services for disabled passengers, along with better pay and benefits for the workers.

It might be argued that serving the disabled at our airports is “unskilled” labor deserving no more than a poverty wage. On the other hand, that seems like an insult to the dignity of both the workers and the physically vulnerable people they assist. We should do better than that.

Airports fall short in service to the disabled