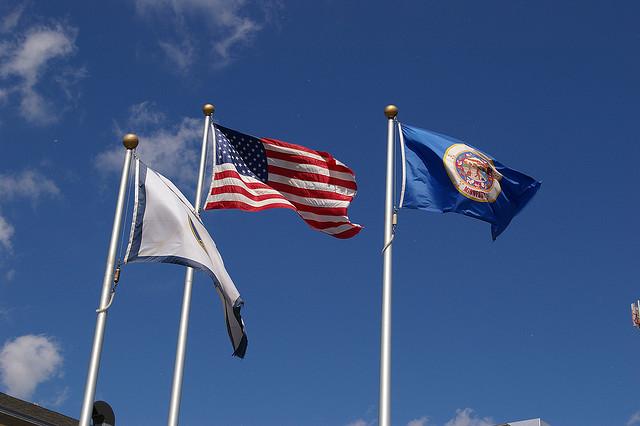 CC/Flickr/Library and Information Services Metropolitan State University
Minnesota is actually one of the nation’s most independent states when it comes to federal funding reliance.

While Pennsylvania is the home of America’s independence, Minnesota is actually one of the nation’s most independent states when it comes to federal funding reliance. Researchers at WalletHub.com, the social media research company, have taken a fresh look at states most and least dependent on the federal government and found Minnesota is the third least dependent. For starters, Minnesota gets back only 56 cents for every dollar sent to the federal government in taxes — the same as No. 2 Illinois. Only Delaware, with a 50-cent return on its federal investment, has less dependence in that category.

The return on taxpayer investment was one of three categories used to measure state dependency on the federal government.

Another measure found Minnesota gets 28.47 percent of its state revenue from federal funds, ranking 12th among least federally dependent states; and it is the eighth least dependent in the number of federal employees per capita (5.91 percent of the state workforce).

John Kiernan, senior writer and editor of Evolution Finance who wrote the report for WalletHub, acknowledged that the disparities reflect profound economic and political differences among the states.

Nonetheless, political spin will cast the findings in different light and that will certainly be true in this, another election year for congressional and state offices.

“What if, for example, a particular state can afford not to tax its residents at high rates because it’s receiving disproportionately more funding from the federal government than states with apparently oppressive tax codes?” Kiernan offered. “That would change the narrative significantly, revealing federal dependence where bold, efficient stewardship was once thought to preside.”

The issue of spin

Writing about Kiernan’s findings on another personal finance media site, Eric McWhinnie goes right to issues of political spin by pointing out the apparent hypocrisy of so-called red states opposing the federal government and its programs that help them keep local taxes lower than those in the blue, or progressive states.

“Red states are known for imposing lower taxes than blue states, but it appears they are able to do so because they are more dependent on federal funding,” McWhinnie wrote.

Under the three weighted metrics used in the report, Mississippi and New Mexico tied as the most federally dependent states, followed by Alabama, Louisiana, Maine, Montana, Tennessee, West Virginia, South Dakota and Arizona.

What might surprise some readers, Michigan ranks 12th as least dependent on the federal government. Iowa, meanwhile, tied with New York and the District of Columbia as 17th least dependent, Wisconsin was 20th and energy rich North Dakota ranked 29th.

In one of the first such studies 40 years ago, Scripps Howard Washington correspondent Carl West and I, for what was then Ridder Publications newspapers, collaborated on research that looked at which members of Congress were “bringing home the bacon” for constituents. The same disparities between progressive and regressive states were apparent then.

We asked the late Sen. Hubert Humphrey why there seemed to be a consistency between federal dependence and dislike of government while states such as Minnesota, Massachusetts and California — then on the other end of the scale — were more pro government.

Humphrey used a whimsical agrarian metaphor about a watering tank to explain what might be red state reasoning. If you are bent over and that deep into the (federal) “trough,” he said, you don’t want any more weight on your shoulders. As for what we now call blue states, he said, “We just want the federal government to be a better partner.”

The WalletHub study shows we should still seek a better partner in the federal government.

Minnesota ranks second lowest in government contracts received compared with federal taxes received, which can partly be explained by our lack of major defense contractors based in the state. Becoming more cutting edge on so-called “green” technology and manufacturing of other advanced technology products would strengthen our return on those tax dollars.

We also rank just third among states for federal grants received per tax dollars paid in. Just what these grants are for would reflect what we might be missing, but it has been a concern in Minnesota for more than a decade that we aren’t landing the research grants we would desire.

Minnesota doesn’t have huge military bases, doesn’t have large defense contractors, and, fortunately, it doesn’t have the systemic poverty that make some states huge recipients of federal “safety net” fund transfers. All this influences whether we are a net payer or a net receiver in our relations with the federal government.

In many ways, Minnesotans should be pleased we are a net payer. Equally important, colleague Jeff Van Wychen recently pointed out we are making progress against other states in state tax fairness and it isn’t by having the federal government pick up the tab for local services.

Thomas Garrett, from the University of Mississippi, commented on the WalletHub site that the disparity among states paying to and receiving from the federal government is likely to grow. In the 1950s, he said, health and welfare payments represented about 30 percent of the federal budget. Now it is 65 percent.

The big difference isn’t the direction of the tax flow, or who is subsidizing whom. It is poverty.