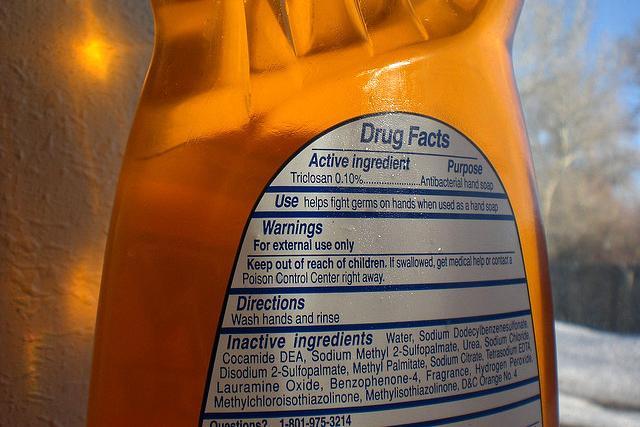 CC/Flickr/ Jack Black’s Stunt Double
By 2017 Minnesota’s new law will eliminate most of the triclosan that ends up in Minnesota waters.

Although many people have never heard of triclosan, most of us have it in our bodies. Triclosan is an antimicrobial chemical that was added to consumer products, including soaps and toothpaste, several decades ago and marketed as a benefit for users because it could kill bacteria. It was a successful advertising tool, and has been used by so many personal-care-product companies that for a time, it was difficult to find a liquid hand soap that did not contain triclosan.

However, researchers have found that our bodies absorb this chemical. It shows up even in the breast milk of nursing mothers. Triclosan and its derivatives have also been found downstream from wastewater treatment plants.

Like many other chemical additives to consumer products, triclosan’s widespread use occurred despite the lack of evidence that it is beneficial to consumers’ health, and despite growing concerns about possible risks to health and the environment.

Fortunately, the Minnesota Legislature recently passed the nation’s first statewide ban on the use of triclosan in consumer soaps. Because of lobbying by the industry, we were able to pass the legislation only by delaying its implementation until 2017, but the new law will eliminate most of the triclosan that ends up in Minnesota waters. In addition, although the law has no legal impact elsewhere, it may help increase public pressure on the industry, speeding up the elimination of triclosan nationally.

Environmental concerns about triclosan have grown after pioneering research by professor Bill Arnold at the University of Minnesota documented that triclosan in wastewater breaks down into some forms of dioxin. We don’t yet know the extent of risk from triclosan-derived dioxins, but we should certainly be concerned about their impact on aquatic ecosystems.

Health risks from triclosan are an equally important concern. The impact of exposure to triclosan on our skin (from soap and body wash) and in our mouths (from toothpaste and mouthwash) is not fully understood, but triclosan has been shown to interfere with hormone functioning in lab animals. As a result, scientists recognize that it may also affect human liver, blood, and reproductive systems.

Yet another concern: antimicrobial-resistant bacteria

There are also concerns that triclosan may add to the growing problem of antimicrobial-resistant bacteria. This is a significant public health problem of its own, as doctors and hospitals increasingly struggle against infections that don’t respond to antibiotics.

Former Minnesota state epidemiologist Dr. Michael Osterholm has said that soaps containing triclosan give no more protection against infectious disease than use of regular soap. Because the benefit of triclosan is minimal or nonexistent, and the harm or risks resulting from its use are significant, it is wise to heed the recommendations of medical professionals and the Minnesota Department of Health, to stop using triclosan.

Pressure to phase out triclosan’s use

Minnesota’s leadership adds to the growing pressure on manufacturers of personal care products to phase out triclosan. While triclosan was once used as a marketing ploy to make consumers believe they were buying a superior product, we are reaching the point where triclosan is becoming a liability to product marketing. One major toothpaste company still adds triclosan, but its competitors do not, and many now advertise that their toothpastes are “triclosan free.”

The real impact of this legislation will likely occur long before the ban takes effect in 2017, by encouraging other states to adopt similar bans and by increasing pressure on the industry to stop using triclosan. Consequently, this legislation might help bring about the elimination of triclosan from personal care products — nationwide — even before the Minnesota ban formally takes effect.

Minnesota ban on triclosan may have broader impact