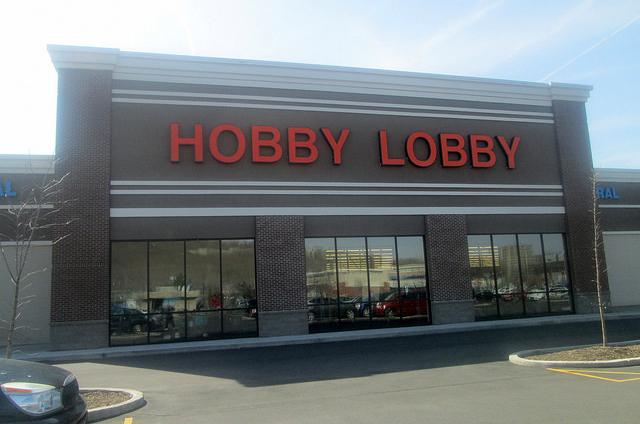 CC/Flickr/Random Retail
I bet a good proportion of the 13,000 individuals employed by Hobby Lobby have health care needs related to contraception.

Spoiler alert: They ruled in favor of Hobby Lobby, in a 5-to-4 decision.

Hobby Lobby is a for-profit arts and crafts store chain that employs more than 13,000 individuals. It sued the government for infringement of its right to exercise religious freedom under the Religious Freedom Restoration Act. The company brought suit in order to limit the contraceptive coverage made available on the insurance plan it provides employees. Hobby Lobby did this even though a majority of Americans believe employers shouldn’t be able to opt out of the contraceptive coverage mandate.

Under the ACA the government set forth a set of health insurance coverage requirements for basic health care services — which includes a full range of FDA approved birth control methods. Access to contraception is one of the most basic sets of health care, in fact. Several national polls report that nearly 99% of all women use some kind of birth control method, at some point in their lives.

Now, to be clear, Hobby Lobby was not objecting to providing insurance that would cover contraceptives in general — only a choice few that its leaders believe fall outside of their definition of contraception. This point — of cherry-picking contraceptive options approved by the FDA — is disturbing, and terrible public health policy. The methods they object to happen to include extremely effective, long-term methods that have grown in popularity and accessibility over the past few years. Long Acting Reversible Contraceptives — intrauterine devices and implants — are effective anywhere from 3-12 years and are changing the face of reproductive health and family planning because they remove from the equation two of the most common birth control barriers — user error and cost. When covered by health insurance, these methods are likely to be one of the single most effective and economical points of health care for women of reproductive age.

And we as a nation are in desperate need of effective, long-lasting contraception. Why?  The United States has one of the highest rates of unintended pregnancy among developed nations. Just how high is it?  Nearly 50 percent. Half of all pregnancies in the United States are unintended. That’s one out of every two pregnancies. And if you are a low-income woman, your rate of unintended pregnancy is five times higher than that of a woman at the upper end of the income spectrum.

When we compare our teen birthrate to others, we fare even worse. According to the United Nations demographic yearbook, our teen birthrate is higher than the rate in the United Kingdom, Ireland, Israel, Canada, Germany, France, Norway, Italy, Sweden, Denmark, the Netherlands and Switzerland. We are tied with Romania, and Bulgaria leads by a hair. What is clear to me in today’s ruling is that our nation continues its collective failure to support women, particularly low-income women, to have true access to the tools to plan their families and ultimately their futures.

The ACA has made incredible leaps in addressing some of the major barriers by making health insurance more accessible and ensuring that coverage meets basic public health standards –like covering FDA-approved birth control. In fact, bipartisan efforts at the federal and state levels have worked for decades to make contraception more accessible. For roughly 37 million women a year the most ubiquitous health care need is contraception. And I bet a good proportion of the 13,000 individuals employed by Hobby Lobby fit this profile. Ensuring birth control is included as part of a basic set of covered health benefits makes social, economic and pragmatic sense.

Contraception is a basic health care need that will span just about 30 years of a person’s life (the average span of a woman’s potential reproductive years). It might be hard to imagine a 27-year-old woman working three low-wage jobs to come up with $25 extra dollars a month to buy a pack of birth-control pills. It may be hard to relate to the 35-year-old mother of three whose husband’s employer is cherry-picking health coverage, which means she can’t get her birth-control injection this month. It might be hard to think about having to choose between groceries or birth control today. Except that it isn’t. Thirty-seven million people a year need access to contraception. Half of us have been or will be pregnant as a result of such difficult choices, and the other half of us know someone who has had to make that choice.

We are failing to meet an extremely basic health need for millions of women and their families across our country. It’s time to stop allowing the issues to get co-opted and start demanding our lives, our families, and our futures are recognized.

Alissa Light is the executive director of Family Tree Clinic in St. Paul.