According to the Annie E. Casey Foundation’s study, “Race for Results: Building a Path to Opportunity for All Children,” Latino children are not being served well by most states in the United States.

“The index is based on 12 indicators that measure a child’s success in each stage of life, from birth to adulthood,” the report says. “The indicators were chosen based on the goal that all children should grow up in economically successful families, live in supportive communities and meet developmental, health and educational milestones.”

According to this study, most states in the whole nation are failing Latino children. Only 8 states reached a score of 500 or more, with Alaska topping the list at only 573.

Alabama is definitely the worst state in the nation for Latino children, with a score of 331 (surely those anti-immigrant policies are not helping either; ME, VT, WE were not ranked for Latino children). This is a 242 difference, with all states falling at the lower spectrum in the scoring. “The range of index scores for Latino children — 331 to 573 — is the narrowest of all racial groups,” the study also notes. Moreover, for every measure, Latino children fall behind the national average (page 9 in report).

Our children face all kinds of obstacles to opportunity and success. “Most vulnerable are the 5.5 million children who reside with at least one unauthorized immigrant parent” that could tremendously be helped by some sort of federal immigration reform.

Other children are not fairing well either. Native American and African-American children, at the national level, are below 500 index points according to this research. Here is a graph showing how kids are doing nationally by race/ethnicity: 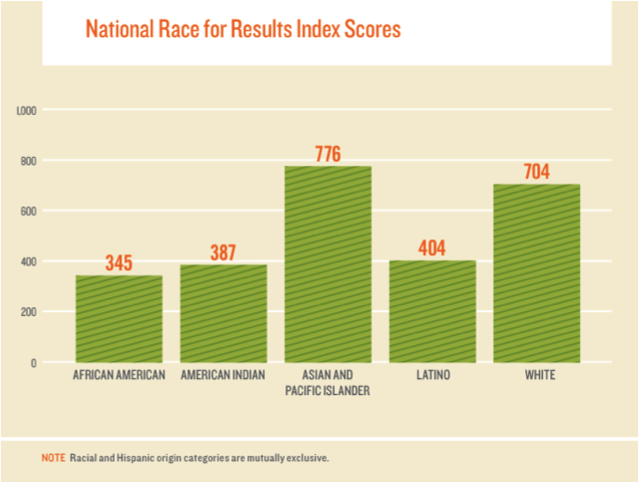 Minnesota, which prides itself for having a great education system, is lagging with most children of color. Though, as pointed out in the graph above, national index points for most states for students of color are at the low spectrum. Here is a graph showing state and national scores for Minnesota for each racial/ethnic group: 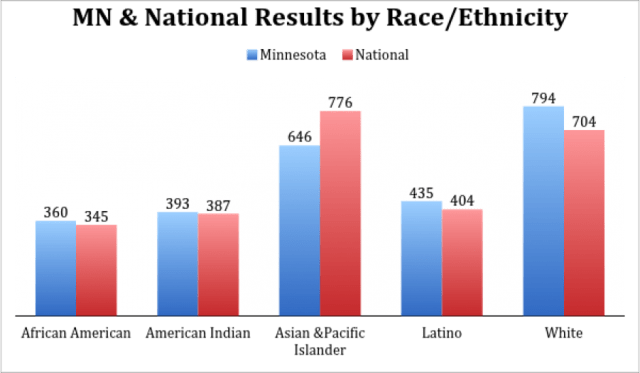 This is too dangerous of a track record for our nation and individual states. Often people cite the fact that people of color will soon be the majority in the US in terms of population. The Latino population will grow from 24 percent in 2012 to 29 percent in 2030. According to this data, nationally many children are “meeting milestones associated with success,” but many are not — and the bulk that are not are from families in communities of color and immigrant communities. In order for our nation to be prosperous, the achievement of all communities must be equitable; we all should share the great wealth in the United States.

You can check out the report here; it includes more recommendations to change this national trend.

Juventino Meza is a founding member of NAVIGATEMN. He is the recipient of the Ohtli Award, the Mexican government’s highest recognition for a civilian Mexican living outside Mexico, and recipient of the Immigrant of Distinction Award from the Minnesota/Dakotas Chapter of the American Immigration Lawyers Association.