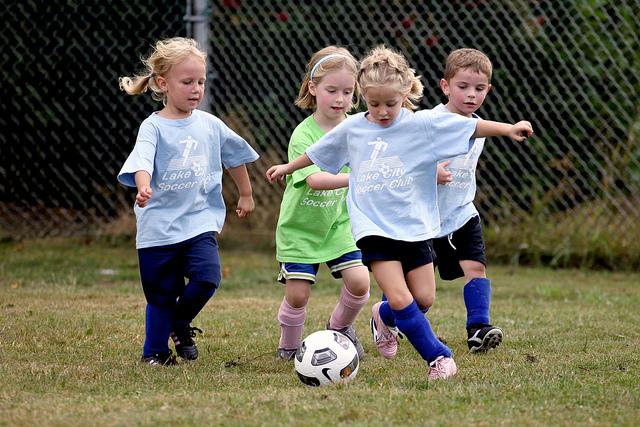 CC/Flickr/clappstar
“Girls as energetic, eager and able as the boys, having a blast — but rarely over age 10.”

An ad I saw recently showed how girls’ confidence plummets after age 10. It felt like a punch in the gut.

I had just been discussing with a colleague how feminists seem to be failing girls. Admittedly edgy, my thesis is that we women haven’t sufficiently personalized “the political.”

My colleague graduated high school within days of passage of the Civil Rights Act of 1964, just after I was born. She’d grown up with the movement, becoming part of it. All the connections contextualized my point.

“First, thank you for your hard work as a feminist. It’s difficult to complain about people like you whose efforts gave women like me so much.”  She looked perplexed. “But it’s just so frustrating.

“Because of Title IX I played on the boys’ soccer team at my high school.

“Because of confidence sports gives, when my family’s construction company where I worked in my 20s didn’t change its inequitable policies, I left.

“Because that emboldened me, I went to an entirely different type of company: a tech start-up, and later left it to cofound another tech company.

“Because equality worked, I tried to uphold the principles, including at my company.

“Because self-actualization seemed possible, after my company was established I worked from home where I could be a more present parent. First in journalism and then civic engagement, where a male colleague urged me to study feminism. He’d stayed at home with the children while his wife earned her PhD.”

My colleague and I recalled that the man who connected us had invited me to co-author research on opposite-sex perspectives.

“Because culture change works, I founded another company, WetheP. To reawaken the commitment, connection and civic responsibility of  the fuffragists, Great Depression, post-World War II and civil rights years.

There are so many feminist programs, discussions and committees, many for girls’ sports. But I stopped accepting invitations. I offered that I’d attend if some included pick-up games with girls.

One group seemed interested after a Humphrey School of Public Affairs presentation. Discussing with them how stark disparities remain, I shared that women rarely play sports with girls. Which launched them organizing pick-up basketball at my YMCA.

But none ever showed.

Decades ago, research in Carole Gilligan and Lyn Michel Brown’s book “Meeting at the Crossroads” chronicled how cultural norms, not only policies and men, catalyze a devastating drop in girls’ demeanors. Physically and psychologically robust elementary school girls are left overwhelmed by socially fomented fears in middle school. Many disassociate themselves from strong former selves.

“That hasn’t changed,” I said. “You know that.”  My colleague nodded yes.

“I see it in my daughter sometimes.” Here I stifled a  small sob. “My reminder that no matter how we try, society influences us all. It obstructs nearly all parenting, policy and programs.

“I see it at my YMCA, too. Where hordes of boys with enough dads and men to keep them in check are always playing. But men aren’t there for a program. They’re showing by doing in relationships with boys – and the few girls there, too. Girls as energetic, eager and able as the boys, having a blast — but rarely over age 10.

“Adult women? Nearly nonexistent. Though some love to play — they’re ones who put huge efforts into girls’ sports — many athletes themselves. I don’t see all the discussions creating much change.”

Not taking the path they designed

My colleague paused before her brief, spot-on response: “So we designed the path, but aren’t leading by taking it.”

Meanwhile girls still fend off a society that foists their identities’ into the very stereotypes feminism fought.

The solution, I suspect, requires walking away from some political pulpits to instead walk — or play — the themes of all those talks. In new public “demonstrations” that prove the reductive scripts we rail against are wrong. Showing by being in real relationships with real girls on a regular basis, where girls live. Because taking this game to the “arenas” it’s playing out in — like my YMCA — is critical. To win back what’s seems to be getting lost in ivory-tower talks and stadium suites, where male peers compete. And ladies’ lunches, too.

It’s time for the old boys’ “one winner-one loser” game to be over. Having earned policies that balance the playing field, I say we women should proudly own and embody our rights. Imagine if we unselfconsciously personified feminism’s fullest potentials? Culture and civil courts would catch on. So would girls and boys who’ll soon lead them.

A new wave of feminism can help. Led by efforts like Facebook CEO Sheryl Sandberg’s “Lean In“ groups scaling worldwide. And books like “The Athena Doctrine” on how feminine-style strategies are increasingly preferred by winners everywhere.

And the ad by Always that got me. It takes on the subversive “throws like a girl” stereotype. Not debating political correctness, just unmistakably disproving the disparaging claim.

Showing up for an end around stereotypes

No matter if football coaches or others still say such things. They’re likelier to cede some perceived power with consistent contrary evidence. Perhaps even have a  more balanced view.

For example my Dad’s “throw like a girl” taunts gained nuance when he decided my full-on athleticism was “pretty.” And broke gender boundaries when he commented on my son’s “pretty” pirouettes-filled lacrosse-style.

Rather than fight repetitive battles, I’m advocating we get marching to get beyond them. Showing up and showing how to girls (and boys), where they’re at.

Children who’d go on to be “Makers” of the then newly named feminist movement, apparently did too.

It seems a good time to innovate, again. Only now let’s go to where girls gather, mobilizing ourselves to demonstrate how they, too, can be living models of what equality means.

Andrea Morisette Grazzini is the founder and CEO of Minnesota-based WetheP, Inc. The tech-start is developing tools to help people be change-makers.