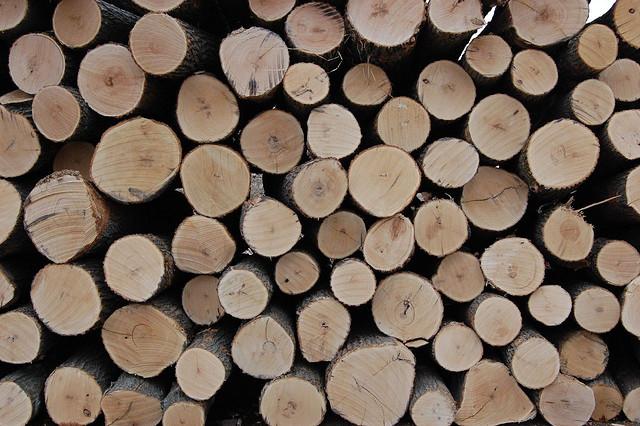 CC/Flickr/Eli Sagor
Could Minnesota’s forestry industry benefit from using timber to build bridges? And would it be worth it?

Minnesota is ripe for a bridge-building industry that would revive lumber production in the state, put northern Minnesota mills and mill workers back in action, and spur “green” economic investment in the state, insists a leading green economic development specialist. Carol Coren, founder and principal with the Cornerstone Ventures group, said Minnesota is among 10 states with timber resources and forest industries that would greatly benefit from a “green” approach to repairing and replacing older bridges with wood expanses and structures.

The concrete and steel industries have dominated road and bridge construction, partly as an outgrowth of the federal interstate highway system. But this ignores the green, or renewable, wood industry that is supplying bridge construction in various parts of Europe and on other continents where deferred maintenance work is using American made and engineered technologies, she said.

Citing just one example, Norway has committed 10 percent of its infrastructure budget to timber bridges designed to meet highway standards for the next 100 years. “Concrete doesn’t do any better than that,” Coren said in a telephone interview.

There is a potential obstacle in the way to our taking a green path to local, state or federal highway and bridge repairs, and it could be huge.

“We may be looking at a new ‘spotted owl’ controversy that could threaten our forest industries,” said Charles Blinn, a University of Minnesota scientist and Extension Service specialist in forest management, harvesting, economics and marketing.

The U.S. Fish and Wildlife Service is scheduled to decide next year if it will add the northern long-eared bat to the national endangered species list. If it does, Blinn said, the forest industries summer harvest could be curtailed when bats are nesting and raising young in the forests.

This raises questions about the viability of Minnesota lumber mills, paper mills and oriented strand board factories that would need to be supplied just from winter logging, he said.

A similar battle in parts of the west and especially in northwest states has raged for more than a decade after different species of the spotted owl were placed on the endangered species list. It has pitted cattle organizations and loggers against conservationists and other environmental groups, and has at times pitted the Fish and Wildlife Service in a public policy management battle with the U.S. Bureau of Land Management.

How this might play out in Minnesota isn’t easy to predict. Loggers, papermakers and forestland owners have a stake in the ongoing health and welfare of the bats as well. The insect-devouring bats help protect trees from diseases and pests.

Adam Belz, writing in the Star Tribune, gives good background on the westward movement of a fungus that is killing bats. In a recent article, he noted the fungus has moved steadily from its first discovery in Upstate New York in 2006 to two findings of the fungus in southeast and northeast Minnesota.

Coren, whose green — “triple bottom line” — economic development consultancy has offices in both Southampton, Pennsylvania, and Portland, Oregon, said something akin to a “Manhattan Project” is needed to further develop the human and science resources needed to bring timber bridge development back in vogue. We should add a major research commitment to bat health and wildlife management to the list of priority state and federal research commitments.

A research paper for prospective clients and interested parties by Coren notes the U.S. Forest Service launched studies in 1988, called the Timber Bridge Initiative, and the U.S. Intermodal Surface Transportation Efficiency Act of 1991 funded studies that show timber bridges to be viable alternatives to concrete bridges. More than a million federal, state and local bridges have been identified as obsolete or decaying, she said.

Those needs are expanding with time. Partly in response to the past decade’s Great Recession and partly in response to political pressure that favored deferred maintenance over infrastructure investment, repair work off the interstate freeway system has lagged.

That is one way to look at deferred maintenance. Another is to look at the impacts the Great Recession, the housing collapse, and lagging public infrastructure spending has had on our wood industries.

In its 2013 annual update [PDF] of Minnesota’s Forest Resources, released in July, the Minnesota Department of Natural Resources noted that overall net growth for all species continued to outpace timber harvest levels in 2012, the last year for which data are available. This continues a problem for forest management for the industry and state continuing on from the housing crisis.

There are overwhelming human and natural resource reasons for federal and state research efforts on bats and bridges, where feasible. Going green is yet another strong reason for such public investment.

Lee Egerstrom is an Economic Development Fellow at Minnesota 2020, a nonpartisan, progressive think tank based in St. Paul; this commentary originally appeared on its website. Egerstrom worked for 36 years as a business journalist and as a Washington correspondent for the St. Paul Pioneer Press and its former parent company, Knight Ridder Newspapers.

Green research is needed for Minnesota bats and bridges