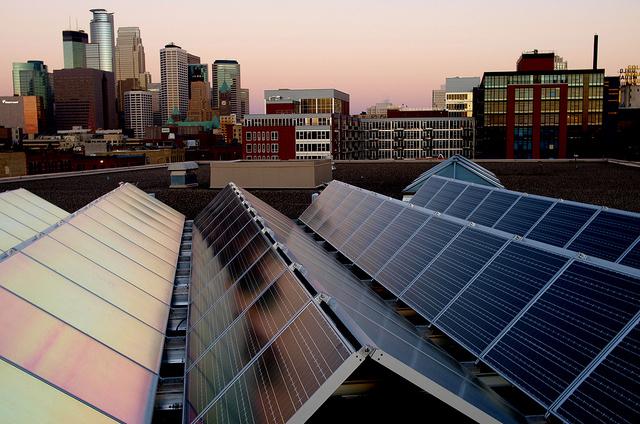 CC/Flickr/Minnesota Solar Challenge
We have goals of generating 1.5 percent of our electricity need by 2020 from solar energy development.

Minnesotans are squinting up at the sun and leaning into the wind in efforts to link their pocketbooks and the natural environment to benefit both from clean energy development and economic development. We now get about 15 percent of our total electricity generated by windmills on wind farms, primarily in southern and southwestern Minnesota. We have goals of generating 1.5 percent of our electricity need by 2020 from solar energy development, but the flurry of development activity currently under way suggests that may be a low target.

Minnesota Community Solar (MNCS) is now expanding into rural communities. It announced in August it is building a four-acre Gaylord Community Solar Garden in the Gaylord Industrial Park west of the Twin Cities. The project is a partnership with local social entrepreneurs Steve Mangold and Paula King with Mangold’s Front Row Energy company.

Similar rural-sited projects are on the drawing board, Wakely said.

With the Gaylord project, residents of Carver, Le Sueur, McLeod, Nicollet, Renville, Scott and Sibley counties in Xcel Energy’s distribution areas can “subscribe,” or contract for solar produced energy. Subscribers select the number of units, or “leaves” that suit their household or business needs. Current projections show they may save as much as 35 percent off their electricity bills during the 25-years of the contract.

The rapid spread and development of solar energy generation was explained by David Shaffer in a recent Star Tribune article and by Bob Shaw in the St. Paul Pioneer Press. Their articles work as a primer for interested people for whom solar energy development also introduces new applied technology terminology, such as solar gardens, leaf and leaves, and the larger collection of solar panels called arrays.

From an economic viewpoint, however, the current spark of solar energy development does show a marriage of increasingly popular objectives with enlightened public policy. A 2013 Minnesota law makes this development possible, and the Public Utilities Commission (PUC) recently rationalized how solar energy can be valued and priced.

At Gaylord, the sun will do most of the heavy work after construction so it won’t be a big jobs producer, said city administrator Kevin McCann. But, he said, the city will be a subscriber and will benefit over time from lower energy costs. Moreover, it will be an incentive for companies to locate and expand at Gaylord.

From another angle, solar development is economic development because MNCS is using Minnesota made products and technology “when possible.” The solar collecting panels, for instance, are made in Bloomington.

Living wages are being paid, and local products are intentionally used. “We aren’t in the ‘race to the bottom.’ We aren’t going after products where we could get them the cheapest,” said MNCS’ Wakely.

All this spills over with growth in a technology-based new industry. In March this year, the Clean Energy Resource Teams (CERTs) and Midwest Renewable Energy Association held a solar conference at the University of St. Thomas that acknowledged both the rapid growth of solar in Minnesota and the catching up work still needed.

They noted in materials for the conference that Minnesota had 864 solar jobs in 2013, a 72 percent increase from the previous year. But that ranked Minnesota 31st among states and the District of Columbia.

Another quantum leap in solar employment can be expected this year based on the projects described by Shaffer and Shaw that are in various stages of planning and development around the state.

On another bright note, solar energy development appeals to entrepreneurs and investors who have social goals combining economic and environmental sustainability, said Wakely. That is evident with the partnership MNCS has with social investor Mangold and his wife King, at Gaylord. King is the founding dean of St. Catherine University’s School of Business and Leadership.

The management team at Minnesota Community Solar also fit that mold. They include founder Dustin Denison who worked in mechanical and electrical trades before starting Applied Energy Innovations, a Minneapolis-based solar installation company. Others include various environmental activists, like Wakely and subscription manager Dana Hallstrom, and researchers and designers such as co-founder Peter Teigland and Steve Coleman.

Earlier this year, MNCS teamed with Bethel Evangelical Lutheran Church in south Minneapolis to place a community solar garden atop the congregation’s education building – the first such project with a faith-based organization.

The convergence of interests with clean technology attracts attention. The Minnesota High Tech Association recently nominated Minnesota Community Solar for its annual Tekne Energy Award along with Ecolab, of St. Paul; and RA Knowledge, of Minneapolis. In all, the high tech association makes 12 different awards among 36 innovative nominees.

Nominated companies include huge, well-established companies with innovative products such as 3M, of Maplewood, on down to start-ups of less than three years that include Gravie, Minneapolis; NimbeLink, Plymouth, and NxThera, Maple Grove.

Presentation of the Tekne Awards will be made Nov.13 at the Minneapolis Convention Center.

Lee Egerstrom is an Economic Development Fellow at Minnesota 2020, a nonpartisan, progressive think tank based in St. Paul; this commentary originally appeared on its website. Egerstrom worked for 36 years as a business journalist and as a Washington correspondent for the St. Paul Pioneer Press and its former parent company, Knight Ridder Newspapers.

Solar in Minnesota: a marriage of increasingly popular objectives with enlightened public policy