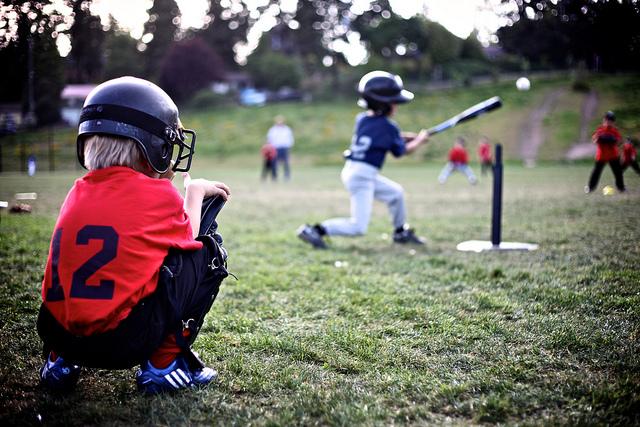 CC/Flickr/clappstar
Have you ever heard of a T-ball game called early so kids can go home to work on their diphthongs?

As all the controversy swirls around Adrian Peterson, Ray Rice, Roger Goodell and the latest infraction/crime committed by a professional football player I think it is time to step back and realize that this problem does not start at the NFL. Special status and opportunities are given to these young athletes as well as to professional football and basketball players and a few other chosen men. These indulgences can lead them to believe that they are above the law.

It starts so innocently. In second grade spelling tests are suspended during T-ball season because “everyone” is on a team; junior high students are excused from classes when the high school makes the state tournament; and the “star” quarterback is invited to the 7th-grade football practice to brag about the scholarships coming his way and encourage the boys to follow his path.

None of these practices on their own are toxic; they are the beginning of a lack of balance. Have you ever heard of a T-ball game called early so kids can go home to work on their diphthongs; junior high students dismissed to watch the state Mock Trial finals; or National Merit Scholars invited to come inspire a team? It is no wonder that many young men, especially young men of color envision sports as a path to success.

The numbers are not on their side.

The ones who are succeeding are not paid until they reach the pros, but they are rewarded at special training tables, with college schedules that allow them to pass without academic rigor, and with every facility to build their muscle bulk and make them modern gladiators. We are learning more and more how they risk their health and their brains as paid coaches, trainers, and fans encourage them to play through pain. They learn that they are special and that if the ref doesn’t see it, it never happened. No doubt their fine physical condition and status impact their relationship with women in similar ways.

For those young men who do reach the NFL, the rewards are amazing — money, cars, cheering fans, and an entourage just for running faster and hitting harder. How can we —whose taxes and cheering support this system — not take some responsibility when these young men believe that hitting harder and yelling louder work at home too?

How can we not insist that all of those who profit from bulking up these players without giving them guidance and standards take some responsibility for the results? We need to yell just as loudly for the vulnerable 4-year-olds and the players’ fiancées as we do for the Super Bowl combatants.

If we don’t, we are the losers.

Beth-Ann Bloom is a mom, genetic counselor and community volunteer from Woodbury.