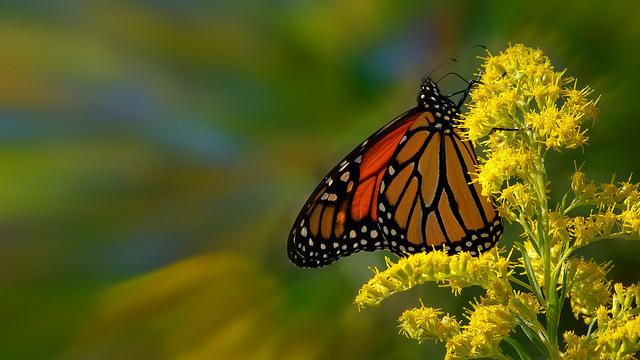 CC/Flickr/coloneljohnbritt
Here in Minnesota, we’re seeing in our yards what people across America have seen in recent years: startlingly fewer numbers of monarchs.

Long before I became a biologist and lawyer working to save endangered plants and animals, I was completely captivated by monarch butterflies.

As a child growing up in Blaine, I’d lie flat on my back out in the September sun and stare up at the clouds, watching for streams of monarchs fluttering across the lush blue Minnesota sky on the beginning of their remarkable journey to their high-mountain over-wintering grounds in central Mexico.

It’s a love I’ve passed on to my two children. We planted some of our suburban yard in native prairie, including the monarch caterpillar’s only food, milkweed, which in recent years has declined drastically across the Midwest with the increasing use of the pesticide Roundup on crops genetically modified to be resistant to it.

Now, here in Minnesota, we’re seeing in our yards what people across America have seen in recent years: startlingly fewer numbers of monarchs.

Down to the lowest number ever recorded

In the past 20 years their population has declined by 90 percent, down from a high of 1 billion in the mid-1990s to only 35 million last winter, the lowest number ever recorded.

Though as a scientist I understand that insect populations naturally show great fluctuations, I also understand we risk pushing monarchs to extinction if we turn away from the mounting evidence that they are in very real trouble.

Back in 2002 a single winter storm killed an estimated 500 million monarchs — 14 times the size of the entire current population. And over the past two decades monarchs have lost millions of acres of habitat – a total area estimated to be about the size of Texas.

Climate change also threatens the long-term survival of the butterflies in their over-wintering grounds in Mexico, which are projected to become climatically unsuitable for monarchs in the coming decades. Similarly, large parts of their U.S. summer breeding grounds are predicted to become too hot for caterpillars to survive.

That’s why the organization where I work, the Center for Biological Diversity, joined with the Center for Food Safety, the Xerces Society and preeminent monarch researcher Lincoln Brower in filing a petition asking the U.S. Fish and Wildlife Service (FWS) to extend Endangered Species Act protection to the butterflies before it’s too late.

The monarch’s decline, and the decline of many other species at the heart of my conservation work, from bees and bats to frogs, turtles, lizards and snakes, is a wakeup call that we are paving and spraying our way to a less beautiful and dangerously less-diverse planet.

To combat that trend, much of my own work in recent years has been pushing the Environmental Protection Agency and the FWS to live up to their legal responsibility to protect all of us from the mounting threat of the 1 billion pounds of pesticides dumped on the North American landscape every year.

Just a few weeks ago the Center entered a nationwide settlement with FWS requiring the agency to analyze impacts on endangered species across the country from five dangerous pesticides found to be toxic to wildlife and that may pose a health risk to humans.

And after we joined the Center for Food Safety in petitioning the FWS to address the use of a highly toxic class of pesticides linked to the widespread collapse of bee colonies throughout the U.S., last month the agency announced federal wildlife refuges would phase out their use.

These important steps give me hope that we’re beginning to understand the importance of protecting the little things that literally hold together the world we all share, from birds and bees to frogs and butterflies.

And I see hope closer to home, as well.

My 7-year old daughter loves to comb through the milkweeds looking for monarch caterpillars. This year she found her smallest one ever – barely an eighth-of-an-inch long – and named it Tiny.

She and the neighborhood kids fed it milkweed and patiently watched as it slowly transformed over several weeks — until one day it blossomed into a beautiful, healthy monarch butterfly that they released into the Minnesota sky.

Minnesota native Collette Adkins Giese is a biologist and senior staff attorney in the Minneapolis office of the Center for Biological Diversity.