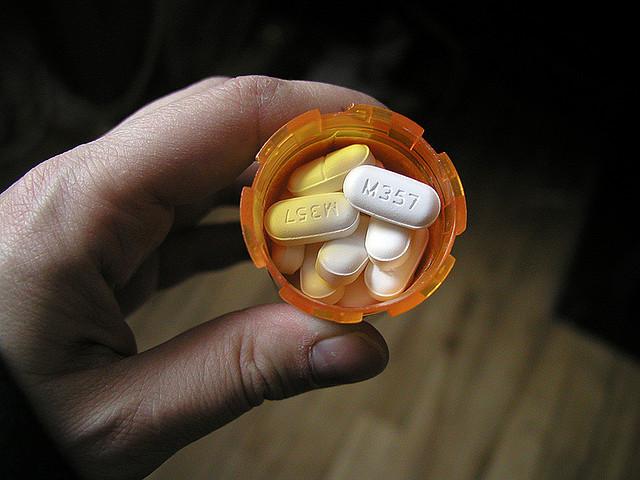 CC/Flickr/sharyn morrow
The overtreating of chronic pain with powerful pain killers such as OxyContin and Vicodin has created a flood of dangerous pills in society.

For decades an impressive battle has been waged to reduce automobile crashes. Groups like MADD helped cut drunken driving fatalities, laws have required seat belt use and advocacy groups have been successful in forcing improved safety components be built into vehicles.

The results have been dramatic. In Minnesota the number of vehicle fatalities went from more than 600 in 2000 down to 374 last year.

The same commitment is needed to combat a growing problem that is taking more Minnesotans’ lives.

The state Department of Health recently reported that for the first time the number of drug overdose deaths in the state — 507 last year — has surpassed the number of people killed in vehicles crashes. The trend mimics national data.

Many of the drug overdose deaths came from heroin (91) but even more (200) come from prescription pain drugs.

The Mankato area has experienced the tragedy of accidental overdose deaths, including recent incidents of young people who died after taking synthetic drugs, drugs that have created a new and growing threat.

Reducing drug deaths requires a multi-faceted approach, from providing more access to drug treatment services to cracking down on synthetic drug production and reducing the flow of prescription drugs.

Attacking the abuse of prescription pain killers needs particular attention. The overtreating of chronic pain with powerful pain killers such as OxyContin and Vicodin has created a flood of dangerous pills in society. Many people caught with illicit prescription drugs say they got them from friends or family. That’s because patients who may only need a few pills to overcome their pain end up being prescribed several dozen of them.

The problem is beginning to be recognized and addressed. Doctors are more aware of scrutinizing those who seek pain killers and are more likely to limit the number of pain killers and refills given to patients. But more needs to be done to ensure those suffering from severe pain get the help they need and deserve while ensuring that far fewer of the potent pills are circulating.

Better monitoring and restricting regulated prescription drugs is relatively simple compared to reducing the flow of illegal drugs, such as heroin, being freely funneled into the country by Mexican drug cartels.

One thing that has had little success is the long War on Drugs that focuses on jailing users and small-time dealers. Federal policies that help Mexico reduce its rampant drug trade and improve its security and economy, as well as more support for drug users to help them break their addictions seem the only practical routes to cut into illegal drug use.

Combating drug overdose deaths is much more complicated than reducing the number of people killed in vehicle crashes. But it’s an effort that’s needed to reduce the personal suffering of users and their families and the financial costs to society.