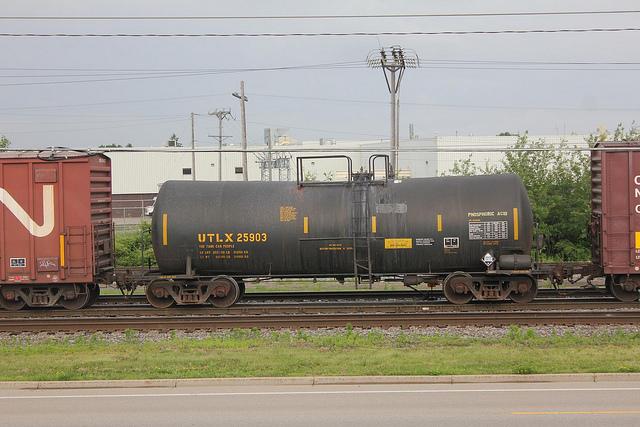 CC/Flickr/LoadStone
Balancing the transport needs of the nation’s agriculture, energy and industrial sectors — as well as Amtrak passenger timetables severely disrupted by rail bottlenecks — is a difficult but necessary job.

It’s been a while since an oil train exploded anywhere in America, so the red-hot controversy over shipping North Dakota crude by rail has cooled, only to be replaced by another involving the Engine that Divides Us. This one’s a heavyweight slugfest between the railroads and the giants of U.S. agriculture and industry. Then, leaders of the National Farmers Union descended on Washington to protest a railcar shortage that, at a time of bumper crops and depressed grain prices, is further eroding profits, in some cases due to fines for late deliveries. “It should really be imposed on the railroad that did not deliver on time, not the grain deliverer,” Doug Sombke, the South Dakota Farmers Union president, told Bloomberg Businessweek.

Industrial companies are fighting the railroads mainly over price and relative profitability. Depending on where you set the baseline, rail shipping rates have almost doubled (since 2001, according to the American Chemistry Council) or fallen by nearly half adjusted for inflation (since the 1980 Staggers Act deregulation, according to the Association of American Railroads). Stock-market appreciation for the railroads, which have consolidated from about 40 Class I lines pre-Staggers to seven today, has far outstripped that of chemical firms as measured by Standard & Poor’s indexes, however.

“There will always be an ongoing debate between the shippers and the rails,” transport analyst Justin Long told Bloomberg News.

That’s been true since the 1800s, but the challenges Upper Midwest farmers face to ship their crops today may be unprecedented. With Bakken oil hogging the rails, allegedly in exchange for under-the-table payment premiums, 100 million bushels of grain sat in Minnesota elevators and another 100 million bushels were stored on farms, the Star Tribune reported in late August.

“When you’re sitting in a grain elevator waiting for cars to load, and every day you see oil trains pass by, it just adds insult to injury,” Bob Zelenka of the Minnesota Grain and Feed Association told the newspaper. Meanwhile, a state corn harvest estimated at 1.3 billion bushels is about to begin.

Not all of that bounty will move by rail. Much of it usually goes downriver by barge, and it’s likely that some along rail lines will be switched to big trucks. But that may pile more costs on Minnesota farmers who lost $109 million in revenue during just three spring months this year, mainly because of shipping problems, the state Department of Agriculture reported.

The Bismarck Tribune reported in August that access to rail cars was fetching up to $4,000 on a secondary market, and that some millers paid an extra $1.50 a bushel for over-the-road trucking when their grain supplies ran short. North Dakota officials signed a deal with the Port of Vancouver, Washington, to send nonfarm products from the Pacific Ocean port by 180 dedicated rail cars that will regularly return loaded with Peace Garden State grain.

“We cannot store our way to prosperity,” Agriculture Commissioner Doug Goehring told the Forum News Service. Some critics questioned the food safety of shipping grain in boxcars that also carry cement, fertilizer and other products, but desperate times call for desperate measures.

How desperate is it? The Surface Transportation Board can order railroads to prioritize some shipments over others but rarely does so, according to another Bloomberg News report. A board spokesman said it intervenes only to avoid “substantial adverse effects.”

In recent weeks, bipartisan elected leaders from conservatives in the Dakotas to Minnesota Gov. Mark Dayton have suggested the time for action has arrived. As an anticipated record harvest approaches, “There’s great apprehension in how things will go this fall,” North Dakota Gov. Jack Dalrymple told the board at a hearing in Fargo. Dayton wrote to the board of “the dire circumstances that Minnesota farmers face and the need for increased accountability and clarity” from the railroads.

Balancing the transport needs of the nation’s agriculture, energy and industrial sectors — as well as Amtrak passenger timetables severely disrupted by rail bottlenecks — is a difficult but necessary job. An opaque deregulated market seems to be making a mess of it. Could some old-fashioned government command and control do any worse?

Conrad deFiebre wrote this piece as a Transportation Fellow at Minnesota 2020. This commentary originally appeared on its website.