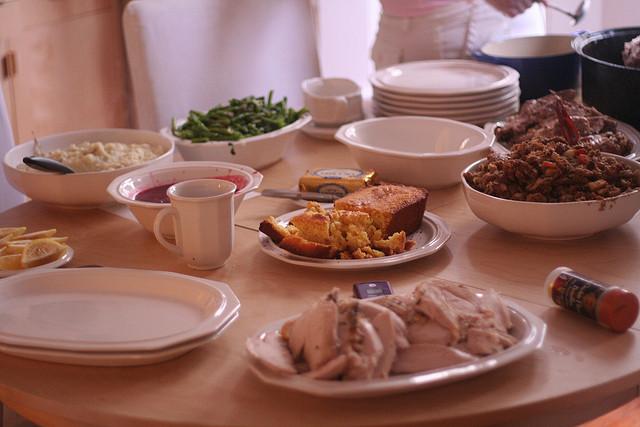 CC/Flickr/Christopher Schmidt
Thanksgiving should be a time to take a break from life’s miseries.

If you’re not still paying attention to Kim Kardashian’s sadly placed champagne glass, you may have heard that Thanksgiving is nigh.

But for many, this Thanksgiving will not be the holiday that may exist somewhere in hallucination or even in reality, with a perfectly roasted Norman Rockwell turkey meeting a cheerful family with not even one drunk uncle passed out in the cranberry sauce.

No, for these folks, Thanksgiving will involve skipping the bird party altogether or feigning mortal illness so as to miss the pumpkin pie, arguments about politicians needing to be impeached, or enjoyable conversations with relatives one doesn’t see quite enough. These people will be at any number of stores at on Thanksgiving Day itself, wrapped for warmth in sleeping or trash bags and ready to risk mortal injury (for someone else) in order to pay $50 for a 1,000-inch screen television or $20 for nine parkas.

I know I’m not the first to whine about stores opening on the one holiday that, until relatively recently, was spared much of the computer-generated garishness of the ubiquitous promotion otherwise known as Christmas. Although I am someone who wants to know how much more commercialization holidays such as Thanksgiving and Christmas can withstand before they cease to be the holidays millions have known for decades. Before they turn into any other days, except with lots more sparkly decorations. Days where you never stop posting psycho cat pictures on Facebook and never stop shopping for things you absolutely, positively must possess.

Before you seal me in “It’s a Wonderful Life” museum storage, let me say I realize we all need and want stuff. Sometimes you do need a 1,000-inch screen television. And in a country not fully recovered from the Great Recession, lots of people must do what they can to save money on things that seem to make life more pleasant. That might include wearing sleeping bags outside of stores at 4 a.m. And most store employees need the employment, including those who used to make a lot more doing other things before the Great Recession.

But in a world where you can buy anything from dirty sex to cleansing soap online any day, at any time, from almost any part of the world, some of you might want to know why some stores feel the need to open on Thanksgiving.

This year, we might be able to assess at least part of the blame on that much maligned and much celebrated 80 million strong gathering of people who are between the ages of 18 and 34. The group also known as the millennials. Results from a recent national survey conducted by LoyaltyOne indicate that half of the respondents between 18 and 24 think it’s a terrific idea for stores to be open on Thanksgiving Day. And results from a survey done by Offer.com showed that 67 percent of people between 18 and 34 do plan to shop on Thanksgiving Day, either online or at a store.

But, findings from a Skout survey showed that 77 percent of respondents ages 18 to 39 said stores should not be open on Thanksgiving so store employees can be with their own friends and families. Yes, the results seem contradictory. My guess is that a fair number of the respondents perhaps thought stores could be open, stocked and blaring “Teenage Christmas” without human employees.

Still, I wasn’t shocked by these results. Many millennials have been badly battered by their baby boomer parents’ divorces and economic hardships. Many have had family lives that, even with the assistance of hallucinatory drugs, wouldn’t remotely resemble anything painted by Norman Rockwell. Many wouldn’t recognize a perfectly roasted turkey if it sent them a text. I guess if one must choose between shopping or going to Thanksgiving fight clubs featuring your mother, her loser third husband, and your father and his aspartame sweet girlfriend who is only two years older than you, well, I might be buying parkas too.

And while I somewhat understand why many millennials and others of any age might don sleeping bags on Thanksgiving to buy cheap 1,000-inch screens, I still mourn the loss of real holidays, holidays that exist without stores jammed with rabid shoppers.

Because despite drunk uncles, arguments about whether John Boehner looks like the Grinch, and turkeys that may look more toasted than roasted, Thanksgiving should be a time to take a break from life’s miseries. A time to sit and have a few whiskies (or sodas) with a cousin you like, a neighbor or your best friend. A time to be thankful for something. If you’re lucky enough to have a job that lets you have Thanksgiving off, that’s probably worth some thanks. If you’re fortunate enough to be able to buy a 1,000-inch screen television on Black Friday, give some thanks for that too.

Of course, we’ll all understand if you don’t want to give thanks for Kim Kardashian’s champagne glass.

Even if it isn’t a perfect Norman Rockwell day, let’s keep Thanksgiving a real holiday