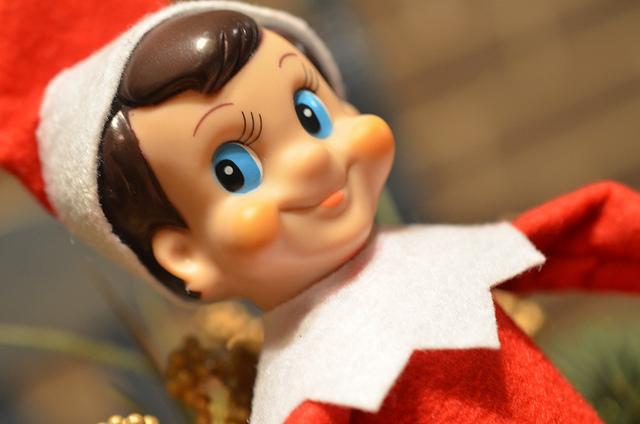 CC/Flickr/Michael Kappel
There is something NSA and drone-surveillance about that not-to-be-touched Elf on the Shelf as it peers each day from different places in the house.

Is it OK to admit that “Elf on the Shelf” gives me the creeps?

Not that I ever was bothered by Santa knowing whether I’d been naughty or nice, or, for that matter, by the threat of a lump of coal instead of presents. The kids I played with when I was a child were pretty certain Santa was neither petty nor spiteful when it came to minor slipups. For instance, if your brother snapped you with a wet dishtowel when you were washing and he supposedly was drying the supper dishes, Santa wasn’t going to freak out if you retaliated by hiding your brother’s marbles — including his steelies — between the mattress and box springs of his bed.

The point is, I don’t think I’m overly sensitive about Santa’s list. Still, there is something NSA and drone-surveillance about that not-to-be-touched Elf on the Shelf as it peers each day from different places in the house. Much like Canadian professor Laura Pinto, who co-authored an article on the subject for the Canadian Center for Policy Alternatives, I’ve wondered whether children who “grow up thinking it’s cool for the elves to watch [them] and report back to Santa,” will later find it acceptable “for the NSA to watch [them] and report back to the government.

Is the adorable Elf nothing more than a Trojan horse, “set[ing] children up for dangerous, uncritical acceptance of power structures”?

It’s not as if this is the first generation of adults to have problems with messages children might take from the hoopla around Santa. Looking back at the time when I grew up, the all-seeing, all-knowing Santa bore a discomfiting similarity to the Sunday school version of Old Testament God. Naughty and sinful were pretty hard to differentiate. Popular songs, such as “Santa Claus is Coming to Town” didn’t help. (“He sees you when you’re sleeping; he knows when you’re awake. He knows if you’ve been bad or good ….”)

That grand old cowboy singer Gene Autry really messed with kids’ minds. Remembered for being first to sing, “Rudolph the Red Nosed Reindeer,” Autry wrote and recorded a Santa song that was a big hit in the ’50s called “Here Comes Santa Claus”:

He doesn’t care if you’re rich or poor; he loves you just the same.

Santa knows we’re all God’s children; that makes everything right.

So fill your hearts with Christmas cheer, ‘cause Santa Claus comes tonight ….

Peace on earth will come to all if we just follow the light.

So let’s give thanks to the Lord above that Santa Claus comes tonight.

No wonder the “commercialization of Christmas” became the adult concern for children in the 1950s and 1960s, a concern quite different from that of the late 1800s when the adult worry was childhood skepticism and disbelief. In 1897 a newspaper editor penned the famous reply, “Yes, Virginia, there is a Santa Claus,” to the letter of an unconvinced girl.

In today’s world the adult worry of a commercialized Christmas has morphed into a political “War on Christmas.” The right thinks Christians are discriminated against and decrees a pox on your house if you say “Happy Holidays” instead of “Merry Christmas.” And the left? Well, much as it pains me to say so, the left sees Elf on the Shelf and thinks NSA.

When it comes to Santa and his trappings, children are so much smarter than adults. Magic is magic: mysterious, thrilling, enchanting. The first Christmas our oldest child was aware of Santa, with eyes shining she told how he would come down the chimney, have his milk and cookies, and leave presents behind the door. (Behind the door?)

Made no sense to my husband and me, but doggoned if that wasn’t exactly what Santa did.

Elf on the Shelf: the latest in a long line of Christmas creepiness