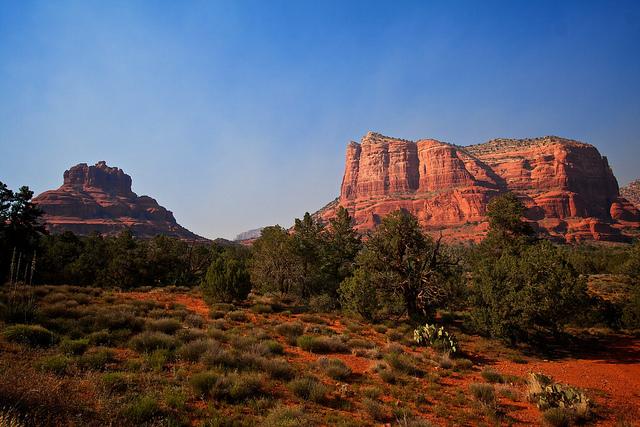 CC/Flickr/Niharb
I could buy a first-class ticket for my mother if I had a dollar for every tale I’ve heard about those who thought life in the eternal sun would be a heavenly thing indeed, only to find it a hot, well-lit, lonely space.

A few months ago I told MinnPost readers about my mother’s stroke, which required me to get to Arizona and its justifiably infamous summer swelter faster right away so I could oversee her recovery.

Six months on, I’m moving my mostly recuperated, reasonably cooperative mum and myself back to the Land of Frozen Sky Blue Waters and the cold everyone in Arizona speaks of with a dread better reserved for the possibility of Justin Bieber becoming president than for something like weather. I didn’t think I’d escape the desert so quickly, but I got lucky and sold my mother’s house fast. And for every dollar of my asking price.

While packing and telling people I’ll take tater tot hotdish and a fairly strong economy over 117 degree temperatures and bark scorpion stings, I’ve thought a lot about what I’ve learned in The Land of Seniors. Including quite a few seniors who want retirements as close to Heaven as possible, only without dying and without shelling out much cash.

Until my mother moved four years ago to her gated community (well, it’s gated when the gate works), I was like a lot of people who thought those who retire to places like Arizona or Florida are mostly happy, healthy campers, shaking margaritas poolside in Captain Steubing Love Boat dress whites while taunting their children about snow shoveling. I’ve seen some of that, mostly when I’ve been up in Phoenix in areas heavily populated by fairly wealthy, relatively younger (less than age 72 or so) retirees.

But within my mother’s community and others nearby, I’ve seen unhappier styles of retirement. Not all are like Hell, but lots aren’t what AARP touts in its isn’t-getting-old-a-heavenly-thing-indeed advertisements.

When I said some people move to Arizona for cheap retirements, I wasn’t suffering from heatstroke. Fairly well appointed houses in my mother’s community ranging between four and 10 years old and between 1,300 and 1,850 square feet have sold within the past four years for less than $130,000 to about $180,000. Even so, La Vida Arizona is unaffordable for a lot of people. If I had a dollar for every story I’ve heard about how many house sales in this snowbird-heavy area are foreclosures, I could probably fly home first class clutching a bottle of Pol Roger champagne.

Some of the stories are brutal. People forced into early retirements during the Great Recession who still thought they could manage two homes if they bought a cheap enough winter residence. Not willing to give up their primary homes, the Arizona places go into foreclosure.

I could buy a first-class ticket for my mother if I had a dollar for every tale I’ve heard about those who thought life in the eternal sun would be a heavenly thing indeed, only to find it a hot, well-lit, lonely space. For instance, if one happens to be a Democrat in much of Retirement Arizona, it’s advisable to restrict talk to vital issues such as In-N-Out’s cheeseburgers. To be sure, Democrats exist. The eight of us sit at a distant table’s end at clubhouse social events and whisper while saying things such as “Obamacare” or “Jack Kennedy.”

And as most of the people in these communities appear to be couples in their 60s or early 70s who are still (and occasionally, happily) married to their first spouse, people like my 82-year-old twice widowed mother who put an Obama 2012 sign on her rock garden are often pretty miserable. Mum, a very social person who volunteered at the town’s senior center and homeless kitchen, was trying to sell her house before she had her stroke because she felt so out of place.

I asked her more than once why she moved here. Well, she was sick of Wisconsin’s cold. It was cheap. She wanted a more interesting life. And I wondered how I became such a wanderer.

After six months in this well-furnished yet exhausting exile, I’ve certainly had some brutal retirement truths baked into me. Resulting advice: Save your money like a fiend. Pray you don’t get laid off or are forced out of your job before you feel ready. Take care of yourself and hope to hell you don’t get sick. Make sure you have good supplemental Medicare coverage. Reconsider your views toward cold and snow.

And maybe hope you have a spinster daughter who can drop everything to care for you if you do fall ill.