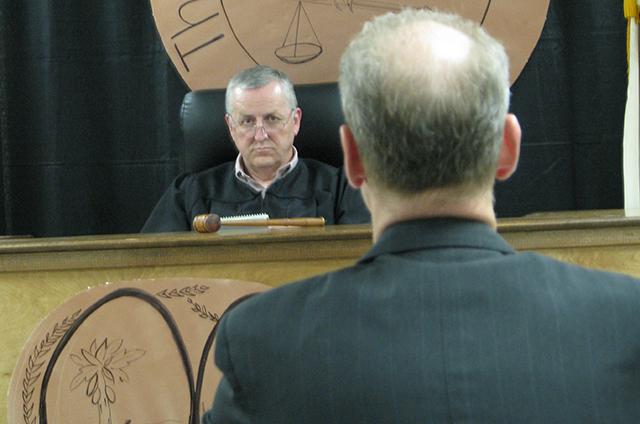 This is the third in a series of occasional commentaries on the judicial system from the perspective of a District Court judge.

Judges like lawyers — a lot — most of the time.

There are few things more pleasing to a judge than to see the work of really skilled lawyers. Sometimes the skill is on display in the courtroom. Effective oral arguments and penetrating cross examinations are a pleasure for a judge to behold. Really good lawyers make it look easy, but the ease is only an illusion. Effective courtroom presentations take great skill, often honed over years of practice.

Judges aren’t impressed with a lawyer’s grand gestures or the florid verbosity we see on TV or at the movies. What a judge likes about lawyers is that they come to court prepared to harness the facts and the law, and present them in a logical fashion that appeals not so much to the heart as to the mind. Few people, whether judges or jurors, are impressed by the verbal flourish.

Civil lawyers are among the most skilled practitioners in our community. They regularly handle complex matters that require extraordinary intellect, organization and strategical thinking. But I’ve been equally impressed by some criminal lawyers. I’ve seen criminal lawyers argue successfully in cases where I thought their client had no possibility of success. Sometimes the lawyers relied on a careful explanation of the facts in which they mined every morsel of information in their favor. Other times their explanations relied more on a well-developed discussion of the standard of proof for the jury to consider in making a decision. I’ve seen both prosecutors and defense attorneys who impressed with their preparation. Judges appreciate the work of criminal lawyers because their good work is essential to the operation of our system of justice.

Lawyers from large firms often perform well, but they have no monopoly on the skills judges hold dear. Judges appreciate solo practitioners at least as much. I observed a solo practitioner cross examine an expert witness in a dental malpractice case that was simply stunning. He cross examined an intelligent, sophisticated witness for almost an hour without the use of notes, moving from fact to fact and subject to subject, all the while carefully highlighting only the facts most in his client’s favor.

Judges are equally impressed with lawyers who submit excellent briefs that effectively discuss the law and the facts. To a judge, good briefs are like manna from heaven — they benefit and sustain us. Good briefs provide the law and facts a judge must consider in making a decision.

I received excellent briefs in a case involving an esoteric subject of corporate law — squeeze-out mergers. In the corporate world, like the real world, people sometimes find they can’t work together anymore, or their financial objectives conflict. Squeeze-out mergers permit shareholders of small corporations to squeeze out another shareholder from the business. It sounds nasty, and sometimes it is, but in some circumstances it’s perfectly appropriate.

I knew little about squeeze-out mergers before the case, but by the time I issued my decision, I’d become studied in the relevant corporate law thanks to the fine work of lawyers from both sides. The lawyers had intimate knowledge of the relevant case law and statutes, and skillfully wove the facts and law into coherent, persuasive arguments. They did exactly what lawyers are supposed to do; they effectively argued for their clients, and gave me the resources to make my decision.

Judges like lawyers, as well, who are reasonable people. Judging can be stressful — dealing with people all day long who disagree. Judges make an infinite number of decisions in criminal and civil cases, and those involving families and children. These decisions can have an immense impact on a person’s life. Endless decision making can cause even the calmest judges sleepless nights; some refer to this as decisional fatigue. It makes a difference, then, when lawyers tamp down the dissent, agree when they can, and disagree only on the most important, contentious points. Good lawyers bring their disagreements to the judge only when they can’t work them out through discussion and compromise. Judges have a high regard for lawyers who discern when they should argue and when they should agree.

Judges also have a high regard for lawyers who are nice people. I can’t count the number of times lawyers have come into my chambers to discuss matters in a manner that puts everyone at ease. Judges, like people everywhere, react well to those who are honest and straightforward, and pleasant. Lawyers often impress more when they are kind to their opponents, and when they are more humble than arrogant.

Judges like lawyers, too, because they tend to be interesting people. Lawyers come from all walks of life. Some are musicians, actors, craftsmen or artists, writers, mechanics, or athletes. Some lawyers have accomplished great things in the community, in politics, or in business. Lawyers are rarely boring.

But not every lawyer is likable, or skilled. Some lawyers are brittle, arrogant or only semi-honest. Some lawyers come to court unprepared. Some lawyers submit briefs that fail to adequately address the essential issues, or that read like a stream of consciousness, making little sense. Others lawyers think they’re case jockeys — simply moving cases along without developing legal arguments.

Bad lawyering is a concern because there are limitations to what a judge can do to level the playing field when lawyers don’t do their jobs. This is especially true in trial. I sometimes cringe when a lawyer doesn’t object to testimony that is clearly hearsay, or allows another lawyer to lead the witness to such an extent it seems the lawyer is testifying rather than the witness.

In one fraud case the plaintiff’s lawyer simply failed to make the arguments he had to make in order to have a chance of winning. When I met with the jurors after the trial, I found out that they thought the defendant was dishonest. And they didn’t like or trust the defendant’s lawyers. But the jurors were frustrated because the plaintiff’s final argument, rambling and disorganized, did nothing to help them figure out how they could fit the evidence together and find in the plaintiff’s favor. This was one of those cases where the quality of the lawyering really made a difference in the outcome of the lawsuit.

Our system depends on good advocacy

But usually lawyers do their job, and when they do judges appreciate it because it’s essential to our system of justice. Our system depends on good advocacy. Lawyers don’t have to be Clarence Darrow or TV’s Perry Mason — they just have to do their job in a workmanlike manner.

I handled one case where the plaintiff clearly had the better argument but the defendant refused to settle the case, even for half the amount claimed. The defendants were so sure they had the superior lawyer they thought they would win at trial. It didn’t happen. The plaintiff’s lawyers did a workmanlike job in getting the evidence to the jury and in arguing the case — and they prevailed. That’s how the system is supposed to work. It doesn’t mean that highly skilled lawyers aren’t valued. It only means that the facts and the law are the most important elements in determining the final result.

Finally, judges like lawyers who volunteer. The cost of legal representation is prohibitive to most individuals. But there are lawyers throughout the community who volunteer their professional time to represent those who can’t afford representation. They represent children in foster care, the disabled, women seeking orders for protection from an abusive boyfriend or spouse, the poor who face the loss of their homes, immigrants who are discriminated against or who face deportation, and others in the community who can’t afford representation, but desperately need help. Judges can’t say enough good about lawyers who volunteer.

It makes my heart soar to see lawyers do well. We have a wonderful system of justice — not a perfect one, but one that works extraordinarily well when lawyers do their job. That’s why judges like lawyers; they make our system of justice work and when they excel, it’s a pleasure to behold — like a work of art.

What do judges think of lawyers?