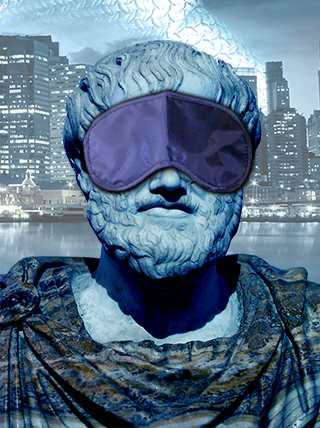 I may be one of the only people around thinking about Aristotle with regard to “Fifty Shades of Grey,” that wildly successful book and movie tying up the time and wallets of so many people.

But, thanks to a Marquette University professor who told me a certain quote would serve me well if I heeded it well, I’ve indeed had Aristotle on the mind. And these words specifically: “The wise man does not expose himself needlessly to danger, since there are few things for which he cares sufficiently; but he is willing, in great crises, to give even his life, knowing that under certain conditions, it is not worthwhile to live.”

I am not a Greek scholar, but I am reasonably certain Aristotle meant exposing oneself to danger should be reserved for the most critical of situations, such as fighting for the lives or freedom of one’s family, friends or fellow citizens. Or for things that can help make people free, such as the right to vote, or the right to an education. But perhaps not for submitting to those who would seek to control one’s spirit and body through means many would call abuse.

Before any of you tell me that people must retain the freedom to engage in the types of sexual fantasy, bondage and domination portrayed in “Fifty Shades of Grey,” I’ll tell you that you are right. While such activities don’t do it for lot of people, the freedom for consenting adults to express themselves sexually is an important one. Many of us may not want to be trussed in iron chains, but we also don’t want to go back to the days of lying still in a modest starched crinoline while thinking of England.

The problem I have with what’s depicted in “Fifty Shades of Grey” isn’t just with the acts themselves, even if they are performed in posh, silken surroundings that few could afford to replicate, much less imagine. My issues cover some of those discussed by others, including the matters of full and informed consent and trust.

Full and informed consent and trust can be difficult patches to navigate at any age. They can be especially tricky for people as young, impressionable and developing as those who make up a large portion of the book and film’s fans. The recent spotlight on college campus rape has finally brought many academic and law enforcement professionals together to promote the idea that “no means no and yes means yes” with regard to sexual activity.

But consenting to what one might consider “ordinary” sexual activity may be one thing. Consenting to serious acts of bondage and domination may be quite another entirely. Especially if one doesn’t yet know oneself well enough to fully understand the complex, and yes, dangerous issues that can be present in bondage and domination. Or if one doesn’t know the other person and their skill levels well enough to trust that one won’t come out of the chains physically unhurt. What happens when a few whips and a little S&M becomes real, painful, quite unfashionable, black and blue violence that merits hospitalization? And no amount of silk in any color can repair a psyche torn and tattered by someone who really did want to totally mess with your mind just because they felt they could do so.

In a world where rape remains an enormous menace, where stories of domestic violence among professional athletes and their partners are common, where people are ostracized and even killed for wanting to be with someone of a different ethnicity or race, or of the same sex, or for wanting to live openly as their true gender, it’s hard for a lot of us to become enthralled with the idea of making fashionable that which can easily become something quite dangerous. Something that, in the wrong hands and wrong minds, can be anything but a less conventional form of sexual expression.

The lure of danger is all too human

Which brings me back to the matter of danger. Despite Aristotle’s words, we know all too well that humans have been attracted to danger ever since Eve decided to trust the serpent. Only in recent years have we realized that many of the dangers which have lured us through the centuries often produce much more misery than pleasure. When we see alcoholics in films these days, they are seldom a jolly lot. Those who smoke cigarettes are almost never as attractive as the people we saw in old L&M ads or on episodes of “Mad Men.”

So in a universe full of quite real troubles, I’d like to say we should choose our dangers as well as our pleasures very carefully. Not heedlessly. Not without serious consideration.

And certainly not because someone puts some silky grey shades on something and calls it harmless, fashionable fantasy.

Thinking of Aristotle upon seeing ‘Fifty Shades of Grey’