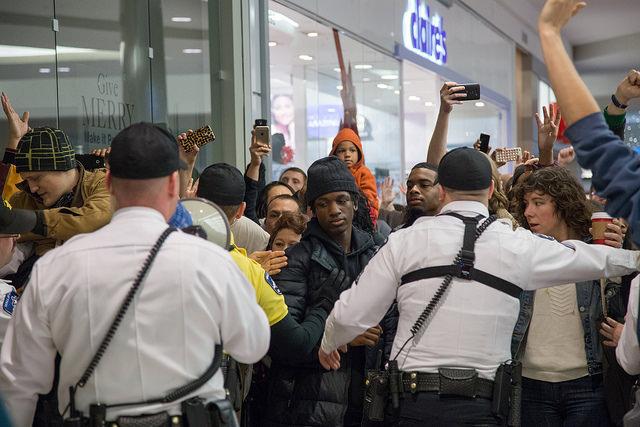 CC/Flickr/Nicholas Upton
MOA and the Bloomington police’s hypervigilant response was not a matter of “overpreparing for potential problems” as Busse asserts, but was grounded in racialized fear and stereotyping.

Admittedly, after reading the recent article by Tim Busse entitled “Media coverage of Black Lives Matter arrests at MOA hasn’t reflected complexity of the issues,” I had to take a moment to breathe. The article came across to me — one of the people being unjustly prosecuted by the city of Bloomington — as a parent scolding children who had been disobedient. Words like “belligerent,” “offensive” and “defiant” were used to describe those who participated in the Dec. 20, 2014, Black Lives Matter demonstration at the Mall of America (MOA). The condescending tone of Busse’s article and the attempts to minimize the heavy-handed conduct of MOA, City Attorney Sandra Johnson, and the Bloomington police symbolize everything that is wrong with the way in which the actors in question responded to the peaceful demonstration as well as their subsequent actions. 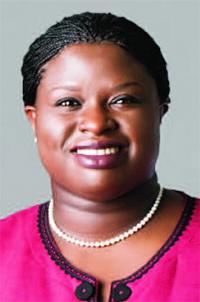 First, Busse’s use of the term belligerent is much more fitting to describe the actions of the Bloomington Police Department than those of protesters who have spoken to the media. According to Merriam-Webster.com, the definition of belligerent is: 1) waging war; specifically : belonging to or recognized as a state at war and protected by and subject to the laws of war; 2) : inclined to or exhibiting assertiveness, hostility, or combativeness. Many of the 3,000 or so peaceful demonstrators at MOA can attest to the fact that we were met by dozens of officers in riot gear, who had the appearance of a militarized police force. The presence of those officers was intimidating and scary, but — most important — unnecessary. Stories have surfaced in the aftermath of the demonstration involving the use of aggressive tactics by officers in arresting peaceful protesters; trapping people in portions of the mall; and pushing children and families outside without their coats.

Police knew it would be peaceful

Second, one must ask the question: Why would MOA see the need to employ dozens of officers and extra security forces for a demonstration that it knew in advance would be peaceful? Evidence has shown that police informants infiltrated a training session prior to the demonstration and even the FBI was involved in this clandestine operation. Given the heightened level of surveillance that was conducted, as well as the communications between Black Lives Matter police liaisons and the Bloomington Police Department, they knew full well that the event would be peaceful. MOA and the Bloomington police’s hypervigilant response was not a matter of “overpreparing for potential problems” as Busse asserts, but was grounded in racialized fear and stereotyping.

Sadly, this is not the first time that MOA and Bloomington police have engaged in racial profiling of people of color. National Public Radio and Minnesota Public Radio have documented MOA’s extensive history of targeting and profiling people of color; including individuals who appear to be foreign-born.

Busse makes the point that this is not about making prosecutor Sandra Johnson the villain. I agree. Unfortunately, though, Johnson has placed herself in the unenviable position of pursuing an agenda of politically prosecuting 11 alleged organizers, and over 20 people who were arrested at the demonstration, in order to protect the interests of MOA, as secret emails have shown. In spite of making claims that her hands are tied, the reality is that Johnson is the one individual within the system who has a source of power called prosecutorial discretion. Prosecutorial discretion gives prosecutors wide latitude in making decisions about which cases they will prosecute or decline, in light of such factors as what is in the interests of justice, and the amount of time and resources that will be expended. Although pursuit of these cases amounts to a misuse of prosecutorial discretion and a waste of judicial resources and taxpayer dollars, Johnson has made statements in the media about wanting to “make an example” out of the organizers. Part of making an example of alleged organizers includes the unprecedented move of seeking upwards of $40,000 in restitution for the costs of officers and security guards. This is unconscionable and unwarranted. Prosecutors should be guided by a sense of justice and not retaliation.

Peaceful assembly should be permitted

Given MOA’s reputation for welcoming certain types of visitors and responding harshly to others, it is important that a process be established going forward that allows for groups to apply for permits to be able to peaceably assemble in the rotunda. The fact that MOA has received more than $400 million in tax subsidies means that in fairness, there should be some responsibility placed on the mall to engage in equitable practices and to be viewed more as a public square than a private entity. If MOA wants to continue to claim it is private, then our state coffers should be off limits to the corporate giant.

Issues resulting from the #BlackLivesMatter protest at MOA are not complex