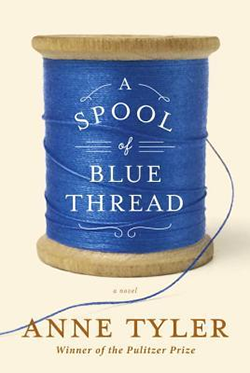 It occurred to me the other day that I may have learned more about how American families really work by being addicted to novelist Anne Tyler than by pouring over anything written by social scientists. This should not be interpreted as any kind of slam at sociologists, psychologists and political scientists, many of whom are brilliantly insightful, but as recognition of the power of great storytelling.

If you’re not familiar with Anne Tyler, she’s a Minneapolis-born, Baltimore-based, Pulitzer Prize-winning writer whose 20th book was just released: “A Spool of Blue Thread.” I first started reading her in the early 1980s, when I was free again to read fiction after finishing graduate school, not that I had read that much fiction before graduate school.

Just prior to finding Tyler, I had been reading a lot of Saul Bellow, Phillip Roth and Bernard Malamud until realizing I was spending too much time with Jewish writers (all guys) who, magnificent as they all were, routinely were preoccupied with matters of religion. Especially given that my dissertation also had dealt extensively with religion, I needed a change of pace. I don’t recall how I came upon Tyler’s “Dinner at the Homesick Restaurant,” but it was a revelation, and not just because it had little if anything to do with religion, but also because it had little if anything to do with race or ethnicity either, two of the dissertation’s other struts, which dealt with affirmative action in higher education. But Tyler and her book were terrific mainly because never had I read anyone who wrote so compellingly about quirky and slightly off-kilter families. Or, if you will, frequently “kinky” families, though not in the sense that Roth, in particular, might have portrayed the term.

In the nearly 35 years since I first found Tyler, I’m guessing I’ve read 15 or more of her novels, all of which are set, if I recall correctly, in Baltimore, usually in unexceptional middle-class neighborhoods. I especially recall “The Accidental Tourist,” whose opening pages are the most evocative I’ve ever read about a home emptied by divorce. Much more fun I (not that it sounds that way in relaying it) is an early page in “A Spool of Blue Thread” when an agitated husband tells his agitated wife, “Sometimes I rue and deplore the day I married a social worker.” (Have I ever mentioned how I adore former social workers?)

I’ve written quite a bit about families, especially problems associated with family fragmentation over the last few decades. In citing the personal and other costs of massive breakdown, I would like to think I’ve avoided conceiving marriage and families in impossibly romanticized ways. Glorious as the entwined institutions can be, my envisioned North Stars in such matters have been Tyler characters who, even when off-beat, usually hang in with impressive fidelity. At least that’s the appealing way I’ve read them.

All this is another way of acknowledging that while fiction may not be more accurate than the kinds of facts unearthed and reported by social scientists, it can be much more substantial. Might this be read as an endorsement of the liberal arts in an age of business majors? Yes, absolutely, but only if literature and other subjects are taught in reasonably traditional ways, uncorrupted by “post-modernistic,” “deconstructionist” and similarly dispiriting, P.C. nonsense.

What do I mean by all this fine jargon? Here’s how the scarily prolific Steve Hayward put in a recent National Review cover story (February 23) about “the grievance university.” In most political science, history, English, anthropology, psychology, philosophy, and sociology departments, he writes, “you will find several professors whose main focus is the holy trinity of race, class, and gender [trust me, I use these terms differently than they do], along with their close correlates, post-colonialist, postmodern, and post-structural analysis.” He goes on: “If ‘holy trinity’ seems like an infelicitous metaphor, you could go with the Four Horsemen of the Leftist Apocalypse instead: patriarchy, colonialism, privilege, and Israel.”

Academic scourges like these were (carefully) challenged in an essay in the Chronicle of Higher Education by a University of Chicago literature professor in the immediate aftermath of 9/11. I think about the piece still, as fathoming the distorted ideas it fairly lamented remains impossible.

Two months after September 11, 2001, professor Lisa Ruddick wrote a thoughtful essay on the difficulty she and her colleagues faced in bridging what she described as a “chasm.” By chasm, she meant the gulf between her academic field’s inability to nourish students versus the heighted need of students to “sustain a humane connection” to a world that was “overwhelming” them because of the terror attacks. For years, she acknowledged, literary scholarship had been running away from, not searching for humane connections.

Of all academic fields, one would imagine literature would reign at or near the top in concerning itself with person-to-person ties. One would imagine that those who shape the discipline would take it as gospel that a fundamental point and blessing of great books, plays and poetry is that they help mortals better understand what is most human about the human condition, with humanity universally defined. But as Ruddick wrote, that was not the way the field had come to be conceived by keepers of its professional norms. She told of earlier writing an article but never submitting it for publication as she was afraid of being attacked by colleagues for the high crime of “essentializing.” Translated, for daring to suppose that there are “shared features that constitute the essence of being human.”

The very phrase “What sustains people?” Ruddick said, might provoke questions such as, “Which people are you presuming to speak for?” And, “Is everyone sustained by the same things?” These are crucial questions, she agreed, “but they tend to be framed as accusations rather than as prompts to a real exchange.” And what if a scholar dared to presume incorrectly? His or her viewpoint, Riddick noted, could be dismissed (get ready for this) as having “something in common with ideas widely held on the political right.”

Scholars held in contempt for the felonious violation of what? Intellectually sidling up to an occasional Republican?

Please keep in mind I haven’t made any of this up. Not a drop is fiction.

Which returns us to Anne Tyler and her sustaining, nourishing and exquisite fiction. I presume she’s never been complimented this way before, and I do hope she welcomes it. But among all the essential essentializers I know, she’s my favorite.

Mitch Pearlstein is founder and president of Center of the American Experiment.