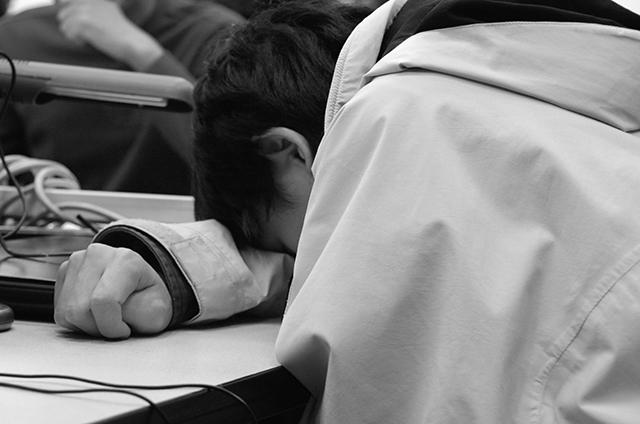 CC/Flickr/nigelpepper
A disproportionate number of students who are homeless fall behind their peers early in their school careers — and stay behind as the years go on.

Imagine this:  You need to get through a difficult assignment complicated by the use of words you just don’t understand. You’re in unfamiliar surroundings, the third office you’ve worked in since September. And you aren’t sure if you will have another meal until tomorrow’s breakfast — or even where you will sleep tonight. How well will you do on the assignment?

Now, imagine you’re a 9-year-old sitting in a third-grade classroom facing those same challenges. How well will you do? Probably not well. Most children who haven’t learned to read at grade level by third grade will struggle to succeed during the rest of their school years. And a disproportionate number who are homeless fall behind their peers early in their school careers — and stay behind as the years go on.

Ann Masten, Regents professor at the University of Minnesota and nationally known expert on child development, has found that students identified as homeless and highly mobile by the Minneapolis School District score significantly lower on nationally standardized tests of learning over time than children in families with incomes below 130 percent of the poverty line who were never so identified. While children in poverty and those who are homeless both score much lower than more advantaged students, homelessness itself carries an even higher risk than poverty.

Yet this is the reality for as many as 13,000 homeless and highly mobile K-12 students throughout Minnesota. They are in and out of different schools several times a year, making it hard for them to stay current with their studies and disrupting the progress of their new classmates.

If Minnesota’s economy is to expand in the coming years, every worker must be more productive. The Minnesota Demographic Center projects that between 2020 and 2025, the state’s labor force will grow by only one-tenth of 1 percent. These thousands of at-risk students are our future, and Minnesota can’t afford to leave them behind. And the challenge is growing:  the number of people in homeless families with children increased by 10 percent from 2010 through 2014.

This year, when the legislature is focusing so much time and effort on education, addressing the challenge of homeless and highly mobile students is critical. Three private and public actions can promote Minnesota’s future prosperity.

First, Minnesota’s philanthropic community must be part of the solution. Some of the state’s most recognized foundations and intermediaries have come together as the Heading Home Minnesota Funders Collaborative. By marshaling resources and aligning investments, collaborative members can be the laboratories for innovation, the vehicle for building broader public understanding and support for ending homelessness, and a strategic partner to public initiatives.

Second, to be a leader in education success, Minnesota needs to continue to be an innovator of policies that promote stable housing. The state is on the right track with the Dayton administration’s creation of an Interagency Council on Homelessness – commissioners of 11 state agencies who together develop and implement strategies that promote and create stable housing for all Minnesotans.

Gov. Mark Dayton and the Minnesota Legislature have provided significant funds for housing development in recent years. To be successful in housing, however, people need both a place to live and sufficient income to pay the rent. Many Minnesotans raising children are in low-wage jobs and cannot support ever-rising rents in Minnesota’s competitive market. The governor’s budget for the next biennium, while providing some funding to address housing and services for people who are homeless because of underlying mental illness, does not increase the Housing Trust Fund, which funds rent subsidies for a broad population, including families with children.

Third, funding for early childhood education should be both robust and accountable. Thanks to groups like MinneMinds and Minnesota Reading Corps, we know what works in early childhood education. We in the Funders Collaborative are especially concerned about the youngest children who are not sufficiently prepared for kindergarten because the majority of families experiencing homelessness are very young moms with very young children. As the governor and legislature shape new investments in early childhood, we hope they will focus on these children.

Leaders from all sectors have rallied behind investing in Minnesota’s future with quality education, starting in early childhood. Similarly, we have joined with the public sector to provide joint leadership on housing – the foundation for good health, a strong workforce and the quality education all our children need. We know that targeted investments can replace the revolving door of housing instability with the front door to a home. Our children — and our future — deserve no less.