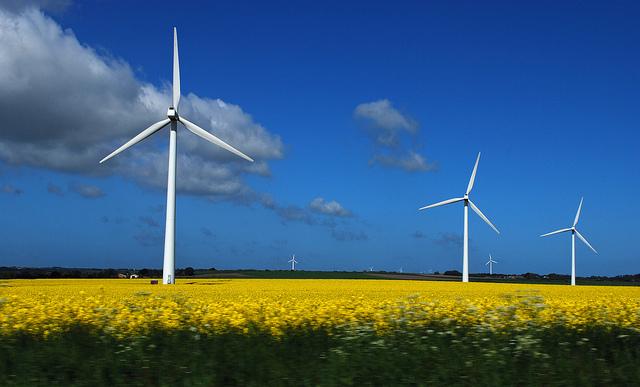 CC/Flickr/Blue Square Thing
Clean energy has entered the mainstream, and is increasingly becoming intelligent capital investment for many corporations.

Markets are making it clear that clean energy is good for business and is smart public policy. Earlier this year, 3M made a commitment to set quantitative goals for sourcing and/or production of renewable energy. This proactive, financially sound approach will reduce 3M’s greenhouse gas emissions as well as the company’s exposure to volatile energy prices. In Minnesota, 3M joins some of the state’s largest companies in committing to clean energy. With the private sector leading, will policymakers follow? Now is the time for Minnesota lawmakers to increase the state’s commitment to clean energy by setting a new 40 percent target for renewable energy and increasing energy savings to 2 percent annually.

Clean energy has entered the mainstream, and is increasingly becoming intelligent capital investment for many corporations. That’s why Trillium Asset Management worked with 3M through the shareholder proposal process to encourage the company to make quantitative clean energy goals. As investors, our interest in corporate clean energy adoption is not only environmentally altruistic — it’s a way to boost corporate profitability while addressing the risks of climate change. Among the largest Fortune 100 companies, 60 percent have these goals and are saving a combined $1.1 billion in energy costs annually through their efforts.

Companies and their investors recognize the risks climate change poses to their infrastructure, supply chains, employees, and customers. Twelve companies in the state, including General Mills, Andersen Windows, Aveda, and Spirit Mountain, have joined more than 1,250 companies worldwide in signing the Climate Declaration, which states, “Tackling climate change is one of the greatest economic opportunities of the 21st century.”

In Minnesota, the renewable energy standard (RES) of 25 percent renewable energy by 2025 has been hugely successful and many utilities are already meeting or exceeding this goal — some 10 years ahead of schedule. These types of policies create certainty for companies and investors looking to plan for the future, mitigate the risks of climate change, and lock in fixed energy prices. The Minnesota Department of Economic Development found that the state’s current policies and programs have stimulated growth across the clean energy sector, resulting in high-paying jobs, reduced dependence on imported energy sources, and increased investments.

Now, the Minnesota Legislature has an opportunity to consider expanding the RES from 25 percent to 40 percent by 2030. This is an ambitious goal that will continue to drive companies, investors and jobs in the state. In 2014 there were more than 15,000 clean-energy jobs in Minnesota and more than $5.6 billion in capital investment. A recent study by the state’s Department of Commerce finds that a 40 percent renewable energy standard is achievable and will not result in electrical grid reliability issues.

Supportive clean energy policies help create a market for clean energy and are a key component in facilitating corporate adoption of renewable energy.

In Minnesota, 3M is not alone. Ecolab recently decided to purchase enough solar energy to power 90 percent of its Minnesota operations. It made the decision because it makes business sense and allows the company to lock in a fixed energy price for 25 years. Andersen Windows, which is based in Bayport, Minnesota, also recently signed the Climate Declaration and announced commitments to cut energy use by 20 percent.

It is time for state lawmakers to continue leading on climate change legislation, invest in a low carbon economy, and create policy certainty for companies and investors working to achieve their own clean energy goals. Minnesota companies are already leading the way with clean energy commitments and new clean energy policies will continue to attract corporate leaders to the North Star State.

Brianna Murphy is vice president for shareholder advocacy at Trillium Asset Management, an investment firm with $2.2 billion in assets under management. Trillium is a member of the Investor Network on Climate Risk.