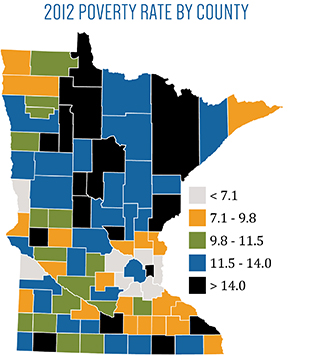 Courtesy of Growth & Justice
This map of poverty rates by county is one of several in the report “Widening Inequality in Minnesota: A County-by-County Analysis.’’ The maps show how economic inequality and distress worsened between 1999 and 2012 in the urban core and in rural counties, while the suburban-exurban ring enjoys relatively even affluence.

Recent articles by MinnPost are establishing with increasing clarity how the underachieving 2015 Legislature has short-changed both rural Minnesota and the Twin Cities urban core.

Citing leading rural advocates, Briana Bierschbach’s recent analysis summarized failures to respond to a long list of public investment needs in transportation, broadband and high-speed Internet service, railroad safety, local government aid and work-force training. Other articles are revealing how low-income communities of color in our urban core were ill served, and are, for instance, paying a “transit time penalty’’ from ongoing neglect of mass-transit infrastructure.

Here’s some important and timely context showing why these outcomes matter, from a report by Tom Legg, recently retired from the finance faculty at the University of Minnesota’s Carlson School of Management, and Ngoc (Jenny) Nguyen, a U of M graduate student in applied economics. Their report, published recently by Growth & Justice, provides maps and fresh documentation that help illustrate for policy-makers exactly why they must bring more equity to both the urban core and Greater Minnesota.

“Widening Inequality in Minnesota: A County-by-County Analysis’’ provides a sweeping view of worsening inequality in rural and urban counties by comparing median income, poverty rates and gini coefficients (a measurement of inequality) between 1999 and 2012, a period that included two damaging recessions.

Relatively even prosperity in suburban/exurban ring

This research challenges the notion that the inequality divide in Minnesota is essentially between one monolithic Twin Cities metropolitan area and one big Greater Minnesota. Rather, the disparity is better understood as a chasm between a relatively even prosperity in the suburban/exurban ring, and the more distressed spaces within and outside that ring.

This statement in the report’s introduction dramatizes just one statistical measure of that gap: “The highest median incomes are in the counties that comprise the exurban and suburban ring around the Twin Cities metropolitan area. No Minnesota counties inside or outside that ring have a median income as high as the median income in the poorest suburban county.’’

This widening regional inequality is perhaps not surprising to experts and students of geography, demography and economics in Minnesota and the United States.

Most of us have known for some time, at least since President Lyndon B. Johnson kicked off the “War on Poverty’’ in the 1960s by visiting rural whites in Appalachia, that poverty tends to have an urban and a rural face, while suburban and exurban counties remain islands of relatively even prosperity.

The report shows, however, that even the suburban areas in Minnesota suffered during the last decade and a half, as two large recessions rocked our nation and state, and as income and wealth grew disproportionately at the very top, for the 1 percent in particular.

Here are some of the more significant details in the report that illustrate the importance of place as inequality worsened in Minnesota between 1999 and 2012.

To be sure, we can find nuance and complexity behind those numbers. The cost of living in rural areas, for instance, is lower, especially for housing and real estate, and lessens the inequality. A few rural counties are doing better in recent years and larger regional centers in Greater Minnesota are holding their own. Rebirth and renaissance in the inner cities has resulted in population growth for the first time in decades. And there are plenty of reasons for hope and confidence in the resilience of the people and communities in both our urban core and Greater Minnesota.

Further neglect, however, and leaving these inequalities entirely to market forces, is not a proven recipe for success. Bipartisan consensus runs strong for smart public investment in education and work-force readiness, infrastructure of all kinds, affordable health care for all our residents, and a cleaner and greener economy.

A lot of money left on the table

The bad news is that the 2015 Legislature left an enormous amount of money and unfinished business for urban and rural Minnesota on the table.

The good news is that the money is still on the table. As legislators and decision-makers prepare to reconvene for a special session on the education-funding bill, and as they continue to negotiate for a transportation package and tax policy for the 2016 session, they must be especially attentive to the investment potential and economic security of both rural Minnesota and the urban core. All of Minnesota, including the prosperous and interconnected suburban/exurban ring, will do better, when we all do better.

Dane Smith is the president of Growth & Justice, a research and policy organization that seeks a broader prosperity for Minnesota.