Why is it that mentioning Vietnam to people of a certain age often incites a knee-jerk response such as “Don’t they hate us?” or “Why would you want to go there?” as if the country were caught in a time warp, forever recycling 1975? Coming of age in the ’70s means that I do have images of the Vietnam War seared into my brain, but I have been intrigued by the country and have wanted to go there for some time. So this past March, My husband and I signed up for a two-week stint in Hanoi, teaching English for Global Volunteers.

Peter was assigned to a middle school with many classes of rambunctious sixth-graders, which suited his energy level and penchant to be the “big man on campus” perfectly. I was assigned to Blind Link, a nonprofit organization that helps blind massage therapists (the career path for most blind people in Vietnam) learn English to serve their growing western and Asian clientele. It is challenging enough to teach English as a second language to sighted people but really difficult when you can’t use any visual cues to teach. Nonetheless, I welcomed the challenge and found that I could connect with these lovely and trusting students on a level that transcended the visual barriers. 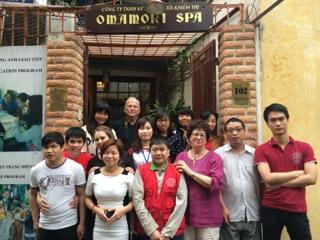 Courtesy of the author
The author with her students in Vietnam

Contrary to misperceptions still present in the United States, we found Vietnam to be a vibrant, young (more than 80 percent of today’s Vietnamese were born after 1975), energetic and very welcoming country that appears on brink of transforming itself into a serious economic power. The people we met were so grateful for our presence and enthusiastic about learning English that we felt truly valued both as volunteers and as tourists.

Hanoi itself is a 1,000-year-old city with Chinese and French influences from past invasions, but it is transforming itself into a modern city with all that that entails. Most Hanoians ride motorbikes or buses rather than cars, and the flow of traffic in the city is a truly remarkable sight: Pedestrians wade out into the traffic like forging a stream with a continuous flowing motion of vehicles around them. This organic motion says much to me about how the Vietnamese seem to approach life in general: There is an attitude of letting the past go and embracing the future with a degree of optimism that I don’t see to the same degree in the States.

Not surprisingly, we saw few Americans during our stay in Vietnam; most of the tourists we encountered were Asians and Europeans and, of course, the common language was English.

Returnees after leaving in ’75

We did meet several Vietnamese-Americans who were returning to see their home country again since leaving in 1975. These were impressive people who had undergone unfathomable hardship to come to the U.S. 40 years ago and embrace the American Dream, making something of themselves through perseverance and hard work. As they said to us often: “Americans really don’t know how good they have it,” and I would certainly concur.

Vietnam looks like a country that works: The crime rate is incredibly low, the streets in Hanoi are clean and safe, a woman can feel free to walk alone late at night, children appear well-fed and loved, the garbage is collected daily, and even those with little are actively engaged in their individual enterprises. Albeit, glimpses of Big Brother and inefficiency do crop up, and there does not seem to be any major effort to clean up the air or the water.

So why don’t more Americans visit Vietnam? I think many of us of a certain age still hold baggage from a sad chapter in our history and we have a hard time moving beyond it. I think we should follow the path of our Vietnamese friends: Let it go and step into the flow.

Laura Merriam is a retired corporate executive and past board member of the Minnesota International Center.

Vietnam 40 years later — and why Americans should visit