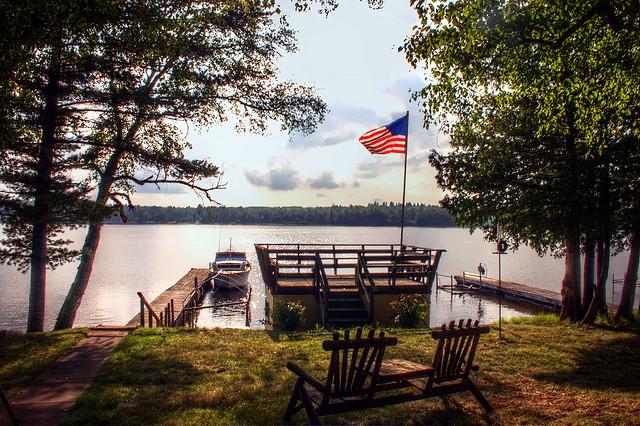 CC/Flickr/Russell Harrison Photography
On one hand, it’s odd we memorialize the dead in the spring when the world comes alive.

Call it aromatherapy for the northland: Lilacs are the natural perfume of spring.

Not that I was thinking about lilacs last weekend when my husband and I surveyed the overwhelming array (disarray?) of yard and beach work needing immediate attention at our lake place. As is characteristic for the two of us, my reaction was that the natural world had conspired to stress me out (think screaming and gnashing teeth); he wondered whether we should go fishing before the rain set in.

It wasn’t until late in the afternoon on my way from yard to dock to do some chore or another that I caught the scent of lilacs — faint, to be sure, but aromatic enough for me to stop, turn, and push my face into fragrant lavender blossoms yet on the branches. All the tasks I absolutely had to do or should be doing or could not possibly get done moved to the back seat of my brain, replaced by the heady realization that lilacs had begun to bloom and would be in full bloom for Memorial Day.

All must be right with the world.

Whatever else we know about the changing seasons, living where we do encourages love of lilacs … and rhubarb, too, of course.  If lilacs are the northland’s spring perfume, rhubarb is its first fruit. More important, if we have a bouquet of lilacs on the table and rhubarb pie for dessert on Memorial Day, the stage is set for a fine summer. It’s all a matter of timing. When lilacs bloom before Memorial Day, we’re uneasy; if they bloom after, we’re also uneasy.  (Rhubarb is not such a slave to timing.)

The rain began by evening and was settled in early the next morning when I drove into town for church. By then my desperation to get things done had pretty much disappeared, almost as if I’d worn it outside in the long spring rain and it had dissolved. In its place was steady rhythm, the rhythm of raindrops and wiper blades. Instead of seasonal angst from the day before — specters of work shouting to be done here, there, and everywhere — the low-ceilinged natural world held consolation. Through no effort of my own, my mind had shifted from the burden of all that must be done to the balm of all there is to appreciate.

Nobody else was on the road. Although the sun was hidden, seemingly powerless to overcome the rain, the color green was everywhere. But it wasn’t spring green that dazzles, trumpeting itself under blue skies and in brilliant beams of light.  This green glowed — canopied fuzziness on trees and velvet haziness on fields — a surround of blurred and boundless luminescence.

I come from practical rather than spiritual people, people disinclined to talk about philosophy or religion, at least in personal terms. And love, as I learned about it, was a verb, an action word. The point was not to say we loved one another but to show that we did. We didn’t take it to extremes, of course. No way was I about to do dishes alone to show my brothers I loved them. But our mom certainly baked it into rhubarb pies, and our dad into gratitude and joy for nature.

On one hand, it’s odd we memorialize the dead in the spring when the world comes alive. Of course, our Memorial Day grew out of Decoration Day, which was instituted to honor Civil War dead by putting flowers on their graves. Memorial Day expanded the idea to honor all who died in military service. In practice, however, Memorial Day also is the day to remember family and friends who are dead. The philosopher Rainer Maria Rilke said that death “brings us into absolute and passionate presence with all that is here, that is natural, that is love.”

And so we pause to see spring green around us, to smell the lilacs, and to taste the rhubarb.

A weekend for rhubarb, lilacs and honoring our war dead