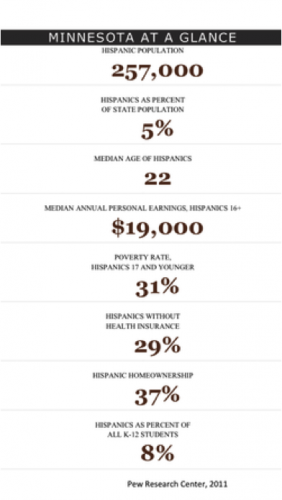 In this commentary I’d like to explore trends regarding Latinos and education in Minnesota, based on different points of data and personal experience, and share a few suggestions for how we can reduce disparities and better serve our growing community of Latino students.

In Minnesota, the growth of the Latino community has been especially noticeable in the last two decades. Between the 1990s and 2000s, it grew by more than a 100 percent. In the last decade alone, Latinos grew 75 percent, compared to 7.8 percent growth in the overall state population. An updated 2002 U.S. Census report estimated the Latino population to be 158,752 and 257,000 in 2010, making the Latino community 5 percent of the state’s population (Pew Research Center, 2011).

According to the Minnesota Humanities Center and Chicano Latino Affairs Council (2010), projections for growth will continue; by 2030, Latinos are expected to reach 492,000 (a 182 percent increase between 2010 and 2030).

Today, a Latino student might go through the school system without ever having met a teacher who shares her culture or speaks her dad’s native tongue, especially if she lives outside the metro area (most teachers of color work within the metro area and in 2012, Latino teachers made .11 percent of teachers statewide (Minnesota Department of Education, 2013, PDF), a .4 increase since 2007 (Minnesota 2020). At third grade, her reading is more likely to measure as not proficient, and in eighth-grade math, you can tell the same story (34.9 percent of Latino students read proficiently by third grade and 49.7 percent are proficient in math by eithth grade; 66.6 percent of white third-grade students read proficiently and 68.1 percent are proficient in math by eighth grade) (MDE, 2015). I, for example, never had a professor who identified as Latino during college. In high school, the Latina teacher I had was in the English Learner program — a trend you see everywhere: Bilingual teachers are often working only with students learning English or Spanish. 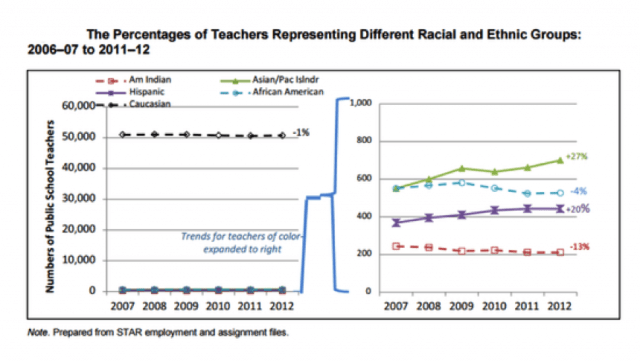 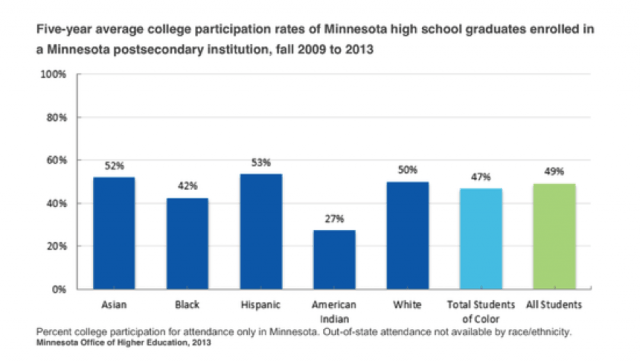 Where are we headed?

Over a cliff. In Minnesota, when it comes to education for Latinos, and you squeeze us all into data statistics, long-time trends are slightly improving but continue to fail many of our students. Minnesota is a great state, but our racial disparities are persistent. In addition, demographic shifts will push Minnesota off the cliff if current trends do not change. We have talked about this for many years now — retirement rate, more jobs than workers, health-care needs, the failing of students in the only communities growing, fewer college degrees earned, etc., are some of the reasons we must be alarmed and acting for change. Now. (We should just care for all students so everyone can have a decent quality of life; but for those who need economic reasons, it is time to freak out — we cannot afford to not do more. This needs to be treated with urgency. Period.)

What do we do? Education is complex. We cannot stay stuck, however. Below are some ideas I have found that could help us ramp up learning for students. A recent study looked at different programs that have closed educational attainment for Latino students in different communities around Minnesota. These are themes that point out what can work for Latino students across the state. From CLAC & HACER, 2012:

• Building strong relationships between staff and students and providing individual attention to each student;
• Fostering motivation in students by helping them identify and achieve their own goals, and offering encouragement;
• Providing exposure to career and higher education opportunities;
• Creating an environment of high expectations, academic rigor, and promoting upper level academic opportunities;
• Ensuring a welcoming and respectful school environment;
• Recognizing and placing value on students’ cultural identities and needs;
• Encouraging family involvement by building mutually respectful relationships and addressing the needs of parents and families;
• Utilizing partnerships, collaboration, and community involvement to engage students.

According to Minnesota Compass, “While the root causes of disparities lie in historical experiences of oppression and exclusion, many gaps illustrated by current data can be explained by insufficient income, unhealthy environments, and inadequate access to opportunities.”

Cradle-to-career efforts in Minneapolis are another great tool.

Generation Next’s goals for the metro area seem to be helpful, too:

Goal 1: Each child enters kindergarten with the literacy, social and emotional strengths needed for successful learning.

Goal 2: By end of 3rd grade, each student meets key benchmarks for success in reading and reading comprehension.

Goal 3: By end of 8th grade, each student is on track to meet benchmarks for success in math.

Goal 4: Each student graduates from high school ready for college and career.

I also think teacher programs must change. I went to college to become a teacher, but dropped out of the program. We have all heard the horror stories by students going through these programs, and surveys have shown that teachers often do not feel well equipped to teach in the classroom. We need more teachers of color. Teachers need more incentives than just making a difference in a child’s life.

The demands on a teacher are astronomical, too; I do think teachers are super s/heroes, but they are also human beings and instead of getting more people into classrooms, the current system seems to be a meat grinding where the few survive or feel they have a say in their work. I also think the profession has changed. Today, we expect teachers to be teachers for the rest of their lives like many of our older teachers, but I do not think that is what younger people want. We move jobs and want to have different professional experiences. When you are a teacher, there are little outlets to do something else and people often feel their skills are not appreciated outside the classroom (people who do not teach are often wrong about their perceptions of what teachers do).

Also, if we want to accelerate learning for all students, more attention needs to be given to each student. This also means that the job to educate a kid is everybody’s job; learning happens outside of the classroom too. YouthPrise is doing great work to ensure that all kids have high quality out-of-school learning opportunities in Minnesota.

We also have to think about how we localize efforts to better support students who represent different demographics based on income, immigration status, age, language proficiency, gender, and the list goes on. For example, the Minnesota Dream/Prosperity Act passed in 2013 and the ELL bill in 2014 will continue to make a big difference for many students.

The politics around education are so toxic that it often feels you cannot have a conversation with anyone about anything. It has become about adults and their camps instead of it being about students. We need to come to terms with the fact that our Minnesota is dramatically changing and must invest more in giving everyone a high quality of life.

There is no such thing as a “superpolicy” that will address educational and other disparities. We must start seeing each student as an asset, give her the attention she deserves, change unjust systems that go beyond the classroom, and make educating all of our students possible — because it is possible. And it is up to us.

Juventino Meza, a graduate of Augsburg College, is a founding member of NAVIGATE MN. He was the 2013 recipient of the Ohtli Award, the Mexican government’s highest recognition for a civilian Mexican living outside Mexico, and recipient of the 2013 Immigrant of Distinction Award from the Minnesota/Dakotas Chapter of the American Immigration Lawyers Association.

Latino education gap: some ideas for closing it — and thereby improving Minnesota’s future