The Muslim holy month of Ramadan started last week. This fasting month will be observed by millions of Muslims around the world, unless you are in China, where anti-fasting cops resort to force feeding observing Muslims in public. The number of hours that Muslims must fast will vary based on where they live. In a country in the northern hemisphere, like Denmark, there are a whopping 22 hours of fasting time; I fear there will be some very angry Muslims over there. However, in the Southern Hemisphere, Argentina has the shortest fasting day, with only 10 hours. Here in Minnesota there are 17 hours to endure and summer temperatures often reach 90 degrees Fahrenheit.

So, how do Muslims face, endure, and yes, even enjoy, this month of fasting in the United States? While Muslims fast during the day, they compensate by eating through the night, just the opposite of what the rest of the country is doing. The hardest part about fasting in America is that you find yourself fasting in a country where eating is a form of entertainment, where meals, coffee breaks and snacks never seem to cease.  Some Middle Eastern restaurants here will set up outdoor tents where hungry Muslims and their families will come to break their fast at sunset. Families and friends gather under the giant white tent to break their fast and celebrate the holy month together in a magical communal evening.

Muslims are often asked questions about their faith and practices, and we explain that fasting Ramadan is one of the requirements of the five pillars of Islam. The other four are belief in one God and the finality of the prophet or “Shahadah,” pilgrimage to Mecca or Haj, Almsgiving or “Zakah,” and praying five times daily. Allah (God) says, “Fasting is mine and it is I who give reward for it. [A man] gives up his sexual passion, his food and his drink for my sake.”

In fact, most Muslims will observe fasting even if they aren’t keen to follow all the pillars. However, not all Muslims fast, and there are legitimate and creative ways to avoid fasting. A few years back during Ramadan, I was having a lunch in an American restaurant, and the Muslim waiter brought my green salad with a few bits of bacon on top. I looked at him and exclaimed, “Man, you know Muslims don’t eat bacon! “Muslims don’t have lunch in Ramadan either,” he fired back.

During a Ramadan with high heat, some Muslims will find creative ways of avoiding fasting, like traveling (at least 80 miles on a mule, but nobody has tried this recently), bringing their old medical records to their doctors for permission not to fast, or just simply not fasting at all. Islam doesn’t required children to fast until reaching adolescence, Al-Kharqi said: “When a child is ten years old and is able to fast, he should start to do so.” But fasting at earlier ages gives Muslim children some sense of growing up, like a rite of passage, and kids want to emulate their older brothers and sisters. Some strict Muslims parents will demand of their youngsters to fast for at least a short time as soon as they can walk. I have seen a Somali girl as young as 2 wearing hijab, so it is not too far-fetched to assume that she will be soon tinkering with fasting. 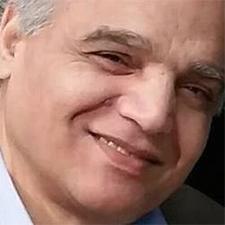 However, forcing your kids to fast is not always a virtue, and could be counterproductive. While I was growing up in Egypt, my parents were relaxed about religion. Indeed, my dad had a great contempt for zealous imams and preferred to live by example and despised preaching. In this way, my dad raised eight children and the only thing he liked about Ramadan fasting was the not eating part; “be hungry, be healthy” he always joked when we asked for food.

My mom didn’t care much either as long as she was not an accomplice. In a majority Muslim country, cheating on fasting is not a piece of cake, and it can be very tricky in a country where everyone around is fasting. At the school, the bathroom was my best place for premature fast breaking. In my village in Egypt, I was able to get by without fasting until I started going to school for the first time, where everyone watched you. There you couldn’t eat or drink in front of anyone. Nobody believed me when claimed I was Christian; everyone knew the only one Christian student in the entire school, and besides, I was the son of “Alnazzer,” the school principal.

Kids keep an eye on each other

In Ramadan, even other kids will check to make sure that you are fasting and haven’t eaten or drunk anything. “Open your mouth, show me your tongue,” they would ask you every time they met you in the hallway, and at this juncture, you had no choice but to open your mouth. Nobody will read you your Miranda rights here. Kids actually took this very seriously, and it wasn’t unusual to see a 6- or 7-year-old kid standing on the fasting checkpoint, surrounded by the whole class, sticking his tongue out. The tongue had to have a gray tinge and be not broken from drinking or eating. If the kids suspected a fasting violation, they would bring their noses as close as possible to your face and smell your mouth to make sure that you had the blessing of Ramadan bad breath.

“During Ramadan, some people experience bad breath as the salivary glands do not produce enough saliva to keep the breath fresh,” said Dr. Rana Al-Thib, General Dentist at Hibah Shata Specialized Dental Clinic, Dubai Healthcare City. Muslims usually understand and tolerate bad breath in Ramadan, and believe that it has its reward from God. As the prophet says, “The change in the breath of the mouth of him who fasts is better in Allah’s estimation than the smell of musk.” Americans may tolerate badmouthing, but won’t tolerate bad breath, and no amount of culture diversity training is going to change that. In fact, Americans spend millions of dollars every year to rid themselves of their bad breath.

During Ramadan in America, I feel out of place, and it’s hard to join in the fun. I miss the magnificent scene of the sun setting on the horizon, the anticipation of ‘Azzan,” the call for “Maghrab” (evening prayer) to break your fast, the food preparation, the sizzling smell of your favorite Ramadan dishes, the communal eating at the table, the chat, Ramadan TV series that bring families together, the walk in Cairo street at night, and most of all the “Mesahraati” who comes late at night beating his drum declaring time for your last evening meal, calling your own name chanting “Esha Ya Nayem Wahed El Dayim” — wake up sleepy-eyed and worship the everlasting.” Ramadan Kareem everyone!

Freelance writer Ahmed Tharwat is the host and producer of the public access TV program “BelAhdan.” He blogs at “Notes from America.” Follow him on Twitter.