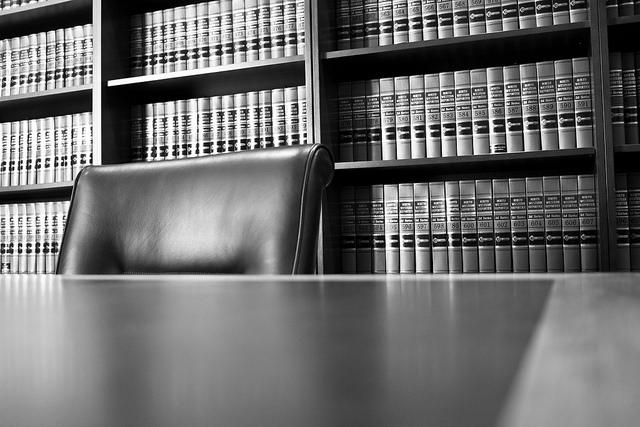 CC/Flickr/Phil Roeder
We don’t normally open the newspapers or turn on the evening news to find out what has happened in our courtrooms.

This is the fifth in a series of occasional commentaries on the judicial system from the perspective of a District Court judge.

“The quality of mercy is not strained. It droppeth as the gentle rain from heaven upon the place beneath it. It blesseth him that gives and him that takes.”

Mercy comes in many forms in our district courts. Sometimes it’s lauded, sometimes it’s decried. Most often it’s unseen — as is often the case with the good work of our district courts. Seldom is there anyone in the courtroom except those who are directly affected by the case under consideration. There’s usually no one to see the good when it happens, or the matters that touch the heart.

We don’t normally open the newspapers or turn on the evening news to find out what has happened in our courtrooms. It’s only on rare occasions that television stations have any interest in what goes on in court, and then usually when the matter is a high-profile event involving sordid sex or terrible violence. Though some other news outlets do a better job covering court proceedings, a lack of resources understandably limits what they can do, even on some matters of major public importance — the constitutionality of aggressive soliciting laws, the disclosure of police videos, the rights of the disabled to accommodation in private schools, among numerous others.

Often mundane — except to those involved

It would be presumptuous, then, to think the news media would show an interest in the important work judges quietly engage in daily. The matters are often mundane — except to the people involved. No one reasonably expects these matters to attract media attention, nor do the participants want it.

But every day the unseen work of our courts impacts people’s lives in real and important ways. Recently, a creditor appeared in my courtroom to ask that I release a tax refund from an individual’s bank account so that the creditor could seize the funds and apply them against the person’s debt. The account holder objected, but didn’t appear at the hearing. When I walked through the applicable statute with the creditor’s attorney, though, I found the funds were mostly protected from seizure. The law protects some employment earnings so that debtors can meet their basic needs — like rent and food.

The attorney wasn’t trying to do anything wrong. He had read the statute to exclude a tax refund from the definition of disposable income. I viewed it differently. Though the debtor never appeared, I found his funds were substantially protected.

‘You were a blessing’

My colleague, Judge Thomas Sipkins, helped a man who came into his courtroom sobbing because he was unable to obtain a certificate of his birth. The man wasn’t sure where he was born, or when, what his given name was upon his birth, or the identity of his parents. He felt emotionally adrift because his best efforts at finding his identity had been unsuccessful. Judge Sipkins could have told the man that he couldn’t help him — judges aren’t allowed to give legal advice. But instead he listened patiently to the man’s story, made no promises, but told the man he’d see if he could find someone to help. Then the judge took the time to find a highly qualified family lawyer who graciously assisted the man “pro bono” — for free. Sometime later, the man wrote to the judge, “You are a man of your word, and an asset to the … justice system. … I’m happy and blessed to have gotten to meet you. … I now have [the] peace of mind I’ve been looking for … for 35 years. … You were a blessing.”

What occurred in these cases is repeated every day in a variety of ways in courtrooms throughout Minnesota. The public never sees that district court judges carefully protect the rights of all citizens, when they can. In hearings on matters large and small, my colleagues on the bench bring their wisdom and experience to bear, making sure rules and statutes are properly followed, protecting rights, administering mercy, enforcing the law. We’re not expert in all aspects of the law, and it’s invaluable for judges to have the input of good lawyers on both sides of the issues. But even when a party doesn’t have a lawyer, and sometimes even when the party doesn’t appear in court, we do our best to make sure the system works as it’s designed.

Judges also quietly work to reform the system so that it may better serve the community. We’ve established problem-solving courts to help those who need treatment to obtain it rather than suffer punishment. In Hennepin County Veteran’s Court, Judge Kerry Meyer presides over a process that helps veterans who may be homeless and need services, or who suffer from stress and trauma.

One Iraq veteran assisted by Veteran’s Court had been chronically homeless. He was facing a serious felony criminal charge, had a history of domestic assault, and convictions for disorderly conduct and DWI offenses. On the surface, his plight didn’t attract sympathy, and certainly one alternative was to sentence him to traditional workhouse or prison time. But Judge Meyer and others worked with him over an 18-month period during which he obtained long-term housing, worked with a therapist to address his post-traumatic stress, completed anger management training, and finished chemical dependency treatment. As a result, he started a college program, has remained sober, and is now engaged in a long-term nonviolent relationship. He is to be given great credit for his accomplishments, but his success may not have occurred without the court initiatives that led to his resurrection.

Judge Meyer also oversees Mental Health Court, which recognizes that rotating the mentally ill through court again and again is time consuming and costly, but doesn’t help our community or solve any problems. The mentally ill often need treatment, not fines and incarceration. While our social-service and medical organizations should be working to help the mentally ill, the courts have become the place where those needing help may find needed assistance.

In DWI Court, it’s not unusual for someone to go from a seemingly hopeless alcoholic to a sober, productive citizen. The transformation is accomplished by careful oversight, which involves random home visits, rigorous court reviews, probation meetings and recovery support in the community.

Judge Bruce Peterson presides over Drug Court and also manages cases involving issues of homelessness and prostitution. He daily works with people whose problems are better treated than punished. Under Judge Peterson’s leadership, it’s not unusual for people to go from extreme depredation — living on the streets, stealing from family, child neglect — to a productive and healthy life. His job takes organizational skills, careful analysis, hard work and a caring heart — he’s well suited to the task.

Reform of the justice system is an ongoing process. Judges in Hennepin County are currently working with municipal prosecutors and police departments to set up a diversion system for certain misdemeanor crimes, like shoplifting. Sometimes people need a second chance through diversion because statistics demonstrate that diversion —not prosecution — is often the most effective way to prevent a person from reoffending.

Certainly, it takes good judgment, a good heart, and a healthy measure of common sense to be a good judge. But it also takes a lawyerly attention to detail, a careful application of the law, restraint, and the patience and resolve to try to better a system that depends on judges to render justice.

The work of our courts may never be seen by most people, not even the high profile work we do. But the unseen good work of judges is important to our community, and to the orderly function of a society based on the rule of law. The community may not be aware of all that occurs in our courts, but should be comforted by the knowledge that it is so often of a high caliber.

Mel Dickstein is a judge in Hennepin County District Court, where he handles a mix of civil and criminal cases. He is a former partner in the law firm Robins Kaplan.

The unseen good work of our courts