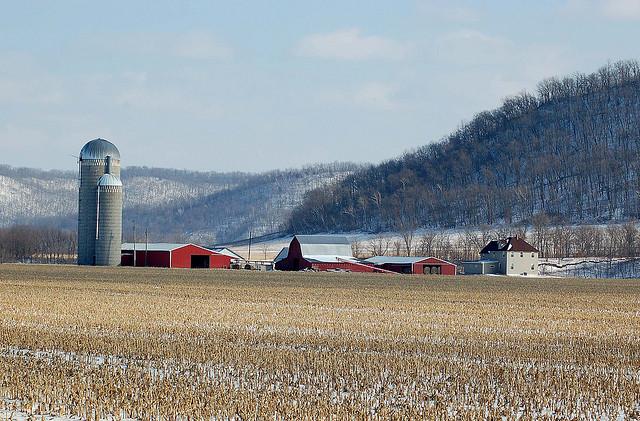 CC/Flickr/Derek Bakken
Clearly, farmers hold their wealth in land. However, the average age of farmers in our region is 55 years and climbing.

Southern Minnesota’s economy is certainly more diverse than it was when the Southern Minnesota Initiative Foundation (SMIF) was founded nearly 30 years ago. However, agriculture still plays a major role. Agriculture and forestry account for over 20 percent of our 20-country region’s economic output. 6.2 million acres — 82 percent of our region’s land — is cultivated farmland. The most impressive statistic: The estimated current value of farmland in south central and southeastern Minnesota is $50 billion. Clearly, farmers hold their wealth in land. However, the average age of farmers in our region is 55 years and climbing. It is estimated that $7 billion in wealth will transfer hands in the next 15 years in our 20-county region alone. Farmland will account for a large portion of that wealth. Yet it remains unclear who this wealth will be transferred to. For every six farmers 65 or older, there is only one under the age of 35 standing in line to replace them, according to the 2012 USDA Ag Census.

While there is a generation of people who want to farm, including a rising number of women and immigrant populations, high land prices and start-up costs force most beginning farmers to rent, or deter potential farmers from starting in the first place. Additionally, for a farmer who is living off of land homesteaded by an ancestor several generations before, it can be worrisome to imagine that land going to a distant investor with no real connection to the community. A dwindling pipeline of younger farmers paired with deep-seated emotional ties to land means succession planning is a growing concern in agriculture.

However, there is a model that allows retiring farmers the peace of mind that their land will continue to be farmed and also available for those farmers just starting off. Several years ago, our sister foundation, Southwest Initiative Foundation (SWIF), launched a farmland retention program called “Keep It GrowingSM.” The goal of this program is to offer retiring farmers and landowners an option to preserve the property as farmland while converting it to an asset that benefits the community. So far, seven farms have been bequeathed to SWIF, who in turn will continue to manage this land and re-invest the rental income into southwest Minnesota.

Another local organization, Rural Advantage, has also received donated farmland. They will turn this donation into an educational model farm that uses alternative and perennial agriculture systems to demonstrate and research how crops besides corn and soybeans can increase biodiversity, improve soil quality, and reduce farm runoff.

Building on these successful models, SMIF launched our farmland retention program, Preserving our Heritage, in 2014. Through this program, retiring farmers can bequeath some or all of their land directly to SMIF or to one of the 23 community funds we manage, allowing them to build the wealth of their individual communities. When a farmer is thinking about estate planning, it can be a comfort to know there is a way the family’s land can remain active farmland while also benefiting the local community. The farmer can choose how to allocate the income generated from the land rental to a designated/donor advised fund, a local community fund, or one of SMIF’s endowed funds.

Choosing to donate one’s land is an enormous benefit on all fronts: The landowner will receive a tax deduction and bypass capital gains while still being able to maintain a stable revenue source. The tenant can continue to rent and farm the land. The county maintains its tax base. SMIF retains ownership and acts as a steward of this resource to ensure the community benefits long-term from the income generated.

The fields that surround our towns are more than economic assets; they represent our heritage. Many farmers in our region are fifth- and sixth-generation landowners. Most families, if not farmers themselves, can easily trace their lineage back to farming ancestors. SMIF realizes the importance of preserving the land as both a cultural and economic asset.

(To learn more about how to make farmland a lasting asset for southern Minnesota, contact SMIF’s Vice President of Development Jennifer Nelson at jennifern@smifoundation.org.)