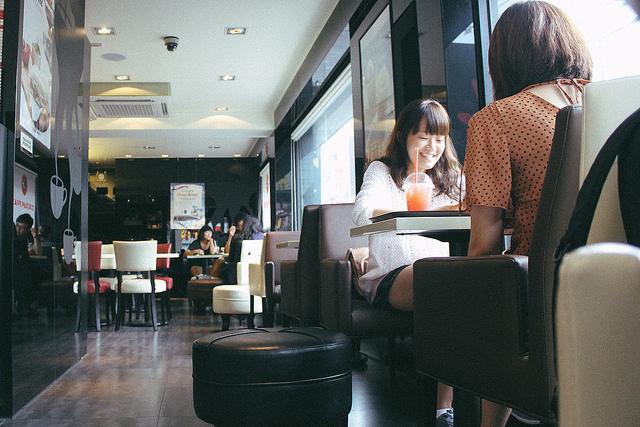 CC/Flickr/therealrealjd
My delight in anecdote awareness sprouted concomitantly with the habit of eavesdropping in public spaces.

Though nearly everyone is hardwired to appreciate quips and stories, my delight in anecdote awareness sprouted concomitantly with the habit of eavesdropping in public spaces. For instance, once in a New York City Mandarin restaurant, a man in the booth behind me regaled his lunch partner with a tale of being spurned by a woman in Las Vegas whom he later learned was Christine Jorgenson, the first person in the United States to have had sex reassigning surgery. My wife, Judith, also an inveterate eavesdropper, occasionally gathers a gem, such as the one she recounted after hearing a customer at the counter of a northern Wisconsin café tell the proprietor, “Whenever I’m feeling randy, I eat raisin toast.”

In April 1970 I met Ben Dubois in the lobby of his bank in Sauk Center, Minnesota. He was 84 then, the retired founder of the Independent Bankers Association, an organization made up of the nation’s small-town bankers. Ben had been a boyhood chum of Harry Sinclair Lewis, and he still lived in Sauk Center, the setting for Lewis’ 1920 novel, “Main Street.” I was in town to interview Ben for an article about the Nobel laureate’s early years. Dubois was a revered figure in the city because he kept his bank open during the Depression, and never foreclosed on a single farmer.

Then, recalling those Depression years, Ben said, “We had a farmer here, old Earl. The man couldn’t read nor write, and yet, when I looked at his account after we came out of the damned thing, Earl was worth more then than before. I had to know how he did it, so I said, ‘Earl, ‘how was it you prospered when everybody else went to hell in a hand basket?’ Earl grinned and he says, “Well, Ben, I’d see a thing for a dollar, so I’d buy it and turn around and sell it for two dollars. I made my one percent and was satisfied.”

About 20 years ago while new tires were being installed on the car, I noticed a cork board in in the shop’s lobby. It was dominated by a color photo of a house posted by a realtor. Since Judith and I were contemplating a new home, I read the ad. The text described a spacious dwelling atop a bluff overlooking the Mississippi river. In addition, there was “… a brand new modern kitchen with every modern convenience.” In addition, the house featured, “Brand new aluminum siding giving you maintenance-free maintenance.” The pitch concluded with, “At $259, 900, this house is perfection at its best.”

I briefly pondered the condition of the penultimately perfect homes my wife and I had recently toured, and wondered if any pluperfect or even super pluperfect houses were listed with other realtors.

By the summer of 1992 Angelo Zucatti was the new owner of a Victorian house bed and breakfast in Cooperstown, New York. He had recently retired as maître‘d after 52 years at El Morocco, the legendary, private night club in New York City — habitué to the world’s rich and famous, with whom Angelo routinely rubbed elbows.

Judith and I were weekend guests in the house where his wife Laura, a Cordon Bleu chef, ran the kitchen, while Angelo tended gardens on the property.

The sitting room walls were lined with eight-by-ten photos of Angelo posing with practically every iconic name of the first three-quarters of the 20th century. Most were inscribed by celebrities like Joe DiMaggio, Cary Grant, Bing Crosby, Maurice Chevalier, Lauren Bacall, Marilyn Monroe, Harry Truman, a young Ronald Reagan. Surely Angelo had scores of reminiscences regarding the El Morocco elites. However, he seemed a private man, content to spend most of each day in the gardens. Angelo was rarely present when I was around and I hated to think I’d be leaving Cooperstown bereft of anecdotes.

On our last evening in town, I was in the sitting room with Gene Feist, the late co-founder of Broadway’s Roundabout Theater, when Angelo joined us.

Gene and I were discussing differences between British and American actors, surmising that the Brits seemed committed to their art, while Americans were more interested in becoming stars. Angelo didn’t directly respond, saying instead that those of his acquaintance were mostly generous and friendly. Then he leaned forward …

This got my attention. Angelo continued.

“We walked around the deck for a few minutes, and I noticed a rather plump man sleeping in a deck chair. He had a newspaper covering his face, and Onassis walked over and removed the paper. ‘Winston,’ he said, ‘I want you to meet my friend Angelo.’ ”

Now there’s an anecdote for the ages.

Michael Fedo is the author of nine books, most recently “Zenith City: Stories From Duluth”(Minnesota University Press). His subjects vary widely and include “The Lynchings in Duluth” and “The Man From Lake Wobegon.” He lives in Coon Rapids.

Where the ear and the anecdotes play