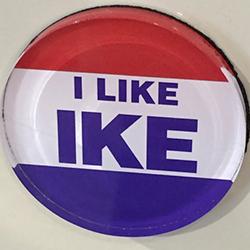 At a Republican debate on Nov. 10, Donald Trump invoked the memory of President Dwight David “Ike” Eisenhower to support his own call for tougher measures regarding immigration. Specifically, Trump cited a deportation program (derogatorily labeled “Operation Wetback”) that took place during the Eisenhower presidency to argue that his own plan to round up and deport illegal immigrants would be humane and doable. Trump stated his “like” for Ike, calling him a “great” president.

Trump’s historical reference to Eisenhower brought a quick response from critics, who stated that “Operation Wetback” was brutal. President Barack Obama repeated his oft-used phrase that “this is not who we are” to counter Trump’s anti-immigrant rhetoric. However, the drum beat to take strong action to close the borders has now been further fueled by speculation that terrorists must be employing the mass migration of desperate Syrian refugees to export their vile disregard for humanity.

I formed my impressions of presidents and presidential candidates through personal observations and by hearing the perspectives of my parents, teachers and colleagues. When Eisenhower was president (1952 to 1960), I was too young to assess him. My impressions of Eisenhower have been shaped by watching World War II movies and my father’s periodic lament that Eisenhower simply did not do anything while serving as president. My parents would say that, during the decade of the ’50s, the country needed a rest and Eisenhower was the country’s Sominex tablet.

Was it appropriate for Trump to channel Eisenhower and his policies in any respect? What would Eisenhower think of Trump? To look deeper into these questions, I accelerated a long-range plan to visit the Eisenhower presidential library and hit the road the following weekend.

The Eisenhower campus in Abilene, Kansas

Presidential libraries tend to highlight the positive contributions of an individual. For the cynic, they are monuments to revisionist history. However, each library I have had the opportunity to visit does try to capture the character of the individual who held the office of the president.

The Eisenhower campus itself creates two distinct differences between Eisenhower and Trump. First, Eisenhower’s life from the time he was 21 years old was dedicated to public service. Conversely, any future tribute to Trump would have to highlight his commitment to the world of unfettered capitalism. Second, the entire setting for Eisenhower’s campus is understated, containing, for example, the very small, white house where Eisenhower grew up. One could presume that the main issue regarding a campus for a Trump presidential library would be whether it would have 27 or 36 golf holes.

Eisenhower served during the heart of the cold war. The communist “red scare” made the public tentative and fearful, which impacted both domestic and foreign policy. Not surprisingly, the Eisenhower museum emphasizes Eisenhower’s effort to have kept the country out of war through a tough deterrence policy.  As Eisenhower stated after leaving office:

The United States never lost a soldier or foot of ground in my Administration. We kept the peace. People asked how that happened — by God, it didn’t just happen, I’ll tell you that.

There are significant differences between Trump and Eisenhower with regard to how to address the country’s enemies. Eisenhower knowingly used the threat of military intervention to avoid conflict, while Trump appears ready to simply jump in with both feet. Eisenhower’s frame of reference was being a firsthand witness to the scourge of war, while Trump’s grounding appears to originate from watching reruns of Rambo movies. Of course, if a leader appears slightly unstable, that may deter enemies who would be unable to predict a likely response. Trump consciously acting irrationally could be part of a sophisticated negotiating technique, but that would be totally different from the image of Eisenhower portrayed at his library: measured behavior often focusing on finding an agreeable middle ground.

“Operation Wetback,” which Trump discussed, was a short-lived deportation program instituted during the Eisenhower administration largely in response to complaints from Mexico that Mexican workers — some of whom had been allowed into the United States during World War II to assist our country’s war effort — were not returning to Mexico. While thousands of Mexicans were rounded up and returned to Mexico, “Operation Wetback” ended in part because it was ineffective in stopping deportees from returning to the United States. Many human rights violations occurred in the implementation of the program.

One cannot find a meaningful reference to “Operation Wetback” in the Eisenhower museum. Archivists attempting to retrofit Eisenhower apparently do not think that “Operation Wetback” was a critical program during Eisenhower’s administration, nor part of a past to be celebrated, nor reflective of Eisenhower as a president. That is distinctly unlike Trump, who is boisterously promoting the shunning and deportation of immigrants as a cornerstone of his campaign.

Another timely issue that surfaced on my visit to Abilene is the manner in which Eisenhower dealt with Sen. Joseph McCarthy. As mentioned earlier, there was a “red scare” taking place in the early ’50s and many sought to exploit the public’s fear for political advantage. According to a New York Times report, 185 of the 221 Republican representatives elected in 1952 sought appointment to the House Un-American Activities Committee. McCarthy made a name for himself by dragging well-known people before his Committee on Government Operations and smearing those people by suggesting they were communist or communist sympathizers.

Eisenhower did not like McCarthy or his tactics. While Eisenhower is appropriately criticized for not taking on McCarthy promptly or publicly, the Eisenhower museum emphasizes the behind-the-scenes efforts by Eisenhower to try to derail the defamatory activities engaged in by McCarthy and the House Un-American Activities Committee. For example, shortly after public inquiries about the loyalty of actress Lucille Ball occurred, Eisenhower had Ball and her husband, Desi Arnaz, for dinner at the White House, subtly discrediting those exploiting the public’s fear of communism.

While Eisenhower quietly worked to derail McCarthy, describing him privately as a “pimple on the path to progress,” Trump is today’s blemish. When Trump uses his platform to baselessly assail a religion by tying it to terrorism, baselessly states that an opponent is “pathological” like a “child abuser,” or baselessly questions whether our president was born in this country, he is stoking fear though the use of innuendo, requiring his targets to prove their innocence. “Trumpism” is the contemporary cousin of “McCarthyism.” Despite Trump’s recently feigned “like” of Eisenhower, it is quite certain that Eisenhower would not have returned the affection, given his disdain for McCarthy and his tactics.

Perhaps, as written on the National Archives Building in Washington, D.C., “The Past is Prologue.” Just substitute the words “Islamic terrorist” for “communist” and “Deportation Force” for “Operation Wetback” and we can head back in time.  The country now faces the unfortunate possibility of reliving a tragic chapter in our past — a chapter that history suggests Eisenhower would want closed, but Trump wants to reopen.

Robert Moilanen is a Minnesota attorney who has worked in both the public and private sector and has recently visited seven presidential libraries and numerous civil rights sites.

Exploiting fear: Looking back at the ’50s