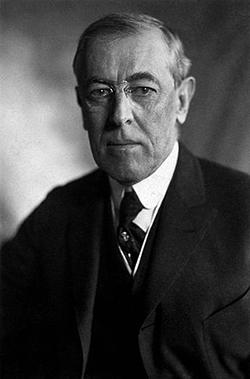 Of Wilson, who also served as president of Princeton, let’s just say that none of his Fourteen Points had anything to do with expanding freedom for African-Americans. But then again American politics in the early 20th century were not exactly awash in fair-minded leaders when it came to race, at least as gauged by present-day criteria. If there were, Wilson presumably would not have been able to segregate the military and civil service as he did, which is at the heart of the students’ anger and campaign.

A question. As contentious issues go, same-sex marriage has been around much longer than the current Wilsonian flap. But given that few political or other leaders supported it until the historical equivalent of five minutes ago, how could any university – if one were to use Princeton students’ present-day standard – have had anything morally pure to do with luminaries who opposed it, one might construe, in their homophobic days?

What were commencement committees, for example, thinking in picking speakers and honorees? Why were they so obstinate in refusing to accurately soothsay? By what ethical lassitude did graduating seniors not turn their backs on such morally guilty graduation-day speakers – which is to say just about everyone who offered 20 minutes of profound life lessons – including Barack Obama himself?

What about FDR? Or Richard Wagner?

Or switching presidents, how is it we’re still celebrating Franklin Roosevelt when he barely lifted a cultured pinky when he had chances to save significant numbers of European Jews and others during the Holocaust – all the while, not incidentally, keeping the armed forces segregated? Why does FDR have a monument in Washington? Why do DFLers still have dinners named after him?

Putting aside the honoring of famous, if flawed people by naming buildings or schools of public affairs after them, as is the case with Wilson, what if colleges and universities really did use present-day standards in determining whom our future leaders should be obliged to study and encouraged to appreciate?

FDR might not have been anti-Semitic as such, but composer Richard Wagner certainly was. Why are students at our finest conservatories expected to learn about his Ring Cycle? “Not another note,” at least a few of them should demand.

As with Wagner, T.S. Eliot never even thought about endowing scholarships at Yeshiva University (if you catch my drift). But literature majors in places like Princeton are still expected to study the love life of his pal J. Alfred Prufrock? “Poof,” dissidents ought to say, since sanctifying P.C. at Ivy heights would seem to call for consistency.

And my goodness, there’s Shakespeare’s Shylock and the expectation that students, Jewish ones very much included, read “The Merchant of Venice.” If only such a requirement were but a “micro-, not macro-aggression,” the Bard might be granted a pass and remain in syllabi given his large and living corpus. (For readers unfamiliar with the emergence of “micro-aggressions” in American higher education, boy do you have a treat coming.)

By the way, why is “Huckleberry Finn” seemingly getting a pass these days? What did Mark Twain ever do to deserve such disrespect?

The temper of the times and the temperaments of many students being what they are, it’s not hard to see why some Princeton students are demanding Woodrow Wilson’s “shades of Stalinesque” removal, as syndicated columnist Barry Casselman might put it. Their efforts have caused me to recall something I regret not saying when I had the chance a while back.

The topic on the table was student laments at a major university. A senior official had just told me and others what they were upset about and I said something about how some number of students always complain, as that’s just what they do. The official then asked, “But what should I say when they come to see me?”

“Tell them to grow up,” I craved responding, but he had already called on others for their advice.

Mitch Pearlstein is founder and president of Center of the American Experiment. His most recent book is “Broken Bonds: What Family Fragmentation Means for America’s Future.”