John Barham wears no shoes in his office; he practices law in his socks. On a recent Wednesday evening, his socks were dark gray wool, soft-looking. Beneath his desk one foot occasionally rubbed the other, two cats playing. He said the areas of law he specializes in — criminal defense and immigration — are designed, it sometimes seems, to be especially confusing and pernicious, instruments that disempower as much as they protect. “It’s more like magic than anything else,” he said. “There’s all these tricks you need to know.” And so, as best he can, and often for no money, Barham helps protect his clients from (misapplications of) the law. When he is not working as an attorney he is volunteering as an attorney — for the Black Lives Matter movement, for The Advocates for Human Rights. 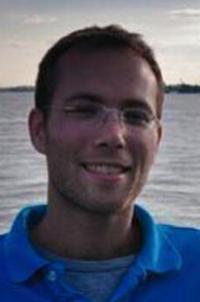 This week, in his volunteer work with The Advocates, Barham won asylum for a 13-year-old who fled to the U.S. alone to escape violence in Central America. And on Friday he and his punk band, Murrieta, will take part in a benefit he organized; proceeds will go to The Advocates’ Refuge and Immigrant Program.

Barham is in his late 30s, bald, bespectacled, friendly, and, at least at the end of the day, a touch tired. He speaks quickly and with the trace of a southern accent (politics becomes pawlitics.) The clutter of his office, at the intersection of Lake Street and Lyndale Avenue, is a homey clutter. The law in this office is not so intimidating as in other law offices, not quite so infallible-seeming, not quite so buttoned-up. It follows that there are no buttons on Barham’s shirt. In addition to his socks, he does his lawyering in a T-shirt. It is red and bears the Sriracha hot sauce logo — a rooster — and covers his belly, just.

‘A music of resistance’

And then, in the evenings, when he is performing with Murrieta, Barham wears no shirt at all. Videos on YouTube show him plodding on stages in dark rooms, bare-chested, a microphone in hand. The music is guitar-heavy, drum-heavy, and loud — but it is also inviting. The music is loud because, in part, the music is a cry, a cri de coeur — it is political. Punk, says Barham, “is a music of resistance, a subversive music, analogous to hip-hop … the scene does well where there are lots of immigrants. It tends to flourish in places where immigrants are dealing with abuse or hostility. … Even just in the punk scene here [in Minneapolis] there are a lot of Latino immigrants, as well as immigrants from other parts of the world. And to a large extent that’s who we’re playing for.”

His involvement in the punk scene stems, Barham says, from the same roots that led him to practice socially productive law; in some respects when he is practicing law he is practicing punk, and vice versa; when playing punk, he is performing social outreach. (The group takes its name from Joaquin Murrieta, a sort of Latino-American Robin Hood, who during the gold rush looted rich and unscrupulous prospectors and then distributed the purloined funds among the poor.)

Barham grew up in South Carolina in the late ‘70s. Half his family was Vietnamese. This entailed violence. “Racism as an issue was very clear to me before I was in kindergarten,” he says. “My childhood was fist-fighting most of my neighborhood over them wanting to kill my cousins and brothers and sisters because of where they were from. That remained a troubling thing for really the rest of my life.” After graduating from college he spent more than a decade living in South America. In Argentina he spent two years as a social worker for a human rights group, providing aid to children who lived in train stations. In Chile, in addition to working as an English teacher and translator, he and his crew provided de-facto security to the country’s gay rights movement.

While in South America, he met the woman who would become his wife (and, later, his ex-wife). She had a son, and they decided to raise him in the States. Barham enrolled in law school in eastern Tennessee. “Law school was the worst part of my life, by far,” he says. “The racism and xenophobia faced by my ex-wife and son there were just tremendous. And it was the first environment I’d been in where greed was explicitly OK. We left the first day we could, and drove right here.”

Minnesota: a kind of oasis

Minnesota, he says, “and the Twin Cities in particular, is kind of an oasis in the United States in terms of tolerance and acceptance and diversity.” He notes the imperfections — “I feel like every time I pick up the newspaper or see the news there’s something new about a Somalian person being insulted or injured,” he said; he began volunteering for Black Lives Matter after several of their supporters were shot. But he maintains that, in his experience, it ranks among the most inclusive of American cities that he has lived in.

On Friday (Jan. 29) at The Hexagon Bar in Minneapolis, Murrieta will play a concert to raise funds for those in need of legal representation but who cannot afford it; proceeds from the show, which Barham organized and which features a multitude local punk, hip-hop, and reggae acts, will be donated to The Advocates for Human Rights’ Refugee & Immigrant Program — a program that offers free counsel to low-income immigrants and refugees who face persecution in their home countries. It can with justification be said that Murrieta will be carrying on the legacy of its namesake.

Max Ross is a volunteer with The Advocates for Human Rights.