The following is a graduation speech delivered by R.T. Rybak on May 14 at the University of Minnesota-Morris.

Let me start off by saying you all look just great! All dressed up, here in your caps and gowns, mostly really good shoes. I’m not sure you looked exactly like this the night before finals … or the night after … or whether the floor of your dorm was filled with dirty socks and underwear all semester. But right now, here in front of parents and grandparents, aunts and uncles, that brother or sister who always got better grades than you, or who already has a job … you look downright respectable.

So in the few minutes I have with you here today I want to do something that sounds not the least bit respectable: I want to spend the next few minutes talking to you about a four-letter word.

Don’t get too excited because it’s not really THAT kind of four-letter word, but it is a word that you don’t hear a lot these days in either respectable or unrespectable settings. It’s a word that seems a long way from the way so many of us are living our lives, a word that sounds out of favor. I doubt many of you used it on your final papers, or saw it on your finals. But it is a word I want you to think about because in many ways the future of the world you are about to enter, the world you will be leading — that future depends on that this four-letter word. The word is “hope.”

I especially started thinking about that four-letter word “hope” a couple weeks ago when I spoke to a group of young people about eight years younger than most of you. It was a truly remarkable event at the University of Minnesota in Minneapolis where Parkway Montessori and Community Middle School students did videos about the big issues they felt the world faces today. The level of insight was astonishing as they explored some of our most complex issues: Homelessness, body shaming, racism, stuttering, gun violence, global warming, climate, income inequity. One particularly insightful piece was a from a young Hmong woman who challenged her culture’s gender roles.

I was filled with awe that people so young had such insight, saw through the fallible culture they were raised in. They were wise beyond their years, or, maybe better, wiser because they hadn’t lived so long they stopped seeing what is wrong or unjust. 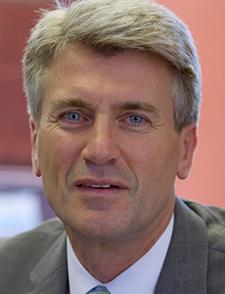 As I left Northrop Auditorium and walked across campus, I began to also recognize that as insightful as these presentations were, there was something missing. It was that four-letter word: Hope.

The collected picture painted by these fresh minds was of an unjust world, racked by seemingly intractable challenges. I thought of those young people making those videos, and today I think of you, and I ask:

Has my generation messed things up so badly that we are sending you out into a world where you question if success is even possible? Are the problems just so big that there just is no hope?

You enter the world in a seemingly unprecedented period of reckoning in which I hear your generation questioning almost every basic assumption about the way our world is working.

These are monumental questions we have placed on your young shoulders. And I wondered if you are facing these huge questions without something that has helped so many previous generations move confidently into the world. Something called “hope.”

For most of our country’s history we have sent each generation out into the world with seemingly limitless possibilities. Settle a vast continent, build the greatest economy in the world … It seemed the sky was the limit, but then we went even further and landed on the moon.

Can your generation, looking in such depth at some extraordinary challenges, feel that optimism, that sense of limitless possibilities that carried so many before you to such great heights? Or are the challenges you look at so squarely, well, hopeless?

Here’s a “spoiler alert.” I’m not going to depress you on Graduation Day. The story of your generation is going to turn out just fine, even though none of us can possibly say how. In fact I am 100 percent confident that things will turn out for you better than any generation before you, because your generation, more than maybe any generation in history, is willing to take the most important step ever needed if we want change. You, more than maybe anyone, know that you can’t change if you don’t understand, in the starkest of reality, why we need change in the first place.

The dirty little secret is the “good old days” weren’t always so great.

You are absolutely right to challenge an economic system that leaves yawning gaps between haves and have nots, that are growing, not shrinking.

You are absolutely right to challenge the education system. If everything was so great I wouldn’t be spending all day trying to close inexcusable achievement gaps.

Here at Morris you don’t just talk about how we have been destroying our planet. You’ve rolled up your sleeves, disrupted the status quo and, today, 60 percent of your energy comes from renewables.

Here at Morris you have challenged the basics of race and racism. So today, in this institution that started generations ago as a boarding school that robbed native people of their culture, I look to my right at this graduation and see a native drumming circle. Because you have challenged the past, today the walls of this institution aren’t about keeping native culture out; they welcome the voices inside the walls so we can learn from those who nurtured our planet for generations.

Your generation has chosen to ask the deeper questions most others before you have avoided. You understand the difference between blind faith and faith in your convictions. The first is easier; the second is the path to true change.

You haven’t chosen to make it easy, so your path will be tougher. Here’s why that matters:

Think of a beautiful new house. A couple years after it is built a few bricks fall off the wall, so the owner replaces them. A couple years later it happens again and, once again, they get replaced. Eventually the owner realizes the bricks are going to have to keep getting replaced because there is something structurally wrong. The only way to solve the problem is to take the much harder course of stripping all those bricks completely off the house and finally fixing the foundation.

I already know what your generation would do with that house because you are stripping so many parts of our culture down to the foundation, challenging the quick fixes, willing to start over from the ground to finally get it right.

Yours is not an easy path. You have few role models, but I want to leave you with two.

Last night my wife, Megan, and I stayed overnight with our friends and heroes Luverne and Mary Jo Forbord on their farm, Prairie Horizons, about 30 miles from here in Starbuck. Five generations of Luverne’s family have lived on that farm and for most of that time the family ran a conventional farm like most of their neighbors.

Luverne and Mary Jo started out running a conventional farm, but about 12 years ago they decided it was time to challenge most of the assumptions of the past. They set out to restore the homestead to its native tall grass prairie ecosystem. Today, cattle graze freely in rotation on natural perennial grasses in fields where commodities use to grow. Their cows get no hormones, antibiotics or drugs. The Forbords also started an organic orchard where they test different varieties of apples, apricots and, get this, an experimental variety of Minnesota peach.

Life isn’t easy, especially because almost everyone around them is doing it a different way. Last night Luverne was up at 2:30 to cover the experimental crop of aloe vera plants Mary Jo just planted outside after carefully tending them indoors during the winter.

As Luverne went back into his fields this morning I told him that it looks like asking those big questions for all these years is starting to pay off. He turned and said: “That’s what gives me hope.”

If the Forbords can see hope, after all these years of fighting tough, often very lonely battles, not always knowing the future but certain they don’t want to repeat the past, then I believe you can too. But that hope will only come if you realize asking the tough questions was only the beginning of the story. Don’t judge today whether there is a reason for hope, any more than you should have judged that house when all the bricks were randomly scattered in front of that new foundation. Find the hope in knowing you won’t repeat the mistakes of the past, and use that to carry you until you can make your way, through the unknown, to a better future.

As I woke up on Luverne and Mary Jo’s Prairie Horizon Farm this morning, I looked out across the gently rolling hills and could see for miles in every direction. You know what that is like because you have had that infinite horizon for your whole time here on the edge of the prairie at Morris.

You have gone to school in a special place because this is where the woods meet the prairie. That meant pre-settlement, you would start on the East Coast and walk through those dense woods in near darkness for weeks, barely able to see in front of your feet. Then you would come to this place we now call Minnesota, come out of the woods, and, as the oak savanna gave way to the prairie, for the first time, you could see as far as the eye could reach.

Memorize that view and always remember that Morris is where vision begins. You can’t see where that horizon leads but your generation has already shown you aren’t so afraid of the unknown that you want to go back into those dark woods.

Remember, too, that big visions only truly start by looking in the mirror.

And that’s what makes this aging guy look at you, and your generation, and all your deep questions, and even your rejection of much of what my generation has done, and see nothing but hope.

R.T. Rybak, mayor of Minneapolis from 2002 to 2013, is the executive director of Generation Next. Beginning July 1, he will be CEO and president of The Minneapolis Foundation.

A four-letter word for today’s graduates